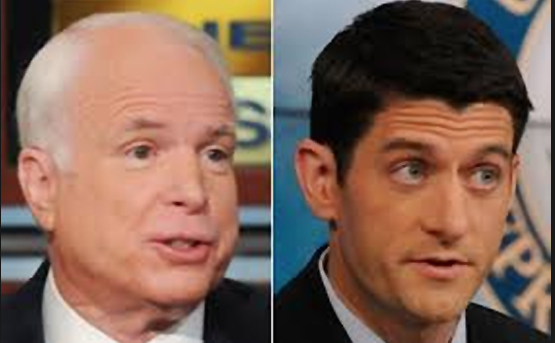 Democrats are winning the war over the wall.

Despite President Trump’s request for more than $1 billion to fund the Mexican border wall this year, GOP leaders are expected to exclude the money in the spending bill being prepared to keep the government open beyond April 28.

Speaker Paul Ryan (R-Wis.) says the choice is pragmatic and the money will come later.

But the issue has become a political thorn in the side of GOP leaders who are facing pushback from Republicans voicing concerns over the diplomatic fallout, the disruption to local communities and the enormous cost of the project, estimated to be anywhere from $22 billion to $40 billion.

With Democrats united against new wall funding, it’s unlikely the Republicans have the votes to get it through and prevent a government shutdown.

Among the loudest GOP skeptics are those representing border districts. Reps. Will Hurd (R-Texas) and Martha McSally (R-Ariz.), for instance, hail from districts that span a combined 880 miles of the U.S.-Mexico border. They’re pressing the administration to justify the huge costs.

“We recognize the need for robust border security and infrastructure to ensure public safety and increase cross border commerce,” the lawmakers wrote recently to top administration officials. “We also have an obligation to be good stewards of taxpayer dollars.”

Grover Norquist, a conservative anti-tax crusader who has supported comprehensive immigration reform, told The Hill that payment for the wall has not been an issue in his discussions with allies on Capitol Hill.

And some Republicans are concerned that deteriorating relations with Mexico may be too high a price to pay for the wall.

“It would not be good for America, or for Mexico,” Kelly conceded.

The thinly veiled reference to Andrés Manuel López Obrador, who tops most polls in the lead-up to Mexico’s upcoming 2018 presidential election, raised eyebrows in Mexico.

Videgaray added that, although Mexico considers the wall an “unfriendly gesture,” it is “not part of a bilateral discussion and it shouldn’t be.”

Democrats have latched on to Mexico’s consistent denial that the country will pay for a border wall — various officials and former officials have panned the notion since Trump first brought it up during the campaign — to take swings at the president.

In its budget request, the White House had sought $1.4 billion in 2017 funds for the wall. But hoping to prevent a government shutdown, Ryan has suggested the Republicans will largely delay the wall funding debate until September, when Congress takes up spending bills looking ahead to fiscal 2018.

“The big chunk of money for the wall, really, is … next fiscal year’s appropriations, because they literally can’t start construction even this quickly,” he told “CBS This Morning” last week.

Democrats are encouraged by those comments, but in the absence of specific legislation they remain leery that some Republicans, particularly those in the White House, will continue to push for wall provisions in the 2017 package.

“I would hope that they wouldn’t try that because … the American people don’t even support it,” she told reporters Thursday.

A Pew Research poll released in February found that 67 percent of voters oppose the wall, and only 35 percent support it.

Last month, Pelosi visited the border region in Texas and warned that the wall would damage communities without benefiting public safety.

In Texas, where much of the land along the Rio Grande is privately owned, the wall has met resistance from many locals, regardless of party affiliation.

Landowners have long fought the federal government exercising eminent domain to acquire land for border fencing. Plus, the river’s natural floodplain would require the wall to be built well north of the border, leaving some land on the Mexican side of the wall.

Land acquisition is less of a concern in other border states, where much of the land is owned by the federal government and, except for a short span on the Colorado River, the border crosses dry land.

Still, past administrations have found a double duty for the wall in some sectors by building border fencing atop levees that protect communities from floods.

In anticipation of potential litigation over border land, Trump’s Department of Justice budget request for 2018 included funding for “20 attorneys to pursue Federal efforts to obtain the land and holdings necessary to secure the Southwest border and another 20 attorneys and support staff for immigration litigation assistance.”