The March for Science officially stated its mission to “champion robustly funded and publicly communicated science as a pillar of human freedom and prosperity.”  Sounds great.  Who could disagree, right?

Get it? 21st century Science is as much about colonization, economic justice, and inter-sex phobia as cancer research, particle physics, or the Genome Project.  So the March devolved from a plea for better funding and exposure for true science into a forum for cliche social justice Leftwing themes.

Some scientists did question this perversion of science, such as well-known Harvard psychology professor Stephen Pinker:

But Pinker’s concern provoked a predictably vicious reaction, such as this response from Buzzfeed’s editor Summer Anne Burton:

The Leftwing Thought Gestapo doing what it does best:  destroy dissenters.  Here, they apply the inflammatory label White Supremacist to a respected scientist who dared question the political perversion of the March for Science.  Such punishing dissenters and squelching debate makes Science seem more like the Inquisition than Galileo.  And the March’s hard left turn into identity politics goes further.  Here, the March for Science officially condemns America for adhering to “a two-sex paradigm”:

Consider the message here:  The March for Science (1) condemns America, and (2) condemns anyone who regards biological life as fundamentally comprising male and female sexes. Notice how, as Science has done with Global Warming aka Climate Change, it forbids dissent or debate and allows no diverse views.

But where there seems to be no debate within the March for Science is its singleminded and fundamental theme of condemning the President.  For example, on LGBT issues it is irrelevant that the President has been remarkably sympathetic and uncontroversial.  Such facts do not shield him from March for Science condemnation: 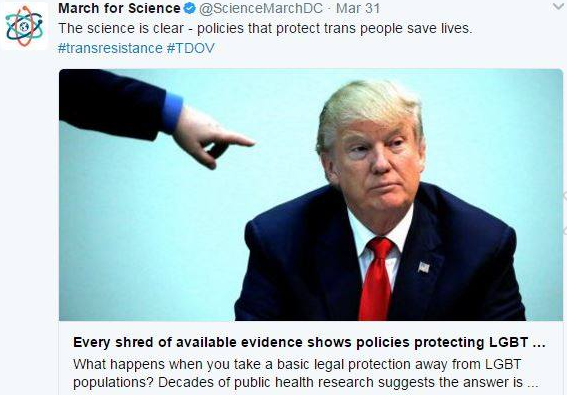 And so we see that Science, which loves to exalt itself as the Keeper of Truth, is allowing itself to be rebranded as a trashy tabloid screed.

And no non-science social institution apparently is safe from the March for Science, which appointed itself the judge, jury, and executioner of our system of justice:

The March for Science – in thoroughly unscientific fashion – issues a sweeping, broad-brush, categorical condemnation of our entire system of justice as a “tool of oppression” for “black & brown people”.  Was this conclusion reached in a laboratory somewhere?  Is this “settled science”?  The sheer arrogance to flippantly condemn the entire justice system is both ignorant and reckless.  Is it small wonder that people have become skeptical of Science?  And fueling this skepticism is the seemingly total absence of a moral compass: 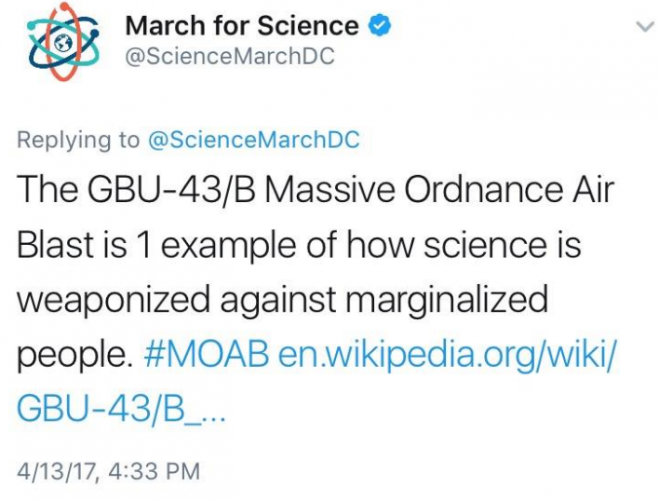 Here the March for Science throws itself off the moral cliff.  ISIS is “marginalized people”.  Let that sink in.  This is the group that has committed GENOCIDE, that has committed mass murder, mass enslavement of women and children as sex slaves, mass beheadings, mass crucifixions of Christians, mass torture and oppression, and wholesale destruction of cities and archaeological landmarks.  Not content with rushing to the defense of monsters who rape children and behead innocents, March for Science doubles down by condemning the use of weapons to stop them.

If Science as an institution cannot figure out that genocidal maniacs are “bad guys”; if Science frets over “inter-sex phobia” but not over child sex slavery, people rightfully look at Science – or perhaps more accurately at scientists – with justified suspicion.

Further fueling this suspicion has been scandals within the ranks of Science itself, most notably in the peer review process.  Science regards peer review of scientific research as fundamental to their integrity and reliability.  Yet recent years have exposed vast numbers of fraudulently peer reviewed science articles, aka #FakeScience.  In the most recent wave of scandals, most of this scientific fraud came from scientists in Iran, but recall the Leftwing Media reacting with unhinged hysteria at President Trump’s temporary travel delay for some of these Iranian scientists.  Is this irony and hypocrisy lost on scientists?  Apparently so.

The March for Science also attacks claimed cuts in Federal spending on science.  Again, however, this is mostly #FakeNews.  The Left recently flew into hysterics at Trump’s proposed $5.8B cut to the National Institute for Health budget.  The Washington Post headline screamed, “Seismic disruption in medical and science research.”  Baloney.  The proposed cut does not reduce available money for grants to scientists.  Instead, it trims pork, specifically it trims a portion of the $11B spent by NIH annually on “overhead” (aka pork) to universities and research institutes, which money does not go to scientists receiving grants.  Scientists, either complicit with Leftwing propaganda or too feeble-minded to educate themselves, ignore this nuance and instead engage in dishonest Marching.

And conspicuously missing from the March for Science is the front-and-center scientific issue of human life and abortion.  Abortion advocates deny the humanity of their victims as blobs of tissue or parasites.  The March for Science obsesses over social justice yet cannot utter a word for gestational human beings who are slaughtered in the millions under the guise of patently anti-science lies and fraud.  If it were a scientific fact that a fetus was not human, the Leftwing-infiltrated March for Science would say so.  But it cannot and does not.  And instead of standing up for this anti-scientific and horrific destruction of human life, the cowardly leaders of March for Science remain silent.

Science bills itself as a virtuous and courageous search for truth.  In the hands of the Left; however, Science becomes perverted and, as has happened in news media, morphs into political agitprop, or #FakeScience.  But is Science’s sin its failure to recognize this Leftwing politicization or, worse, its willing acquiescence to it?  The Left obviously treats Science as a malleable commodity to advance political agenda.  The scientific community, by adopting wholesale and uncritically the Leftwing political agenda into its March for Science, erodes its own credibility and integrity.

Find a cure for cancer, yes please, but Science proves itself ill prepared to participate in public policy.  So, keep out of politics, Science.  Stay in your labs and keep off the streets with your fatuous March.