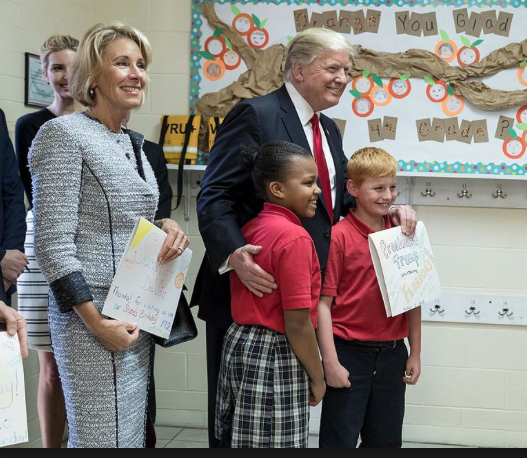 Many people are wondering since Donald J. Trump won the presidency and appointed DeVos to lead the department of education: Is this good or bad? What are the intentions for direction going forward?

Of course you can be sure that the teachers unions are flipping their lids. Because anything Trump puts forward is going to be fought tooth and nail.

Here is the sad part that will make anyone who reads my articles wonder if I have lost my mind. There is one piece of the voucher plan that DeVos is putting forward that I agree with the unions on.

Most conservatives, when they hear me say that, completely dismiss me and decide that I have turned into a progressive union hack and tune me out. Or they argue and throw a bunch of “facts” at me and why they think, nay, why they know, that I am dead wrong. The facts that they use make sense only if the education system wasn’t set up the way that it is.

In simple terms, HB 610, being put forth by representative Steve King (R-IA) and fully backed by Betsy DeVos and the Trump administration, activates school vouchers and rolls back the disastrous Michelle Obama lunch guidelines. For the purpose of this article we are ignoring the lunch program rules. Because, come on, that program was garbage anyway.

HB 610’s purpose is this: To distribute Federal funds for elementary and secondary education in the form of vouchers for eligible students and to repeal a certain rule relating to nutrition standards in schools.

School vouchers means that a family will receive federal monies (i.e., their own money, really, but the government never sees it that way) to use wherever they choose to send their child. Now parents can decide to send their child to that fancy private school up the road, or perhaps the Christian school across town.

As long as the language in those statutes regarding ways to ensure an equitable education, an education based on best practices, or any other special terms they use, that are tied to those vouchers, any school that accepts those vouchers has to now play by the federal government’s rules and provide the same outcomes based education that a public school provides.

In short, every school is now a public school. It is unclear to me at this point what a voucher will provide to a homeschooler. If it follows what is happening in the “follow the child” sense then parents will have to select government approved curriculum. Christian homeschoolers won’t be able to alleviate the financial burden of costly homeschool programs unless they decide to follow the government’s Pied Piper.

Another misconception is that because DeVos has said she’s against Common Core, the Common Core will end. Following that line of thought let’s say that she declares no more Common Core in schools.

Again, unless they go back and rewrite the provisions and use different language, completely getting rid of the current language; all of the behavior programs, outcomes based education, arbitrary standards, whether named Common Core or not, will still be in play.

As an aside, used to illustrate my point here, Trump rolled back the transgender bathroom law requiring schools to let boys into girls’ bathrooms and girls into boys’ bathrooms. He said he’s against that rule and it’s going to be undone. DeVos came out with a separate statement regarding that issue and our “moral obligations.” I’m not following that bunny trail right now, but suffice it to say that schools are now in the business of guiding and deciding just what morals are right for children. Part of her statement:

“We have a responsibility to protect every student in America and ensure that they have the freedom to learn and thrive in a safe and trusted environment. This is not merely a federal mandate, but a moral obligation no individual, school, district or state can abdicate…We owe students a commitment to ensure they have access to a learning environment that is free of discrimination, bullying and harassment.”

That is the same language that gave us the bathroom bill in the first place. To learn more about this read the Invisible Serf’s Collar blog.

Now back to the main point of this article. It is true that public schools will lose a portion of their funding because money will follow the student. But as long as that money, those vouchers, are tied to the feds and the feds don’t completely dismantle all of the education reform and start again, your child will be going to public school. Even if it’s billed as an elite, private academy. It will be teaching the student the same things as public, perhaps in a slightly different way, but the standards they are required to meet will be the same.

This is an oversimplified explanation. But I’m making it like this so we don’t get lost in the weeds with all of the confusing eduspeak and so you can communicate it to your friends or family in a way that they will understand.

Is DeVos aware that ending the ESSA from 1965 is not enough to undo all of this? Maybe. I do not know what she knows. However, if she truly wishes to rid the U.S. of Common Core and give real school choice to parents she needs to completely untether the vouchers from the federal government and completely re-author the government’s requirements for education.

Now, all of this is assuming we agree with there being a Department of Education in the first place. We can argue all day long about vouchers, lunch programs, standards, and other things. We can be happy or we can be upset at Trump’s pick for education secretary. But that’s giving credence to the fact that the DOE should exist in the first place. And honestly, it’s quite like arguing over who should be the captain of a sinking ship.

Birth of Journalism in America: From Frankfurt School to Columbia U to Today