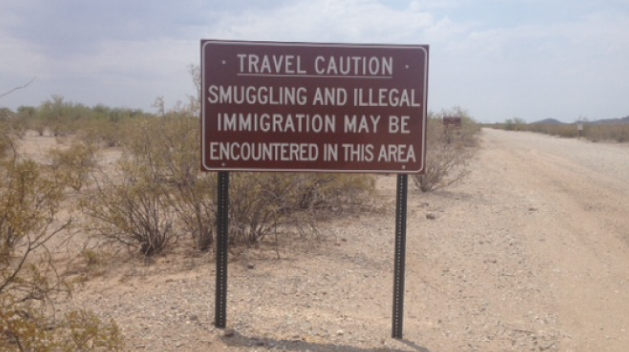 Arizona is on the frontline of the illegal immigration battle. Known for Governors willing to take stands against illegal immigration, including former Governor Jan Brewer and Arizona’s current Governor Doug Ducey, Attorney General Jeff Sessions will visit the state this week. Sessions will tour the border at the Port of Nogales, as did Department of Homeland Security Secretary John Kelly in February.

At the March 27, 2017, White House Briefing, Attorney General Sessions announced that cities planning on applying for federal funding, through the Department of Justice, must be in compliance with 8 U.S.C Section 1373 to apply for grants through the DOJ. (4:25 in video). This is in line with the DOJ guidance, put forward by the Obama Administration. In this spirit of compliance with the law, anyone would think those with liberal political points of view, would be willing to comply with a directive from former President Obama, as this was not initiated by the current administration, which so many immigration groups are opposed to supporting.

The statistics presented by AG Sessions’ at the briefing should cause all cities to abandon their “dreams” of being a sanctuary city for the safety of their citizens. He revealed a recent Homeland Security report showed during one week, more than 200 occurrences of cities not honoring ICE detainer requests for illegals “charged and convict(ed) of drug-trafficking, hit and run, rape, sex offenses against a child and murder” (1:05 in video).   The needless death of Kate Steinle, in San Francisco, could have possibly been prevented, had it not been for the actions of the city negligently choosing to be a sanctuary city. Ms. Steinle’s death was caused by an illegal immigrant, whose only reason for being in “San Francisco was because it was a sanctuary city”.

Crimes, such as those listed in the Homeland Security report, must stop. This is why the practice of sanctuary cities must be terminated. Immigration laws are not in a classification of law which can be overlooked. As a country, we cannot allow cities and states to ignore federal immigration laws. Cities, counties and states cannot look at immigration as an “optional” law to enforce. What will it take for politicians at the state and local levels to realize their tax paying, law abiding citizens currently outnumber illegal immigrants and they want immigration laws enforced?

For Arizonans, the only representation they have in Washington on the topic of illegal immigration are establishment members of Congress–long term sitting Congressmen who have lost touch with their constituents. Rather than truly wanting to build a fence on the border, they would rather ride the fence in Washington D.C. In January 2017, AZ Senator Jeff Flake said Congress has “other priorities” other than building a secure wall at the border, where he believed Congress would “be hard pressed to cough up the 10 or 12 or $15 billion dollars estimated” to build it.

In other words, Flake’s disagreement with President Trump on building a wall is that it’s not the best use of money. Better uses, in Flake’s opinion, would be “bed space for detentions, for surveillance, for drones, for cameras, for stations, for operating bases, for Border Patrol, but certainly, not to put a wall everywhere.”

What Senator Flake seems to have forgotten is that drones, cameras, and more Border Patrol are already in place. What we need is a defined, obvious border barrier and shutting down sanctuary cities. Unfortunately Senator Flake refers to cities which violate federal law and refuse to work with ICE when illegals are detained, as “so-called sanctuary cities.” With the mindset that these cities are “so-called”, don’t plan on Jeff Flake ever seeking the good of our nation or the State of Arizona. Obviously by labeling them “so-called” he doesn’t believe sanctuary cities even exist.

Senator Flake will be tested in his upcoming mid-term re-election bid by Republican candidate Kelli Ward. Dr. Ward challenged John McCain for his seat in the most recent election, holding him to just 51 percent of the vote. She is a very viable candidate to unseat Senator Flake in 2018.

Kelli Ward endorses Attorney General Jeff Sessions plan to no longer make federal funds available to sanctuary cities. Ward says, “It’s outrageous that taxpayers are forced to subsidize left-wing local governments who ignore our immigration laws and provide sanctuary to some of the most violent and dangerous criminals.”

Kelli Ward is a non-establishment candidate who listens to citizens. She is in touch with those whose money and safety are being squandered by the out of touch, left-leaning Republicans and liberals sitting on Capital Hill. Ward believes in deporting violent criminals and is against “offering sanctuary and rights to illegals, rather than defending the rights of American citizens.”

The Trump Administration is on the right path toward resolving the illegal immigration problems our country and its government officials have brought on themselves. Years of neglect by not monitoring immigrants and border concerns have allowed these problems to become out of control. Change will only happen through numerous visits to border states by Administration officials such as Attorney General Jeff Sessions and Secretary John Kelly, by voting out Senators like Jeff Flake, and voting in conservative minded individuals such as Kelli Ward. This type of change will protect our current citizens as well as welcome legal citizens to enjoy the exceptionalism of America.

Ex-Muslim Sandra Solomon: What Islam Taught Me About the Jews