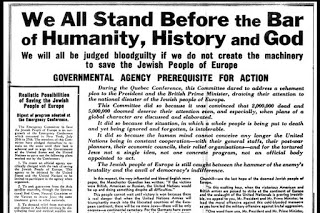 Millions of dollars have been spent building memorials to the victims of the Holocaust, even as Iran is spending its millions on building another kind of memorial to the Holocaust, in the form of nuclear technology that will be used to finish that piece of history that the Islamic terror state claims never took place.

Millions more are spent, by some of the same groups that claim an interest in Holocaust education, on bringing Muslim migrants to America and Europe to carry out the promise of an Islamic apocalypse in which, as the Hadith states, “The last hour would not come unless the Muslims will fight against the Jews and the Muslims would kill them until the Jews would hide themselves behind a stone or a tree and a stone or a tree would say: Muslim, or the servant of Allah, there is a Jew behind me; come and kill him.” That is what the Islamic Holocaust looks like. And it’s underway.

A Jew is murdered in France. Another in Jerusalem. And another and another.

The Final Solution, with its immediate extermination of the Jews, has been replaced by the Two State Solution, an intermediate process in which the land on which Jews can live in security is partitioned into smaller and smaller pieces.

The Lebensraum of Islam demands ever more breathing room. And fewer breathing Jews. Israel is carved up into smaller indefensible ghettos. The number of places where the world decides that Jews can be allowed to live, shrink. The rest become “settlers” who must be evicted for the sake of peace. Even if the place they’re “settling” is Jerusalem. The oldest Jewish city on earth.

And this Two State Solution, this intermediate process, has the almost universal backing of the major Jewish organizations who are so very deeply concerned about the Holocaust. It has the backing of the diplomats and politicians who put out canned statements urging that we learn the lessons of the Holocaust. The only lesson they have learned though is that another Holocaust needs better marketing.

It is comparatively easy to build a memorial. You hire the architect, raise the money, buy the land and then cut the ribbon. It is a much harder thing to do something about the need for those memorials in the first place. That is what learning the lessons of the Holocaust is about.

It is easier to build another memorial than to look into your heart and ask why two generations later, the majority of the American Jewish community was still too cowardly to stand up to a liberal icon in the White House… when the lives of millions of Jews were on the line.

From FDR to Obama, American Jewish leaders had two opportunities to stand up to a liberal icon and save Jewish lives. No amount of memorials can disguise the fact that they learned nothing.

The reassurances from American Jewish leaders that Obama meant well, that he will not sell out Israel and that he cares sounded familiar. The American Jewish leaders of the 30’s and 40’s echoed the same sentiments. Even as the St. Louis was turned back and its passengers were sent to the gas chambers, even as every effort made to aid or save Jews from the Holocaust was frustrated and shut down with the active complicity of the liberal American Jewish leadership who were loyal to FDR.

The same people who let millions die went on to light candles and issue their hypocritical sanctimonious statements of mourning for the dead. More candles have been lit. More memorials have been built. But the lessons of the Holocaust continue to go unlearned.

Regardless of which administration is in office, the Two State Solution and any support for the Islamic terrorists seeking to exterminate the Jews, as they have already exterminated many of the Christians in the region, must be fought. When we fail to do this, then whatever our politics are, we abandon our obligations to the dead and to the living.

The most important lesson of the Holocaust is that the details of how it happened don’t really matter. Had Hitler not come to power, had Germany not turned National Socialist, the Holocaust would have happened anyway. Stalin had one planned too before his death. Had it not been Hitler or Stalin, it would have been someone else. It still might be.

The Holocaust did not happen because of intolerance or fascism, as most liberals would like you to believe. It happened for the same overriding reason that any person or group of people is murdered. Because the Jews lacked the means of defending themselves against it.

There have been two Jewish responses to the Holocaust, on the one hand promoting tolerance and assimilation and on the other hand the State of Israel. Tolerance has done nothing to prevent the hatred and murder of Jews. In many cases it has actually served to promote it.

Every Muslim attack in Europe and America can be laid at the door of tolerance. When a Jewish woman is thrown out of a window in Paris or a Rabbi is beaten in Brussels, the true perpetrator is “tolerance”.

Today the two responses to the Holocaust are battling out to the death, Tolerance and Assimilation vs the State of Israel. And the State of Israel is getting the worst of it. The teachers of tolerance blame Israel for the failure of their own ideology, manifest in the rising hatred of Jews around the world. If Israel wouldn’t exist, somehow Jews wouldn’t be hated, their thesis goes. As if Anti-semitism had been discovered lying around in a dustbin sometime after 1948.

But it is tolerance meanwhile that is killing Israel. The left has pushed Israel to the wall, because it represents the inversion of their ideology, it represents the reality that the best hope of the persecuted is not in multiculturalism or in tolerance classes, but in taking responsibility for their own safety and survival.

100 Days Later the Russians Are Gone, Hillary Still Lost, So Now Who's to Blame for Pres. Trump's Success?