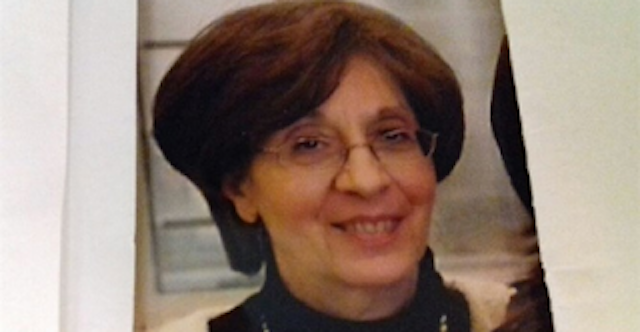 Sarah Lucy Halimi was thrown out of the window of the third floor Paris apartment while she begged her Muslim killer to spare her life.

The 66-year-old director of an Orthodox Jewish nursery was woken from her sleep when she was violently beaten by her twenty something Muslim neighbor who then dragged her to the window.

She died on the street outside the building where she had lived for thirty years.

The killer had allegedly shouted, “Allahu Akbar”. In the tragic comedy of denial that every Islamic terrorism investigation inevitably becomes, the authorities are still hunting around for his motive.

The media claims that her Muslim killer, like every other Muslim terrorist in the past two years, was mentally unstable. According to official reports, he was incoherent. According to other accounts, he told the police that he had followed the commands of the Koran. He certainly would not have been the first.

The street where Sarah Lucy’s broken body lay was the Rue de Vaucouleurs. It’s close to Belleville, a neighborhood whose name means “Beautiful town”, but which is better known these days as one of France’s “Zones Urbaines Sensibles” or “Sensitive Urban Zones.”

Or, without the euphemisms, parts of the beautiful town are really a “No Go Zone”. Or, if you prefer the official descriptions, a vibrant, colorful and multicultural community full of delightfully exotic foods.

Two years ago, smirking media reporters had a field day visiting Belleville to show that FOX News reports about No Go Zones in France were nonsense. “Look, at the couscous restaurants and colorful scarves, there’s nothing to worry about.”

Unless your delightfully multicultural Muslim neighbor decides to shove you through a window while shouting one of his religion’s exotic genocidal epithets about the Jews and all infidels.

Belleville was once home to many Jews. Then Jews from North Africa fled there after Muslim takeovers deprived them of the civil rights they had briefly enjoyed under French rule. And their Mohammedan oppressors followed. Some years back, the JTA ran one of its cheerful Islamophilic pieces about Belleville. “In one Paris neighborhood, Jews and Muslims live as they did in North Africa.”

That is indeed true. Just not in the way that the JTA would like its gullible readers to believe.

Yonathan Halimi, Sarah Lucy’s son, describes the killer’s family as being known for its anti-Semitism. “One day, one of the killer’s sisters pushed my sister down the stairs, and the next time she called her a dirty Jew,” he described. Sarah’s brother said that the killer called Sarah and her daughter, “dirty Jews”.

A decade ago, Ilan Halimi was captured and tortured to death by monsters who styled themselves the “Gang of Barbarians”. The barbarians left him dying by the side of the road with burns and stab wounds over most of his body while the police did their best to direct attention away from the inconvenient question of Muslim anti-Semitism. Since then the head of the Gang of Barbarians has managed to produce videos from jail in which he spews hatred at Jews and promotes Islamic terrorism.

On the day before Passover Eve, a thousand Jews gathered outside the building where the latest Halimi was murdered. As they memorialized Sarah Lucy Halimi, the colorful and multicultural settlers of this portion of occupied Paris, greeted them with thrown bottles and shouts of, “Dirty Jews”.

The same taunt aimed at the Halimis by the Muslim killer and his occupying clan. Truly, Jews and Muslims live in Paris as they did in North Africa.

But the media always has its own spin on the Muslim murder of non-Muslims. As Le Figaro’s account put it, the demonstrators “dispersed” after an “altercation” with the “young people of the neighborhood”.

The Jews, even though they lived here before the Islamic invasion arrived, are never the people of the neighborhood. Sarah Lucy Halimi had lived in her building for three decades. The Muslim family of her killer arrived at a later date and yet she remained an outsider to be murdered while Muslim violence and hatred is referred to only through euphemisms such as “youths of the neighborhood.”

When the marchers sang the French National Anthem in this terrible place, while an invading army of “youths” watched, jeered and hooted from the windows, some of its lines had an ominous resonance.

“Against us tyranny’s Bloody banner is raised.” And indeed, the black flags of Islam can be seen flying in France’s No Go Zones. “They are coming right into your arms. To cut the throats of your sons, your women!” They are coming. And we take them in. We feed them, we clothe them and then they kill us.

But there was also the rising chorus of Hatikvah. Sarah Lucy Halimi, like her son, like so many other Halimis, has found her final home in Israel. Before the arrival of Passover, she made her own exodus.

“An eternal flame will burn on the altar, it will not be extinguished,” her son eulogized her with a quote from the Bible at her burial in Jerusalem. “I can testify that she contained an eternal flame.”

The Muslim killer’s shout of Allahu Akbar, his declaration of his deity’s greatness at empowering him to throw a 66-year-old nursery school director out of a window, is really an indictment of Islam.

The first ever cry of “Allahu Akbar” was uttered during Mohammed’s massacre of the Jews of Khaibar. The murderous bandit who founded Islam had lain in wait for the Jews who cultivated palm trees in a desert oasis to emerge in the morning. When the Jews came out with spades to make the desert bloom, Muslims attacked the gardeners with weapons against which gardening tools are no match.

Mohammed shouted, “Allahu Akbar”. That does not mean, as the phrase is often mistranslated, that Allah is great. Or as it is even more woefully mistranslated, God is great. For Allah is only the deity of Islam. Instead Mohammed shouted that his god was greater than the God of the Jews because Allah had enabled him to ambush unarmed men. Or to throw a 66-year-old nursery director out of a window.

Khaybar is worth remembering as is an elderly woman falling from the third floor to 30 Rue de Vaucouleurs, and every atrocity and act of racist Islamic terror in the 1,389 years in between.

A war against humanity is underway. It began long ago. The killers shout, “Allahu Akbar”. And their victims fall from New York City skyscrapers and third floor Parisian apartments. They are run over in London and Nice, shot in San Bernardino and Paris and blown up in Boston and Brussels.

We must remember all of them. And we must win the war.

Clemson University: Expecting people to show up on time is racist

This Israeli Says, "Enough being PC, radical Islam has declared war in Israel"