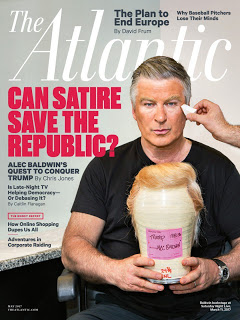 The Atlantic’s May cover features Alec Baldwin covered in orange makeup holding up a Trump wig. The cover asks, “Can Satire Save the Republic?” What is satire saving the Republic from? Republicans. While making America safe for Socialism.

After Bush won, Democrats fought back by doubling down on the ridicule. Before long they were getting their news from Jon Stewart’s smirk. Stewart spawned a whole range of imitators. Today you can find numberless clones of the Daily Show across cable and even on CBS and, soon, on NBC.

The left is devoutly convinced that this snickering can save America. That it’s better than the news.

The Peabody awards celebrated the Daily Show as “a trusted source of news for citizens united in their disappointment and disgust with politics and cable news”. But the media was the first in line to anoint the politics of contempt, ridicule and disgust as the future of journalism. Now the future is here.

The Washington Post, once a paper of record, swarms with snarky Stewartesque headlines like, “Jeff Sessions doesn’t think a judge in Hawaii — a.k.a. ‘an island in the Pacific’ — should overrule Trump”. Journalism is dead. And replacing it with snarky lefty spin hasn’t saved the Republic. Or anything else.

But the left’s faith in the power of its contempt has nothing to do with its tactical effectiveness.

The left remains convinced that Jon Stewart brought down Bush and Tina Fey brought down Palin because ridiculing the right isn’t just an ugly tactic. Instead it carries an almost religious meaning. Mocking Republicans can save us. Every ideology expresses its superiority through its own triumphalism. Sneering is the left’s own invocation of its own superiority. These are the grown up politics of kids who were convinced that they were better than everyone else because they looked down on them.

Much as Allahu Akbar denotes the superiority of the Muslim and the inferiority of the non-Muslim, the knowing smirk, the lifted eyebrow and the braying laugh of the audience when the unironic applause sign flashes is the prayer of the progressive to the cruel little god of his own ego. The ritual is tribal. A lefty dons the mock wig of the hated enemy and is ritually humiliated for the entertainment of the tribes of Manhattan, Berkeley and Marin County. The foe is destroyed in effigy. The video of his destruction is virally spread with titles such as, “Saturday Night Live Destroys Trump”.

And yet Trump, like all the other viral subjects of destruction, is never destroyed. The tribal ritual lets lefties vent their anger on a totem that, unlike Trump, can actually be destroyed by liberal laughter.

Satire isn’t trying to save the Republic. It isn’t stopping Trump. It’s saving the left.

Trump has proven even more indestructible than Bush. It’s hard to think of any insult that the left hasn’t hurled his way. A dictionary of them could run all the way from Abuser to Xenophobe. To no avail. Instead he has proven exceptionally adept at treating the left with as much contempt as it treats him. When lefties bemoans his cruelty and vulgarity, what they really mean is that he is beating them at their own game without wasting time on their pretenses to saving the Republic on Saturday Night Live.

Saturday Night Live is still the only place that progressives have been able to beat Trump.

Mocking Bush didn’t save the Republic from him. If anything, liberal disdain helped make him a two-term president the way that it helped put Trump in office. Obama won by taking the opposite road. He kept his contempt and arrogance just enough in check to appear aspirational during his original race.

Elitist contempt isn’t an effective tactic. American politics is anti-establishment. Stewart, Colbert, Oliver and Bee are only revolutionary to likeminded lefties in lavish condos. To the Tennessee coal miner, the New Mexico checkout girl and the Pennsylvania steelworker they convey the smugness of an establishment in all its insufferable disdain for flyover country, for the working class and for everyone outside that golden circle of the tall towers and hot clubs in the big cities that really, truly matter.

Liberals need to believe that even their pettiest acts are ennobling. Their Whole Foods organic avocados are saving the planet. Their fair trade yoga pants are saving indigenous tribes. Even their ridicule of the “Other” on TV is the redemptive and salvific process by which they save America.

This isn’t idealism. It’s elitism. They’re not spitefully lashing out because they lost an election. Instead they’re saving the country by watching a lefty hack who had become more famous for his credit card commercials, and racist and homophobic slurs do a tepid slurred imitation of Trump.

What a piece of work is a progressive. How noble in reason, how infinite in faculty. In action how like an angel, in apprehension how like a god. Beneath the Midtown Manhattan sound stages and green rooms, the million dollar contracts of the performers, the Ivy League degrees of the writers and the suave sophisticated five-star restaurants where they rendezvous is the dark and primitive world of the firelit circle in which enemies are bound and destroyed by a magic fed on the anger and hatred of the watchers.

The tribal signifiers of power have changed. The totems are class, cool and hip. And much of the country does not recognize their claim to lead the tribe. Each time America dissents, the left wears out its lip sneering at them. Contempt is the final refuge of failed tyrants. If you can’t rule, you can always sneer.

The left’s faith in contempt tells us far more about them than it does about the objects of their contempt. Art is a reflection of the artist. Some artists strive to create while others only destroy. The left remains convinced that it can create through destruction, that it can build a fair society through theft, an ethical society by destroying its values and a high-minded society through contempt.

It must believe in the redemptive power of its thievery, amorality and hatred. Or face a moral reckoning.

When they go low, we go higher, they chant, before laughing as Alec Baldwin snorts through his nose. It’s not funny or meaningful. It’s wish fulfillment. The left gets a Trump they can destroy in a world where they are bound to win because they are naturally superior.

For a movement obsessed with the redemptive power of its own power and convinced of the utter truth of its own imaginary visions, what could be more sacred than acting out the destruction of its enemies?

Is it any wonder that getting high on snarky delusions of potency and superiority appears so uplifting? Can satire save the Republic? Its fumes are almost as good as actually winning an election. But a better question would be can the Republic save satire?

Saturday Night Live’s war on Trump is also a war on comedy as mediocre casts turn to outside performers to portray recognizable political figures, based not on talent, but sheer recognizability.

Tina Fey had a passing resemblance to Sarah Palin while Larry David shared an accent with Bernie Sanders and was forty years older than the average SNL cast member. Alec Baldwin is a real life version of what progs think Trump is; angry, dumb and bigoted. A bad man with no self-control. And that is appropriate. The left’s effigy of Trump is a self-portrait. Their hatred of Trump is pure projection.

Baldwin’s bad acting won’t save the Republic.. He isn’t funny, but he doesn’t need to be. Funny is surplus to requirements. The point isn’t laughter, it’s barely sublimated hatred. Baldwin understands hatred far better than comedy. He knows that what his prog audience wants is not a good imitation but a contemptible one. One they can despise and feel superior to. And that is what he gives them.

Saturday Night Live could not satirize Obama to save its life. It can’t satirize Trump either for the same reason. The façade of humor is falling away from the left’s worship of its ideological idols and fanatical hatred of its enemies. And hatred isn’t funny. It’s clumsy. It’s stupid. And it’s ugly.

The First Amendment....Because We Need to Talk