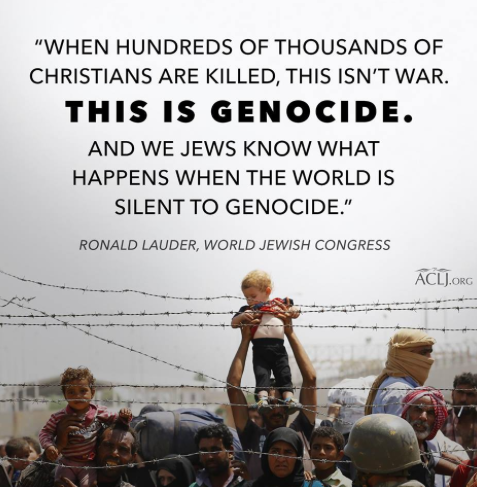 The Center for Studies on New Religions recently reported Christianity is the most persecuted religion world-wide.

The stats are staggering. In 2016 over 90,000 Christians have been murdered. CENSUR Director, Massimo Introvigne, told Vatican Radio that approximately 70 percent of the martyred Christians were from “tribal villages” in Africa. The Christians often refuse to fight back even to spare their own lives.

30% of those martyred were by Islamic terrorist groups. The study reported that roughly 600 million Christians were prevented from practicing their faith last year.

“Most of the persecution is occurring in sub-Saharan African nations. This is because of the rise of radical Islam in these countries. The same is also happening in Nigeria. In Syria and Iraq, ISIS is also murdering Christians. Saudi Arabia is funding the building of mosques and Islamic schools in these countries, which is the reason why radical Islam is becoming more prevalent.”

In only five years of conflict, the Christian population of Syria has been reduced by two-thirds from 1.5 million to 500,000.

Media Research Center’s report calls out the American media for not reporting the genocide of Christians abroad:

“What Genocide?: Between January 2014 and June 2016, the network evening news shows referred to persecution against Christians in the Middle East, Africa and South Asia just 60 times. Despite telling of murders, forced religious conversions and mass displacement, the networks refused to add up the thousands of atrocities to what they clearly amount to: genocide. Just six of the 60 reports used the word genocide. Put another way, over two years, they mentioned the Christian genocide on just four separate days. Even when Secretary of State John Kerry officially declared in March 2016 that ISIS was engaging in genocide, CBS didn’t report it.

Media Kept Calling Darfur ‘Genocide’: During the George W. Bush administration, the networks had no problem calling the situation in Darfur genocide, even before the U.S. officially called it that. Once it did, they referred to the Darfur ‘genocide’ 38 times in two years.

Journalists Should Have Known: If network reporters had even connected the dots of their own reports, they should have known and reported on what was really happening to Christians. By their own reporting, hundreds of thousands of Christians are ‘on the run’ from their homes, mass graves have been found, and Christians have been made to ‘convert or die.’ In addition, network journalists could have watched their own news magazine shows. Both ABC’s Nightline and CBS’s Sixty Minutes have aired excellent long-form stories on the atrocities, though neither show used the word genocide.

Downplaying The Slaughter: The six instances where the networks have used ‘genocide’ or equivalent terms, they’ve tended to lump Christians in with Yazidis and Shia Muslims as victims, echoing the Obama administration’s reluctance to focus on the anti-Christian violence. During the two years MRC Culture analyzed, one source has recorded 226 Muslim- on-Christian attacks. At least 125 churches have been attacked. According to one Christian group, 7,000 Christians worldwide were killed because of their faith in 2015 alone. Yet even when the Obama administration has (officially and unofficially) called the Christian persecution in Iraq and Syria genocide, the networks almost never used the word.

Christians in the Middle East, Africa and South Asia are suffering massive, sustained and very bloody persecution at the hands of Muslim extremists. ISIS has driven staggering numbers of Christians from their homes in Iraq and Syria, and have destroyed some of Christianity’s oldest holy sites in what the Islamists have termed ‘cultural cleansing.’ Terrorists have slaughtered entire Christian villages in Nigeria, and murdered Christian students in their classrooms in Kenya. Churches have been bombed and worshipers kidnapped in Pakistan and Syria.

One report from Christian activists identifies 1,131 individual Christians murdered by the Islamic State and names 125 churches the terrorists have attacked. Those numbers, according to the report, may be ‘the tip of the iceberg.’

ISIS has publically beheaded or burned alive Christians for refusing to renounce their faith and convert. In Syria, the group crucified dozens. ISIS broke up Christian and Yazidi families and sold young girls into sex slavery. It destroyed Christian holy sites in an attempt to erase all pre-Islamic history, and announced it will continue to wage war against “the Jews, the Christians, the pagans, and the apostates.”

A March 18, 2016 article in the Christian Science Monitor cited the evangelical Christian group Open Doors, which found that more than 7,000 ‘Christians were killed because of their faith last year, and that doesn’t necessarily include the numbers from Iraq, Syria, or even North Korea, where accurate data are difficult to obtain.’

All this adds up to one thing – genocide.

Yet the concept of ‘Never again!’ seems forgotten by network journalists. Groups such as Open Doors, the Knights of Columbus and In Defense of Christians have documented the horrors in countries from Afghanistan to Yemen, the West Bank to Central Africa. It hasn’t helped. The media rarely tied the incidents together. Even when the pope, the European Union, the House of Representatives and finally the Obama administration all agreed that Christians were victims of genocide, the term was almost unused on ABC, CBS and NBC.

The networks have reported on the violence sporadically and often superficially. They mentioned the plight of Christians in Muslim countries in only 60 stories between January 2014 and June 2016 – an average of just one story every two weeks across all three networks. But they have essentially refused to connect their own dots and call it what it clearly is: genocide.

Hollywood champions like George Clooney, who publicized Darfur and demanded action on that genocide have gone silent. Pope Francis has shined a light on the violence, going so far as to condone military action against ISIS. But the networks were far more interested in anything the pope might say on gay marriage or contraception than genocide.

If there’s any good news, it’s that, unlike Rwanda, where the horror was complete before the media understood genocide was occurring, the Christian genocide is occurring at a slower pace. There is still time for the networks to let the world know.

Connect With Christian Groups: Journalists need to do a better job working with Christian groups active in trying to prevent the genocide. Their efforts could better inform reporters and producers of what is really going on.

Don’t Wait to See Stars: The efforts of glamorous entertainers to publicize tragedy are noble and welcome, but news outlets should inform celebrities about human rights causes, not the other way around.

Go Regional: While networks don’t have the resources they used to, they can do a much more thorough job by simply paying attention to regional and international news outlets and wires. Their steady drip of small-scale atrocities can lend a sense of the breadth of the horror.

Tell the Truth: Finally, ABC, CBS and NBC should avoid taking their cues from the Obama administration, which has an interest in obscuring the nature and extent of Christian persecution by Muslims.”

SIGN THE PETITION: Demand the media “Cover the Genocide.”

As believers we are admonished in Heb.13:3 to “Remember those in prison and being mistreated, as if you were in prison with them and undergoing their torture yourselves.” [The Complete Jewish Bible (CJB)].

Please, pray for our brethren.