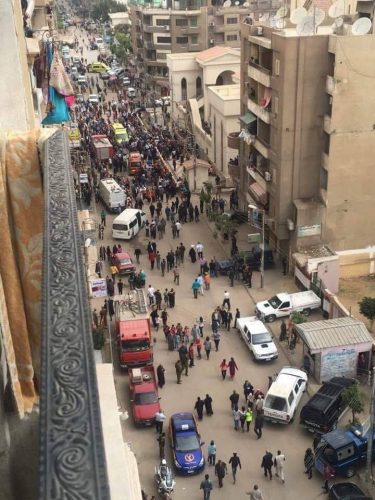 Palm Sunday. Christians gather around the world to remember and celebrate the sacrifice of Jesus as they prepare to honor His resurrection on Easter. On Palm Sunday, Christians celebrate the triumphal entry of Jesus Christ into Jerusalem, the week before his death and resurrection. For many Christian churches, Palm Sunday, often referred to as “Passion Sunday,” marks the beginning of Holy Week, which concludes on Easter Sunday.

They gathered today in Egypt to celebrate, worship, and to be murdered.

Two churches have been bombed filled with believers.

A bomb exploded in a church north of Cairo that was packed with Palm Sunday worshippers, killing at least 26 people and wounding 71 others, officials said.

The attack in the Nile Delta town of Tanta was the latest in a series of assaults on Egypt‘s Christian minority, which makes up around 10 per cent of the population and has been repeatedly targeted by Islamic extremists.

No one immediately claimed the attack. A bomb exploded in a church north of Cairo that was packed with Palm Sunday worshippers.

Egypt’s Health Ministry said a second blast at a church in Alexandria killed 6 and wounded 66.

The attack in the Nile Delta town of Tanta was the latest in a series of assaults on Egypt’s Christian minority, which makes up around 10 percent of the population and has been repeatedly targeted by Islamic extremists. It comes just weeks before Pope Francis is due to visit the Arab world’s most populous country.

CBC TV showed footage from inside the Mar Girgis church, where a large number of people gathered around what appeared to be lifeless, bloody bodies covered with papers.

According to tweets by Bishop Suriel:

#CopticChurchBombing, martyrs now number over 30 and my sources say bomb placed under bishop’s throne, near altar area, many deacons died.

A second bomb has exploded in front of St Mark Cathedral, Alexandria where Pope Tawadros was celebrating Palm Sunday! #prayforAlexandTanta

As Christians mark today as a day of remembrance, let us also remember those innocents who gathered unknowingly to meet their Savior face-to face.

When The Need For God Is Real