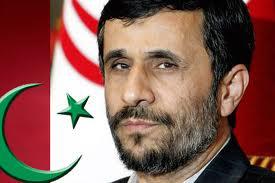 Former Iranian President Mahmoud Ahmadinejad said Saturday he does not view recent U.S. missile strikes on ally Syria as a message for Iran, which he called a “powerful country” that the U.S. cannot harm.

“The controversial former president made the remarks to The Associated Press on Saturday in his office in northern Tehran, three days after he stunned Iranians by registering to run for president again.

His surprise candidacy must still be approved by authorities but has already upended a race that was widely expected to be won by incumbent moderate Hassan Rouhani.

Ahmadinejad dismissed suggestions that the U.S. strike on Syria might also be a warning for his country.

“I do not think it has a message for Iran. Iran is a powerful country and people like Mr. Trump or the United States administration cannot hurt Iran,” he said.

U.S. President Donald Trump’s administration earlier this year announced it was putting Iran “on notice” in part over its ballistic missile tests, and last week pounded a Syrian air base with cruise missiles in response to a chemical weapons attack.”

Iran is the main regional backer of Syrian President Bashar Assad and is involved militarily on the ground in that country’s civil war.

The "Red Line" Has Been Definitely Set