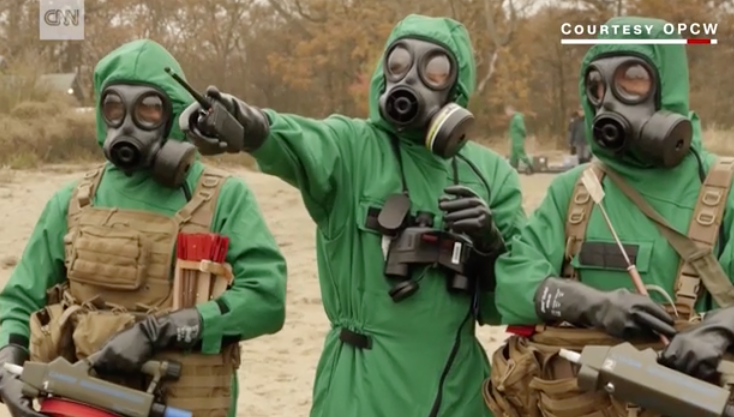 Despite repeated public pronouncements from President Obama, Susan Rice, and others in the Obama administration that a 2013 deal with Russia and Syria had “eliminated Syria’s declared chemical weapons program,” the evidence from continued attacks increasingly and overwhelmingly contradicts this assertion. As recently as Jan. 16, former national security advisor Susan Rice told NPR in an interview, “We were able to get the Syrian government to voluntarily and verifiably give up its chemical weapons stockpile.”

Rice’s statement is being roundly mocked in light of last week’s chemical attack in Idlib province. But a year-old report released by the Obama administration’s own State Department, which received little attention at the time, also undermines the claims regarding the success of the 2013 deal. The April 2016 report, titled “Compliance With the Convention on the Prohibition of the Development, Production, Stockpiling and Use of Chemical Weapons and on Their Destruction Condition 10(C) Report,” was not limited to Syria, but also covered Iran, Iraq, and Russia, which may explain why it was underreported. The report’s section on Syria specifically, however, is fairly devastating to the Obama administration’s case. The report states [emphasis added]:

The United States cannot certify that the Syrian Arab Republic is in compliance with its obligations under the CWC. The United States assesses that Syria has used chlorine as a chemical weapon systematically and repeatedly against the Syrian people every year since acceding to the Convention, and therefore is in violation of its obligations under Article I of the CWC. In addition, the United States assesses that Syria did not declare all the elements of its chemical weapons program, required by Article III of the CWC and that Syria may retain chemical weapons as defined by the CWC. The process for verifying the accuracy and completeness of the Syrian declaration and the resolution of these matters are ongoing.

The report went on to say:

In addition to assessed CW use and maintenance of a residual CW capability, Syria failed to meet most of its milestone destruction dates. … In spite of compelling evidence, which included CW barrel bombs being dropped from helicopters, a capability possessed only by Syria, Syria continued to deny regime use of CW…

In an attempt to preserve the Obama administration’s credibility on its claims regarding Syria’s surrender of its chemical weapons, some former administration officials are now acknowledging they “knew” Syria was not completely honest in the 2013 deal. Former deputy secretary of state Antony Blinken told the New York Times, “We always knew we had not gotten everything, that the Syrians had not been fully forthcoming in their declaration.”