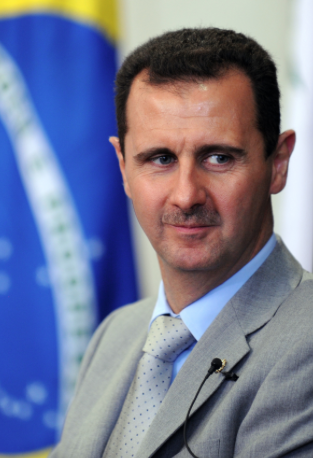 Here are reminders of the atrocities mounted during Assad’s reign over Syria, as chronicled in Thursday’s print version of USA Today:

In 2013, Assad’s military launched a nerve gas attack in the suburbs of Damascus that killed hundreds of people. Under international pressure, he agreed to plan to destroy his chemical weapons stockpiles. Since then his regime has been linked to attacks using chlorine, which is more easily made from industrial sources. Most countries ban the storage or use of chemical weapons. Nerve gas is suspected in this week’s attack.

Assad’s military has used these improvised explosive’s against rebels in cities where the distraction is indiscriminate. The bombs are packed with explosives and shrapnel that cause widespread damage and commonly dropped from helicopters. The Syrian Network for Human Rights said helicopters dropped nearly 13,000 barrel bombs in 2016, killing hundreds of civilians, including children.

The civil war broke out in March 2011 after teenagers were arrested and tortured for painting revolutionary graffiti. Human Rights Watch has reported many other incidents of torture by the regime. The United Nations report detailed inhumane conditions inside many of Syria’s prisons.

Syrian military forces have laid siege to rebel held cities, depriving residence of food, water and medicine – and bombing humanitarian aid convoys trying to reach the trapped Syrians. The result has been starvation and rampant disease, according to Amnesty International. Targeting civilians and indiscriminate bombings are work crimes under international law. “Most of the sieges are imposed and maintained by forces loyal to the government of President Bashar Assad,” Amnesty International reported.

The Civil War has forced the displacement of about 9 million Syrians, nearly half the countries prewar population, according to Amnesty International. Some remain inside the country, living in deplorable conditions because the distraction of homes and other buildings is so extensive.