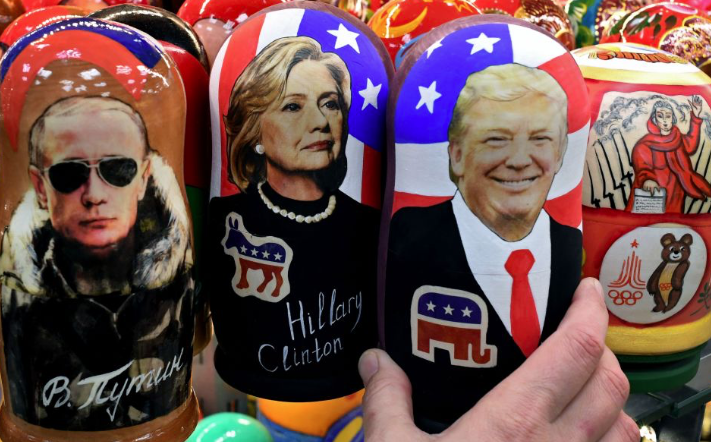 For months after the presidential election we continuously heard, “The Russians are coming! The Russians are coming!”  Yeah, yeah, sure. I grew up putting my head under my school desk preparing for their visit, but apparently they were already here, are still here, and will be here as long as we are. Is it cutting edge that the Russians were possibly hacking American politicians’ email for intel, aka spying? Those in the Democrat think tank should understand that espionage is not new and will never be controlled with a sanction. They must be relatives of the people down at the public school board who thought a school desk would keep us safe from a Russian bomb. Maxwell Smart, Agent 99, and James Bond are all working in real-time by way of software, and no sanction is going to prevent this from occurring. All of the hullabaloo over whether or not the Russians played interference in our 2016 Presidential election amounts to nothing more than smoke and mirrors.

The real story is that 100 after the presidential election, there continues to be a liberal panic that has Democrats–from the Beltway to Hollywood–in a massive melt-down.

It is interesting that prior to election night the obnoxious Clinton Crusade and Talking Heads from the Opposition Party (the media) were demanding that then-candidate Trump make some sort of public declaration that he would honor and respect the outcome of the election. You know, back when they believed it was a slam-dunk that Hillary was going to win.  To be fair, during the primaries even some misguided Republicans wanted the same type of guarantee that Mr. Donald J. Trump (who won state after state) would respect the eventual party nominee, because of course it was not going to be him. Talk about historical, folks.

The reason liberals are livid about the election results is because for fifty-plus years we have been subjected to the skewed ideology of the left and their vested interest of personal power and money. Before President Trump entered the political playing field, mainstream America was not aware of the relationship between The Opposition Party and the Democrats and how they control the news cycles with a daily spin on whatever relevant news there is. Yes, the real big story is not President Trump and Russia’s President Putin but instead the clear campaign from within our own country that is determined to see Trump resign or be impeached.

One must understand the fact that liberals do not function like normal upstanding citizens, and politically speaking they absolutely refuse to lose. D.C. Democrats do not go home, tuck their tail, and figure out what they did wrong and fix it when they lose; they do anything but. With the first election of President George W. Bush in 2000, no matter how many times they counted and recounted the Florida votes, he still won. But Liberals did not like that answer so they spent the next four years trying to marginalize his work by deeming him illegitimate. They made fun of him for being a “stupid rich boy” and undermined him the next four years. But their spiteful and avenging ways failed in their efforts, instead helping him easily get re-elected four years later. No hanging chads there.

But now…the Left’s fury is deep and wide as the Curtain of Oz as been pulled back in American politics. Their vengeance is unmatched because Hillary Clinton felt denied a second time around and because the people–the real people who live, work, and play here in America–said NO. And along with saying NO to Hillary they also said NO to President Obama (despite his self-written glowing exit interview).

Only time will relieve the suspense of how any President’s years as Commander in Chief will shake out, but so far President Trump is handling the pressure better than any I have seen and is proving his excellent decision-making skills in real time. He is accomplishing much even amidst the never before seen hostility of the losers and the unmatched harboring of ill will by members of the President’s own party, the very people who are supposed to have his back.

Democrats love to slander our President, referring to him as an unprecedented liar who cahooted with the Russians to steal the election from Hillary Clinton and therefore he is unfit for office. The reality is that President Donald J. Trump beat the pantsuit off of Ms. Clinton, all the while giving Obama’s eight years a “huge” thumbs down. This has unleashed a liberal hogwash storm that is unprecedented.

As election night rolled around the Clinton group had no need for a Plan B because they were going to win. Period. Well folks, they learned a good lesson in not counting your chickens before they hatch as the fire works came to a screaming halt and John Podesta conceded defeat for the good Senator. And then…all hell broke out, starting with the Women’s march on Washington.

Have you seen the likes of the left Liberal woman? In January, just mere hours after Mr. Donald J. Trump took the oath of office, about 500 thousand of them swarmed DC to pollute the streets. And I do mean pollute. Their message was not clear other than they needed an excuse to wear their genitalia hats. (Who makes fun of their own intimate anatomy? Feminists do.) This sordid group of Americans pranced around our nation’s capital bellowing some nonsense about protecting their reproductive rights and protesting President Trump. The message on their shirts was “F**Y YOU” and they carried card board signs with more profound and wise political enlightenment, like “F**K YOU, YOU F**K F**KER!” They brought the best of their Hollywood Sister Act along so anyone in the world that tuned in was treated to Madonna screaming at the top of her lungs, “And to our detractors that insist that this march will never add up to anything, f**k you! F**k you!” This was after she told us she had been thinking “about blowing up the White House” and rearranged the lyrics of a song to sing more classiness, like “Donald Trump go suck a d**k!” To use one of Senator Elizabeth Warrens favorite words, what a lewd bunch of people who ruined the Nations Reflecting Pond forever more…

With the mess of garbage left behind by these women two things were painfully obvious. First, there was not one lady in attendance. And second, what a disrespectful group of human beings. No respect for women or they would not be making fun of their own sexuality, and no respect for the city of Washington DC and it’s residents. Of course it is no wonder they have no respect for life in the womb.

Next the Soros-funded protestors took their paid histrionics to the streets of our own cities and towns. Looney toone Liberals came out in droves to destroy public property, waste money, and make fools of themselves in front of the world. The amount of Federal and State money, time, and anguish their spiteful and violent behavior cost can never be measured but they have much to be ashamed of. And all of this simply because their favorite presidential candidate did not win.

So it was the sore Leftist losers, and not the Russians, who spilled over into town hall meetings where disgruntled Hillary people shouted down their representatives. These so-called concerned constituents were not there to ask questions and or voice concern, they were there simply to call names and stomp their feet.

100 days after the election, as the sun slowly sinks behind the horizon in Trump’s America and the fake news media continues the tired onslaught of the the Russians the Russians the Russians, I can easily say I am much more frightened of furious Americans with a D on their voter registration cards than any Russian. I have a very good friend from Estonia and the scariest thing she does is eat sour cream with everything.   But an unhinged Nancy Pelosi, a seething and hissing Elizabeth Warren, a screeching and bug-eyed Hillary Clinton, a profane and threatening Madonna, a mean spirited and abhorrent Rosie O’Donnel, are far scarier than any Russian I could come up with, even in my wildest imagination.

Daniel Greenfield: The One Lesson of the Holocaust