Grassroots activist Amy Hedtke—an alternate delegate to the RNC’s presidential nominating convention—was arrested after refusing to stop recording a public meeting at the Texas Capitol—even though it was within her rights to do so. Texas state law (Subchapter B, Section 551.023) permits recording of a public meeting by a person in attendance. However, Chairman Byron Cook, a Republican, adopted rules in violation of state statute, allowing only credentialed media to record the meeting. Hedke was attending a committee meeting in which a partial birth abortion bill would be heard.

Cook, who claims to be pro-life, has been referred to as a bully by the Texas Right To Life PAC. During a previous session concerning a partial abortion bill, Cook wrote a public letter in support of partial birth abortion for babies with developmental disabilities.

A number of pro life activists, including Hedtke, attended to demand a hearing on House Bill 948 to abolish abortion—which Cook has denied a spot on the committee docket. Following Hedtke’s arrest while she was being processed in jail, Chairman Cook called on her to testify. 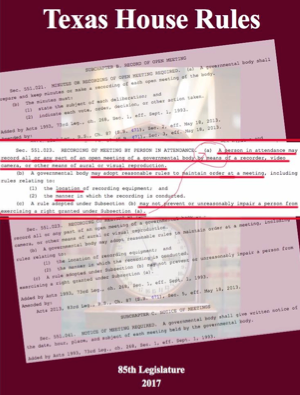 Despite one sign outside the committee room and an additional three inside the room, Hedtke decided to Facebook Live the meeting anyway. Prior to the meeting, she was told that House rules trump state law. Hedtke disagreed and read the state law on her Facebook Live feed explaining that state law only allows “reasonable restrictions” that may not impair a person the right granted to record the meeting. Examples of reasonable restrictions given by Hedtke include not shoving a camera in a person’s face and that a camera can’t be set up blocking traffic flow.

“A person in attendance may record all or any part of an open meeting of a governmental body by means of a recorder, video camera, or other means of aural or visual reproduction.”

When the Texas Department of Safety (DPS) officers told Hedtke to leave the public committee meeting for recording without the chair’s permission, Hedtke informed them that according to state law, she had a right to record the meeting. DPS responded that she still had to leave for refusing to comply with the chairman’s recording ban. A female officer told Hedtke, “the chairman has the right to make that decision,” referring to the recording ban for uncredentialed media. 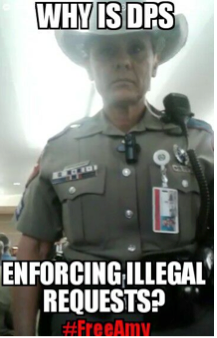 Video capturing the event showed DPS officers dragging Hedtke out of the room and ordering her to leave the Capitol. Hedtke refused to leave the Capitol, citing that her rights were being violated and that they were enforcing an illegal rule. DPS told her that she would be charged with criminal trespassing.

Hedtke asserted to DPS that her arrest was unlawful because they were following an unlawful or order by the chairman in violation of state law. Upon refusal to stand up and walk to the transport vehicle on her own, DPS told her that she was going to face a charge of resisting arrest. “If you are going to arrest me, you are going to have to do that yourself,” Hedtke responded. “I’m not going to resist you, but I’m not going to help you.”

As DPS processed her in jail, Hedtke continued to “not resist” by refusing to put on prison garb. She described how DPS pulled off her dress and left her naked in a room with a window where others could see her in full view. She said they eventually taped the window with brown paper bags and later came back in the room to dress her for a mug shot.

Following her mug shot, Hedtke was taken into a padded room where she was stripped down again and left with a mattress and a blanket.

The magistrate dropped the resisting arrest charge for lack of evidence, but maintained the trespassing charge.

https://www.facebook.com/supermantrackcoach/videos/10212237592165947/?pnref=story.unseen-section (Video of Hedtke being dragged out of committee meeting)

HILARIOUS Twitter Posts on @CrackerBarrel After "Brad's Wife" is Fired