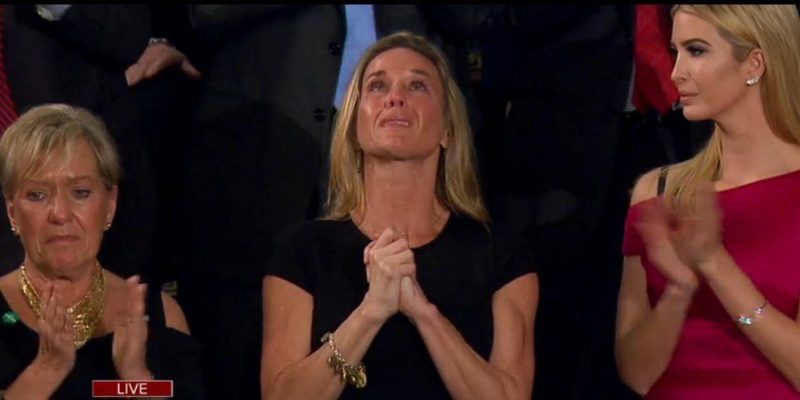 On Tuesday night, President Trump spoke to a joint session of Congress – and gave his best speech yet.

He opened his address by condemning the recent threats targeting Jewish centers and the vandalism of Jewish cemeteries as well as last week’s shooting in Kansas City.

“While we may be a nation divided on policies, we are a country that stands united in condemning hate and evil in all of its very ugly forms.”

President Trump spoke about “radical Islamic terrorism,” his trillion dollar infrastructure plan, the military, and about repealing and replacing Obamacare. He spoke of his tax reform and deregulation plans, job creation, and bringing more jobs back to the United States. He spoke on “school choice,” his support for female entrepreneurs, and even about “cures to illnesses.”

He also mentioned his possible new approach to immigration — suggesting that the nation adopt a “merit-based” immigration system.

The best moment though, was his tribute to the widow of Navy SEAL William ‘Ryan’ Owens. Owens died in a January raid in Yemen that secured a trove of intelligence that will help in the fight against ISIS.

“We are blessed to be joined tonight by Carryn Owens, the widow of a U.S. Navy special operator, Senior Chief William “Ryan” Owens. Ryan died as he lived: a warrior, and a hero — battling against terrorism and securing our nation. I just spoke to General [Jim] Mattis, who reconfirmed that, and I quote, “Ryan was a part of a highly successful raid that generated large amounts of vital intelligence that will lead to many more victories in the future against our enemies.” Ryan’s legacy is etched into eternity. For as the Bible teaches us, there is no greater act of love than to lay down one’s life for one’s friends. Ryan laid down his life for his friends, for his country and for our freedom — we will never forget him.”

As Owens’ widow wept, looked up and whispered, “I love you, baby,” Trump led a thunderous applause that he suggested, “broke a record.”

Kellyanne Keeping It Classy At the Oval Office