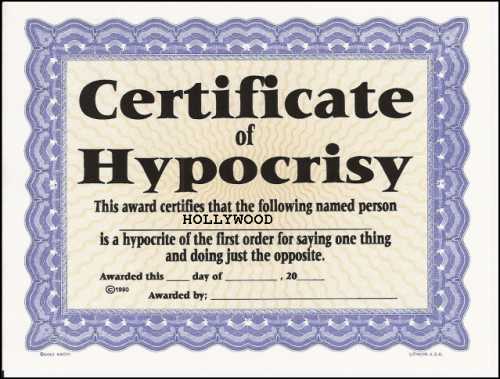 According to Shakespeare’s Hamlet, when someone is insisting too much about something, the opposite of what he or she is saying must be true.  Enter the Hollywood hypocrites.

Before I begin I need to disclose that I did not watch the Academy Awards on Sunday night.  I couldn’t bring myself to watch almost four hours of non-stop Trump bashing, misinformation and hypocrisy so I just got the Cliff notes from my favorite internet sites the next morning.  Believe me, I have been to the Oscars on many occasions and I finally stopped going sometime in the late 1990’s.  Been there, done that.

From the film clips and screaming headlines it looked to me like the whole show was pretty much what was expected with the one caveat of the wrong best picture being announced by Warren Beatty and Faye Dunaway.  That is something (gasp!) that just doesn’t happen….kind of like Hillary losing the presidential election.  Oh well, I guess Hollywood isn’t so perfect after all.

As I perused the film clips of Jimmy Kimmel trying to be funny while taking every opportunity to offend half of this country, I thought, why are these people not just enjoying their time in the spotlight, thanking and showing gratitude to the voters who gave them this honor?  No, from what I saw, many of them took their moment to preach, criticize and alienate many in their fan base.  They obviously just can’t get over the fact that they are powerless and impotent when it comes to changing the hearts and minds of a majority of this country and they continue to get louder and louder hoping someone will listen.

It is pretty funny actually.  Most of these people would never even consider practicing what they preach.  For instance, many of them scream about “building walls” yet they live behind concrete barriers or iron gates situated in front of their homes, trained guard dogs in their yards and security cameras monitoring every inch of their property.  A few years ago, a famous movie mogul sued the Malibu Costal Commission so that he could keep a wall that would stop anyone from using the public beach near his property. No walls for our borders to keep out drugs and criminals, but ok for him to have one to keep out beachgoers right?  They “hate” guns and want the second amendment banned yet in every one of their movies they are blowing people away and they won’t go anywhere without their armed bodyguards.  They send their children off to “private schools” protected by security services that will deter any crazy who might attempt to enter the premises yet they scream about teachers in public schools being armed.  Once again, hypocrisy.

I saw another film clip of Iranian director Askar Farhadi who won his second Oscar for Best Foreign Film.  He made his statement by boycotting the awards yet taking the time to bash President Trump for “being inhumane and banning Muslims from seven countries.”  He received a standing ovation for that flat out lie.  I have to shake my head when I look at these reports because the image of the entire theater standing on their feet cheering a man from a country that would delight in killing, beheading or stoning every one of the people there is mind-boggling.  Where is their outrage over the treatment of women in Iran?  Where is the sympathy for the LGBT members of the Iranian population?  Not a word, not one word of protest against the government of Iran and their support of terrorism.  How can they possibly be so stupid?  They take more delight in demonizing and ridiculing President Trump and his voters than they ever would murderous regimes who slaughter their own citizens.  Go figure.

The women of Hollywood are extremely hypocritical when it comes to “women’s rights and treatment”.  Really?  What about ageism, sexism and income inequality with Hollywood?  It is rampant.  Always has been, always will be.  Sex sells and the more beautiful and sexy and young you are, the easier the road for you.  Don’t let them kid you, the casting couch is alive and well for both men and women, it is just hidden better these days.  And the income inequality?  Actresses have always known that it would be a nasty cage fight to try and be equal to the men in films.  There are very few “A” list actresses that can command a higher or equal salary to their male co-stars.  The list is short for women.  It is also very short for women directors, and cinematographers.  A handful maybe?  So, come on Hollywood, tell the truth;  women are better off in the real world than they are in Hollywood.  Less discrimination and more protection under Donald Trump.

The real hypocrisy this year was the whole “racism” issue.  Last year, Black Lives Matter and the vocal activists made a huge stink about the “all white Oscars”.  They lobbied the Academy, shaming them with news articles about how African-Americans were being unfairly overlooked at the Academy Awards.  Really?  I thought the whole idea was about talent and performance, not race.  Well, lo and behold, the Academy made an announcement that they were going to be more “diverse” in their voting and more “inclusive” with their membership.  Whether qualified or not, they were going to stack the deck with whomever was politically correct.  It didn’t matter to them that realistically the African-American community was well represented when it came to the numbers.  I didn’t see any lobbying by the Latino, Asian, or LGBT community did you?  And of course, this past Sunday night, it would have been a disaster if (gasp!) La La Land would have made a sweep and taken all of the awards.  It had to be more diverse.  I’m sure they were praying that everything would come out equally and everyone would go home happy.  With “Moonlight” winning best picture, they got a double whammy:  “A young black man deals with his dysfunctional home life and while coming of age in Miami during the “War on Drugs” era, deals with bullying. The story of his struggle to find himself is told across three defining chapters in his life as he experiences the ecstasy, pain, and beauty of falling in love while grappling with his own sexuality.”  Bingo!  Maybe the film was brilliant and deserved the Oscar, I don’t know and neither does anyone else because no one saw it.

The bottom line is that Hollywood just doesn’t get it.  They wonder why this years Academy Awards was among the lowest rated ever, they wonder why people are turning off television and not going to the movies?  They wonder why they have to rely on international box office more than domestic?  Because no one cares anymore.  No one cares what these people think or say and the louder they get the more alienated they become.

I never spoke a word about my conservative values until I was long gone from Hollywood because I had more respect for my audience than to shove it down their throats.

Pres. Trump Cutting Bureaucracy: "In government, we have too many people."