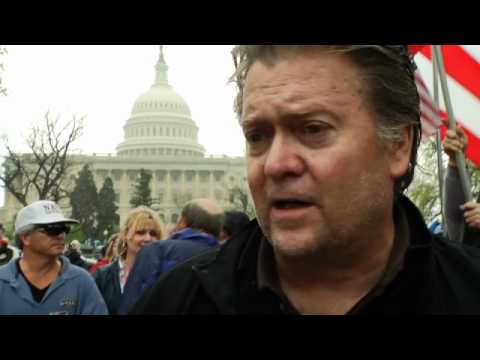 As a Jewish American who worked with Bannon at Breitbart News, I am certain these characterizations are false. They are the leading edge of a distortion campaign that mislabels Bannon as virulently prejudiced, anti-immigrant and a cultural fascist.

In the six years I have known Bannon, I have never heard him make a single racist or anti-Semitic comment.

Since the election, the far left has engaged in a vicious crusade against Bannon in an effort to discredit President Trump. Banners adorn Manhattan buildings, demanding that Congress “Impeach Bannon.” The Chicago Tribune recently opined the president should banish his advisor.

First, in a decade-old divorce filing, Bannon’s former wife reportedly said he did not want his daughters attending a particular private school because too many Jewish children were students there. Bannon purportedly called them “whiny brats.” The emphasis here should be on “reportedly” — this has not been proven.

Next, under Bannon’s leadership of Breitbart, white nationalists infiltrated the comments section on the website, promoting a separatist, racist agenda. Yet it’s common knowledge that virulent trolls are endemic in online comment sections, a problem most sites face without their leadership being accused of sharing those views.

Finally, in one 2016 interview, Bannon described Breitbart as “the platform for the alt-right.” “Alt-right” lacks a single, simple definition, but the media have increasingly associated the term with white nationalism. In November, Bannon specifically clarified his views in the Wall Street Journal: He has “zero tolerance” for “racist or anti-Semitic views.”

I do not share all of Bannon’s political views and while working with him, I openly expressed my differences with the aggressive editorializing at the website after its founder, Andrew Breitbart, died in 2012 and Bannon took over. As the company reorganized, some of the journalists who worked there left; I was the first to go.

But my departure had nothing to do with personal objections to Bannon or his values. Other Breitbart editors believed I was too centrist, and so I was. Still, after I left and applied to the Washington Times, where I worked as a legal analyst and investigative reporter, Bannon provided me — a Jewish journalist — with a positive recommendation.

I would say that Bannon’s vision is best characterized as an “egalitarian America First” policy, with the stress on the word “egalitarian.”

The phrase America First surfaced before the United States entered World War II, when Charles Lindbergh and others challenged President Franklin D. Roosevelt’s call to stop the Nazis. The America Firsters insisted that Jewish groups and the British were manipulating the U.S. to fight their war against Germany.

Lindbergh was undoubtedly anti-Semitic and isolationist, as his journal entries reveal. Bannon isn’t. Unlike Lindbergh, he does not believe in ignoring human rights violations. On the contrary, he (and the president) have said defeating Islamic State is a priority precisely because of the terrible violations it commits. That is not isolationism.

Bannon and Trump, along with many others, want to reform the immigration system to protect all Americans — regardless of race, religion, ethnicity, national origin or sexual orientation — from crime, terrorism and unemployment.

The controversial White House travel ban, which is now being revised, temporarily barred entry of citizens from countries that present safety issues, specifically so the U.S. could develop a better background check system to prevent Islamic State from gaining entry to the country. It was never meant to be a blanket, permanent ban.

None of this is about hatred of foreigners. It is about taking care of your own. There is a difference.