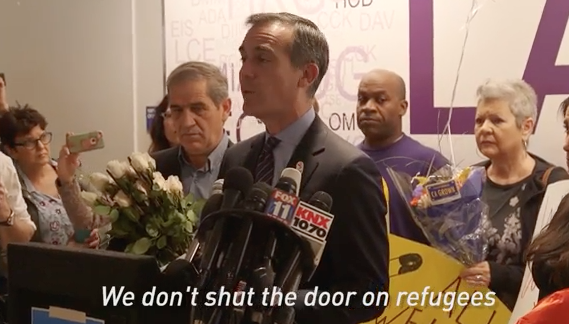 Los Angeles mayor Eric Garcetti is ready to fight the Trump administration in order to allow “safe spaces” for people who come to America illegally.

Responding to the latest warnings by U.S. Attorney General Jeff Sessions that Department of Justice funds will be withheld from sanctuary cities, Mayor Eric Garcetti said Monday he will fight efforts by the Trump administration to take away federal funding needed for law enforcement in Los Angeles.

Garcetti said that such actions would be unconstitutional, adding that the city’s policies are “designed to keep our residents safe.”

“Slashing funds for first-responders, for our port and airport, for counterterrorism, crime-fighting and community-building serves no one — not this city, not the federal government, not the American people,” he said. “We will fight to protect the safety and dignity of all Angelenos, and we will work closely with our representatives in Congress to make sure that Los Angeles does not go without federal resources that help protect millions of people every day.”

Among the Justice Department grants received by the city of Los Angeles in recent years include $1.8 million from the Edward Byrne Memorial Justice Assistance Grant Program, which goes to the city’s initiative for reducing criminal gang activity.

The city also was awarded $1 million last year from the Justice Department to be put toward a $69 million program to equip all police officers in the field with body cameras.

It was not immediately clear how much funding could be at risk if Los Angeles were deemed a sanctuary city.

Sessions said local jurisdictions seeking U.S. Department of Justice grants must first demonstrate they are not sanctuary cities, by proving they are in compliance with Section 1373 of U.S. Code Title 8, which requires notification of federal officials about the immigration status of people in local custody. The policy was issued under the Barack Obama administration in 2016.

“I urge the nation’s states and cities to carefully consider the harm they are doing to their citizens by refusing to enforce our immigration laws,” Sessions said in statements from the White House briefing room.

Trump said during the campaign that he would “defund” sanctuary cities by taking away their federal funding. But legal precedent suggests that would be difficult.

Sessions’ warning comes on the heels of a Trump administration report on local jails, listing more than 200 cases across the country in which immigrants were released from custody before federal agents could intervene.

Los Angeles-area jails, including one in Van Nuys, made the federal government’s list.

Garcetti does not refer to Los Angeles as a “sanctuary city” and said in January that it is a “myth that we don’t collaborate or cooperate with federal officials.”

Los Angeles operates under Special Order 40, which prohibits police officers from approaching individuals to ask about immigration status or arresting people for immigration-related violations. But the policy also requires police officials to inform federal immigration officials of any “undocumented alien” who is arrested for multiple misdemeanor violations, high-level misdemeanor or felony offense violations or for a repeat offense.

At the county level, the L.A. County Sheriff’s Department responds to requests from federal immigration agents to be notified when its jails are housing inmates who might be subject to deportation.

Sheriff Jim McDonnell said the department’s current practice is to release inmates being investigated by the U.S. Department of Homeland Security Immigration and Customs Enforcement directly into the custody of their agents.

Garcetti said in January that he feels the city of L.A. has a strong legal case for keeping its federal funding, saying that the city is protected by the 10th Amendment, which lays out states’ rights.

Jamie Glazov: How Not to Blame Islam for the Jihad in London