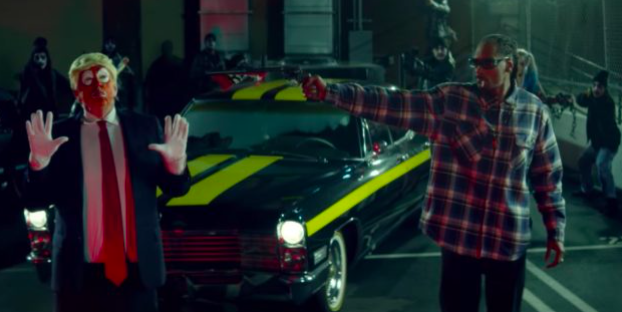 Remember in 2011 when the left went insane because Sarah Palin used a political map dotted with crosshairs, then she was blamed for shooting of congresswoman Gabrielle Giffords?  Turned out that in addition to the shooter being a certified nutjob, he was also a major lefty.  But that doesn’t matter because, SARAH PALIN…

Flash forward to 2017 and the very dangerous, very real threats directed at President Trump.  Hollywood has gone from being pudding-headed idiots blathering imbecilic political rhetoric to actually encouraging and inciting violence. First Madonna talked about ‘blowing up the White House‘ and now rapper Snoop Dogg has created a video in which he kidnaps, at gunpoint,  “President Ronald Klump”, a clown made up to look like Trump.  (Read Wayne Dupree’s article here.)

And there have been others, see here and here.

The media has been adding flames to the fires as well (see here).

Are they hoping someone will step up and become their leftist “hero”?

This needs to end and all of us at PolitiChicks encourage you to report any threats or hints of violence to the FBI.

Good Question: "Why is Obama's IRS Commissioner Still on the Job?"

Back in the Closet: Conservatives "Face Backlash" in Hollywood Under the Trump Administration