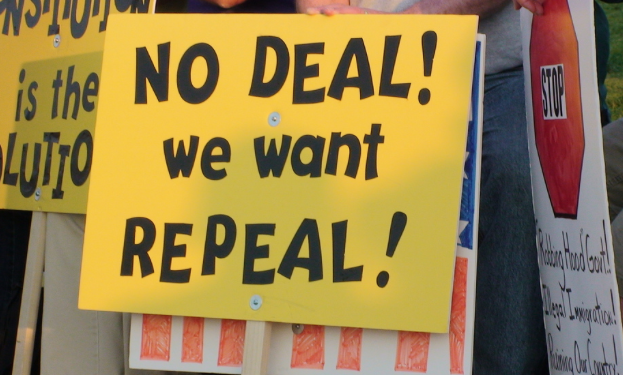 Conservatives hoping for a full repeal of the Affordable Care Act were very disappointed after reading the newly released Obamacare legislation, already being referred to as “Obamacare Lite”.

House Republicans on Monday released long-anticipated legislation to supplant the Affordable Care Act with a more conservative vision for the nation’s health-care system, replacing federal insurance subsidies with a new form of individual tax credits and grants to help states shape their own policies.

Under two bills drafted by separate House committees, the government would no longer penalize Americans for failing to have health insurance but would try to encourage people to maintain coverage by allowing insurers to impose a surcharge of 30 percent for those who have a gap between health plans.

The legislation would preserve two of the most popular features of the 2010 health-care law, letting young adults stay on their parents’ health plans until age 26 and forbidding insurers to deny coverage or charge more to people with preexisting medical problems. It would also target Planned Parenthood, rendering the women’s health organization ineligible for Medicaid reimbursements or federal family planning grants — a key priority for antiabortion groups.

The debate, starting in House committees this week, is a remarkable moment in government health-care policymaking. The Affordable Care Act, former president Barack Obama’s signature domestic policy achievement passed in 2010 with only Democratic support, ushered in the most significant expansion of insurance coverage since the creation of Medicare and Medicaid as part of President Lyndon B. Johnson’s Great Society programs of the mid-1960s.

There is no precedent for Congress to reverse a major program of social benefits once it has taken effect and reached millions of Americans.

Taken together, the bills introduced Monday night represent the Republicans’ first attempt — and best shot to date, with an ally in the White House — to translate seven years of talking points about demolishing the ACA into action.

At the same time, major aspects of the plans, notably the strategy for tax credits and Medicaid, reflect the treacherous terrain that Republicans face to win enough votes within their own conferences in the GOP-controlled House and Senate.

The bills must address concerns of both conservatives worried about the cost of the overhaul and worries that it might in effect enshrine a new federal entitlement, as well as more moderate members who want to ensure that their constituents retain access to affordable health care, including those who received Medicaid coverage under the ACA.

Even so, signs emerged on Monday that Republicans in Congress’s upper chamber could balk either at the cost of the proposal or if it leaves swaths of the country without insurance coverage.

Sen. Rand Paul (R-Ky.), one of at least three conservative senators who opposes the plan to provide income-based tax credits, tweeted: “Still have not seen an official version of the House Obamacare replacement bill, but from media reports this sure looks like Obamacare Lite!”

And four key Republican senators, all from states that opted to expand Medicaid under the ACA, said they would oppose any new plan that would leave millions of Americans uninsured.

“We will not support a plan that does not include stability for Medicaid expansion populations or flexibility for states,” Sens. Rob Portman (Ohio), Shelley Moore Capito (W.Va.), Cory Gardner (Colo.) and Lisa Murkowski (Alaska) wrote in a letter to Senate Majority Leader Mitch McConnell (R-Ky.).

House Minority Leader Nancy Pelosi (D-Calif.) said, “The American people deserve to see what Republicans are trying to do to their health care.”

A Day Without a Woman: Have Women's Identities Been Hijacked by Leftists?