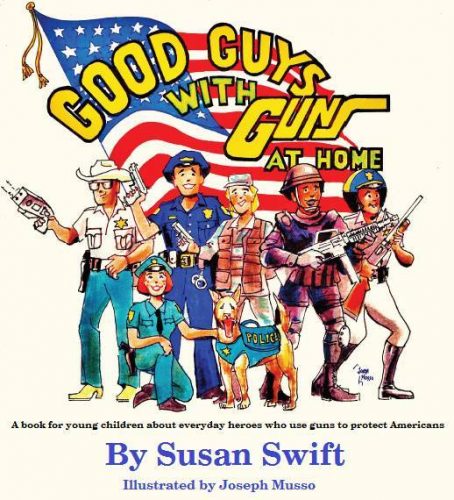 One of PolitiChicks’ very own California contributors, Susan Swift, has recently written a children’s book called “Good Guys With Guns At Home,” which is about everyday heroes who use guns to protect our communities.

Susan Swift is an actor, lawyer, and a mother of seven children. When she is not cooking, doing laundry or helping with the kids’ homework, she writes on Conservative topics concerning women and family. Susan loves the Constitution and reveres the everyday heroes who protect the American way of life. Today, this proud Texan lives in California with her husband, the kids who aren’t off to college yet, and Orestes the cat.

PC: A portion of your profits will be donated to promote safe and responsible gun ownership. What group/organization are you planning on giving portions to?

Susan Swift: To the NRA Foundation

PC: What inspired you to write the book?

Susan Swift:  At my children’s preschool during a Christmas celebration to which parents were invited, a father who was a police officer came in uniform wearing his sidearm (he was just off duty arriving a bit late to the event). A liberal mom demanded that he leave because he had a gun and guns should not be in school. He was POLICE OFFICER IN UNIFORM, the best thing you could ever hope to be at your child’s school in the event of any problem. Despite multiple reassurances from the police officer’s wife and the preschool teacher that this officer was a father and there to attend the school event to be with his child, the liberal mom insisted that the police officer leave, creating a scene. He eventually did, not wanting to contribute to the negative mood the liberal mom was creating. The liberal mom didn’t stop there, contacting the officer’s captain and demanding that he not be allowed to come onto the school property to pick up his child. The police officer and his wife eventually pulled their children from the school. I suggested to the preschool teacher who was extremely upset over the incident to have some fun with this, suggesting she decorate her classroom in a military theme, have kids coloring pictures of guns, even replace some of the classroom books with children’s pro-gun books. That when we discovered there were no pro-gun children’s books and the idea for Good Guys With Guns was born!

PC: How does a book like yours promote safe and responsible gun ownership?

Susan Swift: By introducing children to the law enforcement officials who uphold and defend our laws, thereby teaching children respect for the law and legal use of firearms.

PC: What do you want parents and children to take away from the book? 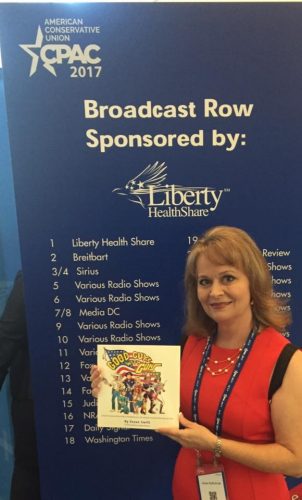 Susan Swift: I want parents to teach their children that law enforcement professionals are their friends. The book teaches respect for the regular everyday heroes in law enforcement who put their lives on the line everyday to serve and protect the public. The book introduces children to the friendly characters of law enforcement who populate our cities and counties and the gun they use to keep us safe. They are regular Americans, fathers and mothers with families. Guns are part of their everyday work. This counteracts the liberal attempt to dehumanize law enforcement through organizations such as Black Lives Matter. The book sends a positive message about how law enforcement uses guns to keep all American citizens safe.

PC: Any other insight about the book?

Susan Swift: The book is designed with very young children in mind. Simple text, whimsical illustration style that are a reminiscent of the 1950’s. The illustrator, Joseph Musso, just received the Art Director Guild’s Lifetime Achievement Award for 2017. The interactive “Match Me With My Hero” section involves children to recall which items went with which character in earlier pages.

PC: Where can our readers get a copy of the book?

Susan Swift: At Amazon or via my website: www.susanswift.net