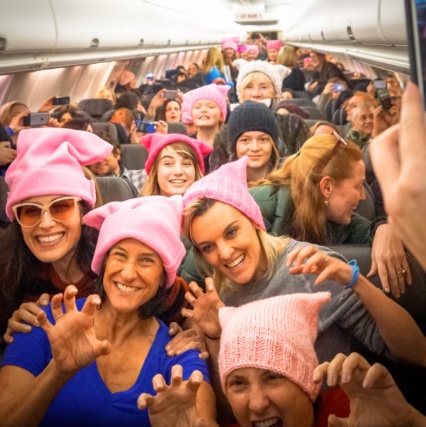 Once upon a time, there lived a family. The family believed all was well in their world. They had established their family based on their chosen values and decisions, equally made by both parents. Through much conversation, budgeting and even prayer, the mom of the family chose, of her freewill, to stay home and be a help to the family, from their quiet house. One bright, beautiful March morning, the mom announced, “Today is ‘A Day Without a Woman’ and I am out of here!” She continued, “I don’t feel I am appreciated, loved or respected. I have felt like this since I was a teenager, way before I ever got married and had kids. I have seen millions of women decide to walk out of their offices, schools and businesses to protest equality and the rights of women. I’m going too! Today you all can fix your own food, take yourselves to school, find someone else to help you with your homework and tell all your problems/hurts from the day. I want you to know what it feels like to not have me around!” With much confusion, and some hurt, the family picked up the pieces, as the woman strutted out the door, in her red outfit. They spent their day, without the one woman they needed most in their life.

This, of course, is not the majority of women who will be, yet again, protesting around the country for “A Day Without a Woman”, but it could be someone’s reality. Which is so sad. Women today are so confused by what they are “supposed” to be in America. Women’s identities have been hijacked by Hollywood and actresses who haven’t cooked for themselves in years, who have nanny’s doing everything other women would normally do, all for the opportunity to yell at the top their lungs they are “nasty” . Other women have taken to shaming tactics, trying to convince the female population that all men are against them. Men steal women’s opportunities, with the intent to oppress and degrade.

“The U.S. has the highest proportion of women in senior management positions (43 percent) of any country in the Organization for Economic Cooperation and Development (women comprise 47 percent of the U.S. labor force); the U.S. was ranked eighth globally in gender equality by the World Economic Forum; 24 percent of working American women are in professional fields (compared to only 16 percent of working  American men); 46 percent of American firms are owned or co-owned by women.”

Contrary to popular belief, and screaming actresses, women in America are doing well. Yet no one cares to scream these statistics from the roof tops. Maybe that is because women who are living life with a different focus, are happier. Women who don’t allow others to dictate what their life should be are moving forward. While women who constantly scream about equality, never seem happy. When caught on news cameras, they are angry, unsatisfied and have a strong affinity for blaming others, for their current circumstances. Isn’t it a common behavior for all of people, to blame someone else, when they are not happy?

Concern should probably not be for the current working generation, but for the next generation. Protestors constantly draw in high school and college age young women, making them believe that leaving their jobs for a day will create enough momentum to cause business owners to sit up and listen. Declaring colleges will bend under the pressure, if enough women picket and march through campuses. When in reality, most people will turn away. Those who will cave, as with some school districts who are cancelling classes because of “A Day Without a Woman” march, do so primarily out of necessity. No real resolution ever comes from thousands of women running around with weird hats and signs.

For all generations, real resolution comes when calm and productive women, gather around tables and professionally present their ideas and needs. Presenting both sides of the situation. Showing positive statistics, such as those presented by Concerned Women of America, as well as the not as “pretty” statistics of women in business and education. No spin. No influence by groups, such as Planned Parenthood and MoveOn.org, (two of the sponsors for this recent event) who only want to push their agenda and don’t want real understanding of statistics and proven information.

Resolution also comes through abolishing Unions. Teachers in Philadelphia plan on using “A Day Without a Woman” to protest stalled contract negotiations. The Philadelphia Federation of Teachers, a Union, is part of these teacher’s problems. Stop paying to have someone else fight for teachers. Allow teachers to negotiate their own contracts. No one will ever gain the appreciation and compensation they deserve, when someone else is always negotiating to maintain the teacher’s dependence upon a Union.

The same holds true for rallies such as “A Day Without a Woman”. If enough people continue to take days off for protests, jobs will be lost. If everyone were to be honest, the local grocery store won’t miss a few women not shopping for a day, in protest of equality. When a family needs to eat or diapers need to be purchased, a woman will always take care of her family first, even if it means she goes against the crowd. Maybe some statement will be seen, if multitudes of women wear red, as requested by organizers. In truth though, some may think its “Go Red for Women Day”, in conjunction with the American Heart Association. A very worthy cause.

Ladies, everyone wants to be appreciated, whether it’s at a job or at home. There is no sin in that desire. However, maybe protests are wrong way to share the message. Stop wearing stupid hats and screaming profanities at the top of everyone’s lungs and get down to sitting across the table with those who can make a difference. If two children want something, whose request is honored? The spoiled brat who yells until they get what they want, or the child who sits respectfully and presents their case with dignity and intelligence? The answer is very easy.

Which “child” should American women be in the scenario called, “A Day Without a Woman”?