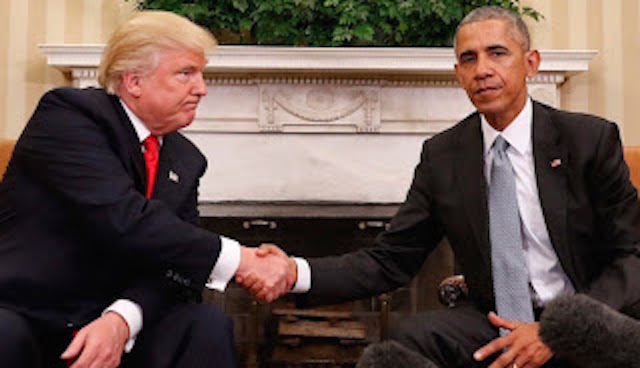 Obama is a coward.

Trump will call someone a name while Obama will anonymously source a smear through three levels of staffers, political allies and reporters. Trump called CNN “Fake News” on camera. Obama sourced Operation Rushbo, targeting Rush Limbaugh, through a variety of White House people and left-wing allies. Trump will boot reporters he doesn’t like. Obama authorized secretly hacking the emails of a FOX News reporter. Trump had an openly hostile conversation with the Prime Minister of Australia. When Obama wanted to call Netanyahu “chickens__t”, he did it by having one of his people anonymously plant it with a reliable media sycophant, The Atlantic’s Jeffrey Goldberg, before later having a spokesman disavow it. Poultry ordure doesn’t smell any worse than that.

But Obama is very careful to launch dirty attacks without getting any on his hands. The insults are anonymously sourced. The retaliation comes out of the bowels of the bureaucracy. And he only finds out about it from the media. That allows him to retain what he cares about most: his popularity.

Obama and his people like to think that their dishonesty is a superpower. They pat themselves on the back for stabbing everyone else in theirs. Sometimes their smugness over how well they use the media to lie and smear gets out of control. Like the time Obama’s Goebbels, Ben Rhodes, boasted to the New York Times about how easy it was to fool everyone about the deal to protect Iran’s nuclear program.

After Trump won, it was business as usual.

Obama put on his best imitation of decency while his people went on preparing to undermine Trump at every turn by smearing him, wiretapping him and doing everything possible, legally and illegally, to bring him down. It was the same phony act that he had pulled for eight years, bemoaning the lack of bipartisanship while ruling unilaterally as a dictator, destroying the Constitution while hectoring us about our values, denouncing racism while organizing race riots, complaining about the echo chamber while constructing one and lecturing us on civility while smearing anyone who disagreed.

Trump’s killer instinct lies in understanding that hypocrisy conceals weakness. That is what powered him through the primaries and then through an election. His instinct is to grapple directly with a target. That is also the source of his popularity. Meanwhile the source of Obama’s popularity is his hollow likability. He’s likable only because he is almost always too cowardly to say what he really thinks.

Americans have seen the real Trump: because he is, in his own way, always real. Obama is always unreal. When Trump and Obama have appeared together, Obama seemed less real. He is a brand wrapped in all sorts of images that have nothing to do with who he really is.

Trump has always understood that Obama’s bravado was hollow. Obama boasted that he would have defeated Trump. Then he went on to try to do that with attacks from behind the scenes routed through government loyalists and media operatives while pretending that he had nothing to do with any of it.

But Obama and his people had learned nothing from how Trump had won the election. When Trump is attacked, his response is to go directly for the attacker, no matter what the argument is or how it’s sourced. Trump doesn’t get bogged down in debates or befuddled by media echo chambers that are so totally enveloping that they resemble reality. He just smashes past them to the source of the smear.

That is exactly what he did by calling out Obama’s eavesdropping. He bypassed all the layers that Obama had put in place to insulate himself from involvement in the attack, the media echo chamber, the staffers who handed information to the media and the government loyalists who provided the information to the staffers, to strike at the wizard behind the curtain.

And, in doing so, he made a mockery of Obama’s bravado.

When Obama boasted that he could have beaten Trump, he meant that he could have done so using the same tactics that worked so well against McCain and Romney. Like most of the media, he had failed to understand that these tactics don’t work against Trump because he is a moving target. Trump created his own brand. Unlike most presidential candidates, he doesn’t need consultants, and unlike most Republicans, he isn’t worried at all about likability. That’s why he won an election and still has majority support for his policies, including the most controversial ones, despite poor likability.

Obama is obsessed with being liked. In the media space, effective messaging depends on likability. But Trump upended the same formula that had ruled presidential politics since Nixon vs. Kennedy. Instead he casually tosses likability aside to grapple with opponents, rivals and enemies. Trump won this election by forcing opponent after opponent to either fight him on his own terms or back away.

This includes the media, which has tried to grapple directly with him, with disastrous results.

The Obama machine, a massive propaganda matrix that alternates between lying and gaslighting, is not built to handle Trump. And Obama isn’t built to handle Trump either. Obama’s hipster transgressiveness made him seem cool when up against Romney or McCain, but everything Trump does embodies real transgressiveness. The machine is built on limiting the freedom of action of Republicans by intimidating them with political correctness and potential smears. But Trump doesn’t care about any of that.

Trump is willing to throw everything into an attack. Obama’s people build complicated traps that he walks through without thinking twice. Obama plays chess. Trump overturns the board.

Obama’s strategy was to create so much chaos that the White House wouldn’t be able to get anything done. Instead it would ricochet from scandal to scandal. Similar tactics had proven quite effective in the second terms of Reagan and Bush. But Trump thrives on chaos. Many of his supporters want him to be a disrupter. Chaos translates to effectiveness. The more noise he makes, the more he’s changing things.

President Trump has made it clear that in response to these attacks, he will directly challenge Obama. And that breaks down Obama’s entire plan of using proxies to do his dirty work while he gives inspiring speeches. Trump will not let Obama get away with attacking him and then hiding behind phony idealism. And he intends to make the Obama machine into the issue in these attacks.

Obama’s plan involved a gradual emergence to deliver more sanctimonious lectures about “who we are”. It did not involve getting directly into a fight with Trump. But, as his other opponents discovered, Trump doesn’t give you a choice.

The favorite quote of Clinton’s damage control man Chris Lehane came from Mike Tyson. “Everybody has a plan until they get punched in the mouth.” Obama’s people like to think that this is what they’ve done to Republicans, Iran Deal opponents, police officers and even President Trump. But Trump is showing them what the expression really means.

Obama had a plan. Then Trump punched him in the mouth.

The plan to entangle key Trump people in scandals hit a roadblock. Instead the wiretapping accusations have become the issue. And Obama’s people have been forced to come out and offer cautious denials.

And Obama and his dirty tricks have been dragged out from behind the curtain.

Trump and Obama are two very different men. Their personalities, as much as their politics, will define this conflict. The media routinely accuses Trump of having totalitarian instincts. But the true totalitarians are men like Obama those who hypocritically use the machinery of government to go after their opponents while pretending to be virtuous. President Trump has always fought his fights directly.

And the battle for America has only begun.