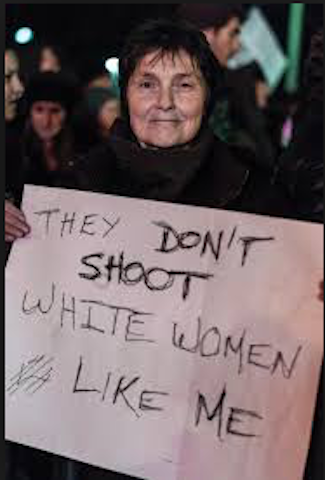 A proposal has been making its way through the social justice sewer system to have white people pay a 5% privilege tax.

That would be a lot cheaper than the current wealth redistribution built into the tax system.

In 2004, black people made up 12% of the population and 20% of those who didn’t file taxes at all. It was estimated that 50.7% of African American households, 52% of Hispanic households and 37% of white households paid no income taxes.

The numbers would likely have only gotten worse after the recession, which destroyed large numbers of African-American jobs, and the Obama years, which traded social welfare for economic progress,

An otherwise equal tax system with a 5% white privilege tax would be an enormous improvement.

How do you calculate the income losses for a white student shut out of college by affirmative action or a white business owner’s income losses due to preferential business programs aimed at minorities?

The white student would happily pay that 5% to be allowed to go to college instead of being told that more diverse students with worse grades will cut ahead of him in line because they are “disadvantaged”. It would be easier for the white business owner to calculate in a fixed privilege tax for an otherwise competitive market than the intangible forms of diversity discrimination that rig the game.

A 5% white privilege tax would be far too honest. The real tax is hidden and much higher.

If white people can just braid their hair in dreadlocks and spend a week in a tanning salon before renaming themselves Mkesi Daluboo or Willami Clintonoo, what good is a white privilege tax?

The only fair way to do it is with a DNA test.

Commercially available DNA tests make it easy to calculate the percentage of European and more diversely non-European ancestry. Every taxpayer could establish the exact diversity of his ancestry and determine his privilege tax that way.

The results would be interesting.

Henry Louis Gates Jr, the Obama pal who blamed racism for his confrontation with police, has 50% European ancestry. That will be a 2.5% white privilege tax. Please.

But Asian-Americans do have high intermarriage rates so before long their children, like much of the population of the United States, will end up with European ancestry and white privilege.

Is there an alternative to this madness?

The wealthy white boy in dreadlocks who lights up at Bob Marley tribute concerts and denounces our “unjust, racist society” would be free of his white privilege tax while his fellow African-American student who is poor, works hard and speaks like William F. Buckley would be hit with the full privilege tax bill.

If race is just a social construct then we might as well be honest about rewarding obnoxious behavior.

Rachel Dolezal can run the NAACP, teach a useless identity politics course, sell hideous identity politics art, then go on food stamps after her fraud is exposed, and write a book blaming racism. The social construct we’re rewarding here is not race, but obnoxious and exploitative behavior.

And anyone can be obnoxious.

Only Japan or Saudi Arabia can be truly free of white privilege.

Either that or we follow the sordid tradition of punishing ideas of race. We can tax people for being insufficiently stereotypical. We can harm those who strive to succeed to benefit the Al Sharpton and Rachel Dolezal shakedown crew who monetize the failures of communities for their own profit.

There is one more option.

We can be Americans. We are, as President Trump said, “one people, with one destiny. We all bleed the same blood. We all salute the same flag. And we are all made by the same God.”

The civil war and the civil rights movement were both made possible by that common understanding of nationhood and origin. But the sad legacy of the civil rights movement is that it descended into divisive Black Nationalist movements that rejected a common nationhood and into radical leftist politics that rejected religion, while, in the Obama style, appropriating its dramatic gestures and oratorical force.

Take away any national commonality and you are left with quarreling tribes using bloc voting, group alliances and aggrieved narratives to lay claim to power and privilege.

Anti-racism has become a narrow tribal campaign that invokes diversity to appear universal. Its goal is not a more united country, but a more successfully divided one. The strange alliance of white leftists who want to destroy “whiteness” to create a truly universal society and Black Nationalists who want a tribal society can only result in a nation that is less united and more divided along the lines of race.

So why not levy a 5% white privilege tax? Every racist movement blames its abuses on its victims. It calls its greed, justice and its hatred, love of its own people. It makes up for its insecurity with anger.

That is all the social justice movements of the left have to offer us. They campaign against racism with more racism. A toxic mix of narcissistic self-pity, angry insecurity and entitled greed lurks under their pseudointellectual identity politics. The men who founded this nation were not perfect, but they believed in being better than they were. The leftists riding the nuclear bomb of identity politics down through the clouds to a radioactive utopia of utter misery believe only in making it worse.

Former Attorney General Eric Holder was right. We are a nation of cowards on race. And that is what he, and the other racists and radicals, are counting on. We are too afraid to defy those who divide us.

Too afraid to stand up to him and to all those like him who have been passing off racism as progress, too afraid of false accusations of racism by racists like him and too afraid to rebuild this country as a united nation rather than a collection of intersectional tribes allied against the idea of a common racial enemy.

We can be one nation. Or we can start charging racial taxes. The choice is ours.

John McCain Once Again, As Usual, Aids and Abets Leftists.