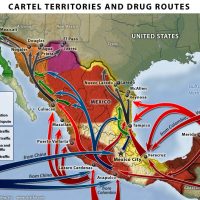 It’s a name that just about everyone recognizes, and most people know the man behind it at least well enough to react with distaste and revulsion when they hear it: Pablo Escobar. He is one of the most infamous criminals in history, a drug lord who was so successful in smuggling cocaine from his home country of Colombia into the United States that he rose to become one of the world’s wealthiest men – at one time, his net worth was estimated at around $30 billion US dollars. Despite the nature of his business, he had little need to hide this money, as he practically owned the Colombian police, most of who knew better than to attempt any law enforcement operations against him. In one case, when they tried and Escobar was arrested, the officers who took him into custody were later found dead. Charges against him were dropped shortly thereafter.

Escobar rose to such heights of infamy because he was the first criminal to capitalize on the black drug market that exists between South America and the US. Since his death, massive multinational crime businesses called “cartels” have taken the scene, fueled by the seemingly inexhaustible supply of drug money waiting to be won. And they are so willing to do whatever it takes to get that money that they have become, next to global terrorism, one of the greatest threats in the world to American security.

That’s not an exaggeration, nor is it fanciful hyperbole. The South American drug cartels are brutal, truly evil organizations. Like Pablo Escobar, they often bribe or intimidate the police in their home countries to allow them to do business unimpeded. Those who oppose them at home tend to disappear, never to be heard from again. They import these tactics into their dealings in the United States. American law enforcement are far more difficult (though, sadly, not always impossible) to buy, but those attempting to stop the flow of drugs from south of the border risk being targeted by violence to remove their resistance. They often face enemies within their own communities, as the cartels typically recruit Americans (or illegal immigrants) from among the youth, corrupting children into a life of crime. Kidnappings, beatings, and assassinations are routinely performed by these kids turned street thugs. And when a higher degree of skill is needed, the cartels keep squads of professional hit men on retainer, each ready to die for their drug group. MS-13, Sinaloa, Guadalajara; these are but a few of the massive drug cartels that prey on our children and terrorize our communities (and “terrorize” really is the right word; the similarities between the cartels and Islamic terror are as striking as they are disturbing).

They do this because of the enormous financial rewards awaiting them: it’s estimated that cartels make over $64 billion in profit every year from their illicit American drug sales, “earnings” that would make them successful and solid corporations if their trade were legal. Of course, for all that they make, they cost the United States nearly three times that amount – about $181 billion – in the health care costs they generate in people who become ill from using their products, the loss in work productivity, and the law enforcement resources we are forced to divert to fight them.

But let’s be clear on what we mean by “fighting” drugs, because we can accomplish an anti-drug agenda without prosecuting the disastrous “war on drugs” we’ve seen for decades now. That “war” is and has been utterly ineffective, not least because today’s young people have access to the Internet and are simply too well-informed to be taken in by the exaggerations and outright lies told to their age group during the 1980s and 90s. Moreover, the way we were pursuing the noble goal of eliminating drug use actually empowered the cartels, by keeping them in control of a firmly “black market” that simply wouldn’t exist without US laws structured as they are. These cartels also have ties to U.S. gangs that serve as distribution networks in the interior United States.

These formidable drug cartels, the human smuggling networks and gangs they leverage, have control over the routes into the United States and challenge our efforts to secure our borders. The cartels operate along the border with military grade weapons, technology and intelligence and their own guerrilla terrorists. This cartel is well financed, and it is highly involved in intelligence collection on both sides of the border. We need to attack the cartels directly – not the people they seduce with their products.

Our task is made no easier by the so-called “immigration advocacy groups” in my home state of California, which are asking CA Attorney General Kamala Harris to keep the federal government from having access to the state’s database of known gang members. Why, you might ask? Why could they possibly want to hamstring law enforcement activities against street gangs? Simple: because so many gang members are illegal immigrants, and we can’t have any official investigation leading to deportations. Better by far, apparently, to allow powerful drug gangs to run unchecked in our communities, not only distributing drugs but causing all manner of other problems for us and our children.

That is why it is such an improvement over our previous administration that we have a President who understands the severity of this problem. Not long ago, following the swearing-in of Attorney General Jeff Sessions, President Donald Trump signed three new executive orders targeting organized crime in general and the drug cartels in particular. The first calls for the establishment of a Task Force on Crime Reduction, with the requirement that this group submit a report to the White House on its progress at least once a year. The second orders increases in sharing of intelligence between American law enforcement agencies, with the aim of making anti-cartel activities more efficient and effective. Finally, the third focuses on protecting law enforcement personnel, ratcheting up prosecution of criminals who do harm to our police.

President Trump has explicitly stated that he plans to “break the back” of the illegal drug cartels. That’s an ambitious goal, and I’m not sure any one President could possibly accomplish it alone. But I support anything that our government can do to hunt down these barbaric groups, disrupt their operations, and do as much as possible to shut them down. Our children are counting on these efforts.