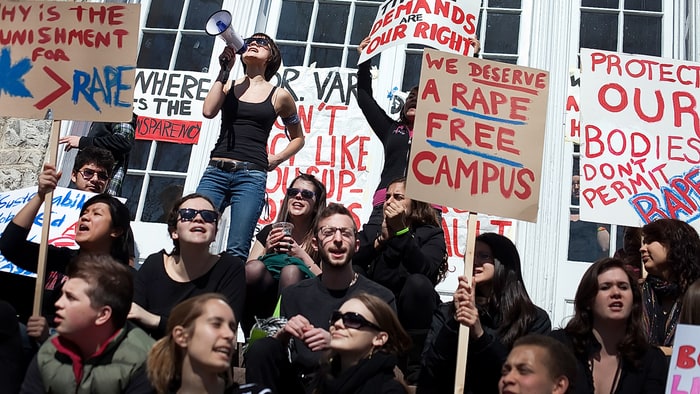 Whether victim or accused, male students on college campuses are not receiving their due process rights and in one case, even basic human rights are being ignored.

Consider the news coverage of a recent case at Drake University in Iowa where a disabled male student was accused of sexually assaulting a female student and not provided due process by the university.

According to the College Fix:

“While it’s not clear how far things escalated that night, the male student’s suit claims he was “not in a state to be with her” and “not able to give consent that night.” The accuser conceded “on the record” during a la
ter Title IX hearing that she initiated sex without his consent.

Despite dueling claims, only the male student was subject to an investigation. Drake University termed his own allegations against the female “retaliatory.”

‘Comfort rooms’ for accuser’s family, nothing for Male Student

During the course of the investigation and despite several pleas the male student was denied accommodations for his disabilities, which include “word retrieval” impairments, the suit claims.

In a nine-hour hearing, Drake University “forced” the disabled male student “to be his own advocate and act as his own legal representative … despite knowing full well” about his language disability, it says.

The university kept the parents out of the male students hearing, and gave them “fewer accommodations while simultaneously offering comfort rooms” for the female student’s family.”

The above case is just one of hundreds happening on college campuses every day in America since 2011 when the Department of Education’s Office for Civil Rights issued a Dear Colleague letter that defined sexual violence on college campuses as a matter of the Title IX sex discrimination law. An equal and accessible learning environment needs to be free of sexual harassment, the OCR decreed, and schools were obliged to comply. However, what the Letter actually did was to minimize the due process granted to accused students and prioritize campus investigations of alleged criminal behavior over police investigations.

The nonprofit Stop Abusive and Violent Environments (SAVE) recently launched a campaign to repeal the Dear Colleague Letter, which it says is responsible for “trivializing the severity of rape,” “impairing the credibility of future victims” and “undermining” the presumption of innocence.

Attorney Cynthia Garrett  is President of Families Advocating for Campus Equality (FACE), and the President of the Board of Stop Abusive and Violent Environments (SAVE). Both groups champion fairness in campus sexual misconduct cases. Garrett works directly with the accused and their families.

In a recent interview with PolitiChicks, Garrett stated:

“What we represent is not a popular issue, we know that. But there are so many young men whose lives have been destroyed by these allegations.”

“In 2011 Obama’s Department of Education began pressing colleges to more aggressively police sexual assaults and threatening to take away Title IX funding from schools that failed to do so. During that time Universities across the country radically changed the definition of sexual assault, created Kangaroo Courts on Campus, and substantially scaled back protections for students (a majority men) accused of it.  This new brand of female empowerment has led to job loss, humiliation, expulsion, and even sometimes suicide of men in college who were falsely accused and were stripped of their due process rights.”

Victims are being turned away, the innocent are being falsely accused, and families are being harmed. At the heart of the problem is a legal system that has created broad definitions, weakened due process, and removed the presumption of innocence.

Garrett encourages our readers to contact FACE and/or SAVE if they (or somebody they know) experience this type of ‘gender injustice’ on a college campus.

SAVE — Stop Abusive and Violent Environments — is working for evidence-based solutions to end sexual assault and domestic violence.

FACE–Families Advocating for Campus Equality–advocates for equal treatment and due process for those affected by sexual misconduct allegations on campus and to support those students and their families.

The good news is that since Donald Trump has taken over the Oval Office, top Senate Republicans are now vowing to end the overreach used by Obama’s Department of Education, including the “Dear College” mandate of 2011.

“Administration officials “have abused ‘Dear Colleague’ letters and ‘guidance documents’ to mandate policies for schools without adhering to legally-required regulatory processes.” Lankford added, “Some of the most egregious examples of executive overreach and intimidation” took place at the department, “and I believe it was this type of overreach that the American people repudiated in this election.”