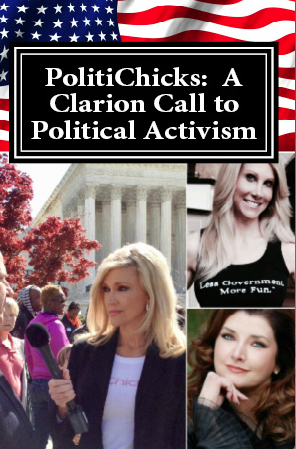 (Washington, D.C.) – PolitiChicks 2.0 has hit book shelves —The PolitiChicks are on the road this April with their new book PolitiChicks: A Clarion Call to Political Activism. Authors, Morgan Brittany, Ann-Marie Murrell and Sonya Sasser will be participating in a media tour starting March 23, 2017.

“The PolitiChicks,” led by owners Ann-Marie Murrell and Morgan Brittany, have been at the forefront encouraging activism and promoting political involvement on all levels. Their new book, “PolitiChicks: A Clarion Call to Activism”, with PolitiChicks contributor and new national spokesperson Sonya Sasser, is a collection of articles and essays from PolitiChicks contributors, the voices of conservative women & men, across the U.S. and is meant to encourage everyone to get off the sidelines and remind our elected officials who is boss.

Endorsed by former Governor Mike Huckabee, Lt. Col. Allen B. West and actor, Nick Searcy each applaud the clarion call from this collection of writings that highlight the election of President Donald Trump. The Clarion Call proves that Americans are fed up with business in the Capitol Beltway. Americans are tired of being pushed around and bullied by politicians, media, and Hollywood elites.

“Passionately Patriotic PolitiChicks, Ann-Marie, Morgan Brittany and their cadre of contributors, light up the political scene with their pursuit to shine light so others can see the Truth.”—AlfonZo Rachel, author and activist

ABOUT PolitiChicks:
In 2010, Ann-Marie Murrell helped create “PolitiChicks” as a webTV series. Today, Ann-Marie and actress Morgan Brittany own the very popular website which serves as a major platform for both women and men writers across the U.S. They are regular political commentators on television and radio and they have hundreds of thousands of followers throughout social media.

The three lead PolitiChicks are founder/publisher Ann-Marie Murrell, actress Morgan Brittany, and Sonya Sasser. They have each appeared on countless television and radio shows and are featured speakers throughout the U.S. Ann-Marie and Morgan are also co-authors of the bestselling book, What Women Really Want.