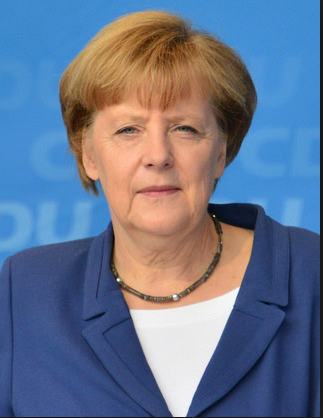 We all know Angela Merkel as that chubby German politician who invited the Muslims in. There is much more to her than meets the eye though.

Merkel was brought up in East Germany. I would not hold her Polish origins against her, although it is somewhat strange she held back revealing them for so many years (not until her 2013 biography came out did it become widely known that Merkel is of Polish origin).

Back when… in East Germany, she was a good and law-abiding citizen, member of the Communist Youth (Free German Youth), participating voluntarily in sundry social activities, which were always part indoctrination, part propaganda.

Having grown up in the same environment, I can tell you that you did not have to.  Personally, I refused to pay the Communist Youth membership fees, I spent the allowance for the fees on cheap salami instead (we were always hungry), and received a “B” in Morals. That was all right by me. My parents frowned and scolded me on the outside – but I saw pride in my mother’s eyes! After all, she had never stooped to being a Party member.

Of course, growing up in communism, we knew that non-Party members stood no chance at participating in higher education. Anything above the high school degree was vorbotten if you were not an active Communist Youth participant. Your (and your parents’) political activities (or lack thereof) were being closely watched and scrutinized ever since you were born – there was a file on everyone and it was made abundantly clear to us that if we did not toe the line, we’d end up as manual laborers in a commie factory under the fist of some little Brezhnev lookalike – or worse: if you openly spoke against the regime, you would be sentenced to a uranium mine for sedition. Few people returned from those…

Merkel became a member of the Academy of Sciences, and a leader of the Communist Youth District Board, and Secretary for an organization called “Agitprop” (Agitation and Propaganda). Let me tell you that you did not become all these unless you were an active, willing and wanting communist. The Academy of Sciences was packed with big wig commies, as was every other board and educational organization. After all, you can see the same happening with our educational system today. If it walks like a duck and quacks like a duck, trust your instincts – it is one.

Later, Merkel claimed that she was a “secretary for culture” and blamed her “poor memory…” Of course, we know who else among our recent big shot socialist candidates claimed “poor memory…” Naturally, in response to journalists’ questions regarding her political leanings before 1989, Merkel also stated: “What does it matter anyway… I believe I won’t know anything when I’m 80.” Yes, we have heard that phrase somewhere else as well… As Dinesh D’Souza would no doubt affirm, this kind of thinking a characteristics of all crooked politicians: grab as much as you can while you can – power, money… who cares.

Let me also tell you that you did not have to become proficient in Russian – unless you really sympathized with the regime and were keen on Marxism-Leninism. There were competitions in Russian, yes, and the winners would sometimes be awarded a 2-week stay in a children’s campsite in Odessa. I ran away from those as fast as I could, hating the language and what it represented. Angela Merkel? Apparently, she kept winning those competitions in Russian proficiency – and loving it all the way. She speaks fluent Russian and is proud of it. Do not be misled by the fact that she studied physics – you could not have studied anything else unless you were really proficient in Marxism-Leninism and confirmed to be so by the higher-ups first.

In 1989, new democratic parties arose in former Eastern Block countries. In Czechoslovakia, it was the Civic Forum. In Germany, the Democratic Awakening. Angela Merkel ran for the DA, became the deputy spokesperson of the new pre-unification government, and when the DA merged with the East German CDU, which in turn merged with the West German CDU, Merkel’s political career took off. Of course, everyone was suddenly a democrat, not a communist. People turned their coats so fast, it made your head spin… and, deep within, you would ask yourself: What happened to all those “comrade teachers,” “comrade professors,” “comrade superiors?” – Nothing. They are still there, only call themselves democrats – and now, with the lax and accepting attitude to socialism – “social democrats.” You cannot take a commie and make him/her a democrat – ever. It does work the other way round though…

Merkel stood for election at the 1990 federal election, was elected to the Bundestag, won the seat six times, becoming the Minister for “Women and Youth” under Chancellor Helmut Kohl. This has always been her forte: “Agitprop” by another name. It is very natural for a turncoat communist to tend to the more left-leaning environment where they feel comfortable. In 1994, Merkel became the Minister for the Environment and Nuclear Safety. We know what those European “green parties” are really all about… Her “green coalition” is what has brought Germany down to its current state of submission and malignant degeneracy.

Chancellor Kohl called Merkel “mein Mädchen” and helped her to real power. Never mind–what does it matter anyway? She did not blink an eye and turned on him during a party funding scandal, which affected both Kohl and his successor as CDU Leader, Wolfgang Schäuble. Merkel criticized Kohl publicly and demanded a “fresh start” for the Party without him… She took Schäuble’s place – and the rest, as they say, is history.

Now, in view of who Merkel really is, is anyone still surprised at her socialist-globalist propaganda and the state of lawless disregard for national pride and the glory of formerly thriving, independent, self-reliant, capitalist Germany she has brought in her wake?