Sen. John McCain has consistently received a conservative rating of “F” from Conservative Review.  He spent years appeasing and agreeing with the Obama administration.  He all but endorsed Hillary Clinton for president (and his granddaughter publicly did so). 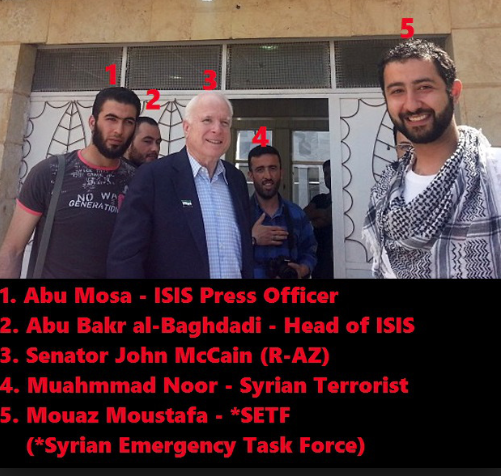 And remember when McCain and his buddy Sen. Lindsey Graham supported arming Syrians “rebels” (how would they know which were the ‘good guys’ and/or ‘bad guys’?), and denigrated Congresswoman Michele Bachmann and others for trying to shine the light on Muslim Brotherhood ties in the Obama administration?  In a 2013 article entitled “Who is the Real John McCain?” Carolyn Elkins wrote, “Is John McCain a Republican or Democrat? Is he still a Maverick or is he a blind old fool comparable to Jimmy Carter, supporting those who would prefer to see Israel wiped off the map and an open society for the rest of us? Whatever he may be, his decisions have not been for the good of America, and perhaps it’s long past time to find out why.”

Now here we are in 2017 and it appears John McCain is working triple-time to undermine the Trump administration.

“The senator from Kentucky,” said John McCain, speaking of his colleague Rand Paul, “is working for Vladimir Putin … and I do not say that lightly.”

What did Sen. Paul do to deserve being called a hireling of Vladimir Putin?

He declined to support McCain’s call for a unanimous Senate vote to bring Montenegro into NATO as the 29th member of a Cold War alliance President Trump has called “obsolete.”

Bordered by Croatia, Bosnia-Herzegovina, Serbia, Kosovo and Albania, tiny Montenegro has a population roughly that of D.C., and sits on the western coast of the most volatile peninsula in Europe.

What strategic benefit would accrue from having Montenegro as an ally that would justify the risk of our having to go to war should some neighbor breach Montenegro’s borders?

Historically, the Balkans have been an incubator of war. In the 19th century, Otto van Bismarck predicted that when the Great War came, it would come out of “some damn fool thing in the Balkans.” And so it did when the Austrian archduke was assassinated in Sarajevo June 28, 1914, by Serbian ethnonationalist Gavrilo Princip.

Aflame with ethnic, civil and sectarian war in the 1990s, the western Balkans are again in political turmoil. Milo Djukanovic, the longtime Montenegrin prime minister who resigned on election day in October, claims that he was targeted for assassination by Russia to prevent Montenegro’s accession to NATO.

Russia denies it. But on the Senate floor, McCain raged at Rand Paul: “You are achieving the objectives of Vladimir Putin … trying to dismember this small country which has already been the subject of an attempted coup.”

But if Montenegro, awash in corruption and crime, is on the verge of an uprising or coup, why would the U.S. issue a war guarantee that could vault us into a confrontation with Russia – without a full Senate debate?

The vote that needs explaining here is not Rand Paul’s.

What do YOU think? What are your thoughts about Sen. John McCain? Sound off in the WND poll!

It is the votes of those senators who are handing out U.S.-NATO war guarantees to countries most Americans could not find on a map.

Is no one besides Sen. Paul asking the relevant questions here?

What vital U.S. interest is imperiled in who comes to power in Podgorica, Montenegro? Why cannot Europe handle this problem in its own backyard?

Has President Trump given McCain, who wanted President Bush to intervene in a Russia-Georgia war – over South Ossetia! – carte blanche to hand out war guarantees to unstable Balkan states?

Did Trump approve the expansion of NATO into all the successor states born of the bloody breakup of Yugoslavia?

Or is McCain hijacking U.S. foreign policy on NATO and Russia?

President Trump should tell the Senate: No more admissions to NATO, no more U.S. war guarantees, unless I have recommended or approved them. Foreign policy is made in the White House, not on the Senate floor.

I don’t always agree with Rand Paul, but the good Senator from Kentucky DOES NOT work for Vladimir Putin. John McCain has truly lost it and is using the slur as a last grasp at bullying Paul into voting for entry of Montenegro into the North Atlantic Treaty Organization (NATO). Admittedly, I know nothing about the country and they probably are under assault from Russia. Paul’s vote however is not a determining factor on whether he is a stooge of Russia or not. That is the most ridiculous thing I have ever heard. McCain should be ashamed of himself, but he won’t be. Senility protects him from such things I guess.

McCain didn’t just say that Rand Paul supports Russia, he came right out and said that because he didn’t vote the right way, he obviously works for Putin. He just accused Paul of Treason on the Senate floor… doesn’t anyone think that is beyond the pale these days? A spokesperson for McCain tried to justify his comments and failed. “Senator McCain believes that the person who benefits the most from Congress’s failure to ratify Montenegro’s ascension to NATO is Vladimir Putin, whose government has sought to destroy the NATO alliance, erode confidence in America’s commitments to its allies, overthrow the duly-elected government of Montenegro, and undermine democratic institutions throughout Europe.” Then they demanded that Paul provide an explanation for his vote. After that insult, don’t expect one.

Maybe all of this is because John McCain is still mad at Donald Trump for his very disrespectful comments about him during the primaries.  That might explain why he is throwing so many temper tantrums now–but it doesn’t explain why McCain has consistently sided with enemies of conservatives (and the U.S.) throughout the past 8 plus years, and the very dangerous lines he seems to be crossing now.

Daniel Greenfield: The Price of Privilege