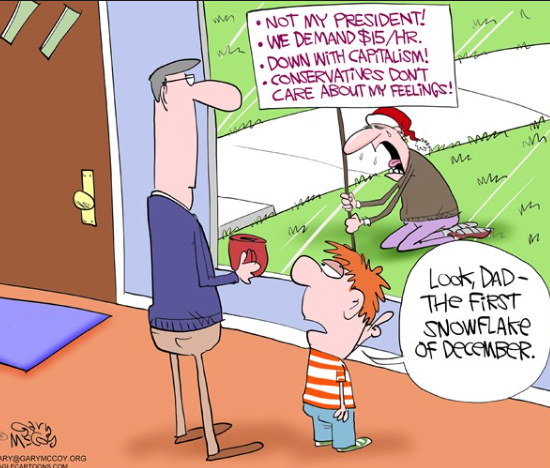 The stage was set on election night 2016. The polls began to close from the east coast to the west. Donald Trump won and America began to brace itself for the possibility that we really do have an opportunity to see if his administration could in fact “Make America Great Again.”

There was an sigh of relief in the air, and those who considered themselves patriots, lovers of our U.S. Constitution, and America’s Traditional values, felt that the Union had been saved, and breathed a sigh of relief.

Then the snowflakes began to fall.  Those who opposed Mr. Trump from day one began to gather, and protest
out of anger and dismay.  They began to make threats, invent excuses to deny Mr. Trump the victory, and vow that they would disrupt his inauguration by any means necessary.

Some of those on the Progressive side began to complain that they faced unforeseen anxiety, and fears.  They held protests and sought sanctuary in safe spaces because of their fears. Universities, schools, work places and cities came to their rescue, offering them help because of their distress.

The Protesters were said to have gathered spontaneously, and were not organized.  The evidence seems to prove otherwise.  Many of the protester were there as a result of responding to Craigslist ads, and many were found to have been trained in advance for such an opportunity.

Many began to see for the first time that even though Barack H. Obama was set to leave the Whitehouse, and that Hillary Clinton had lost her bid to continue his legacy, or perhaps bring worse failures upon America, began to feel as though they were being caught in the process of facing the fallout from Obama’s promise of “Fundamental Change” that had been brought about by his pen and his phone.

Flashbacks of his failures began to echo in the minds of those who looked for a fresh and bold approach to save our Nation as promised by Donald Trump. People began to wonder if he would keep his word after being sworn into office, and would the new GOP controlled Congress help him restore the promise of the American Dream.

What would happen to Obamacare, our military, immigration, crime, the border, unemployment, jobs, education, our economy, the threat of war and terrorism, abortion, national security, and a host of other issues that were the focus of debate over the past election cycle.  Would these issues be addressed, and would we finally see a return to conservative values, and the principles that made America a great and prosperous nation?

All eyes were fixed on the Inauguration on January 20, 2017. The rumors of violence abounded. Those who had opposed Mr. Trump vowed to disrupt the peaceful transfer of power in America with civil disorder. They tried, but failed.

After the Inauguration President Trump began to keep his campaign promises at record-breaking speed, and Congress began the process of approving his cabinet, but as expected the Democrats obstructed.

To the surprise of many on the left and on the right, Mr. Trump kept his word, and erased the past administrations actions with the stroke of his pen.  He introduced one of the most conservative cabinets in history, and also nominated a very strong and conservative judge to the U.S. Supreme Court as promised.

Members of his Administration, including Vice President Mike Pence, even attended the March For Life event, sending shock waves throughout the abortion community, but giving a breath of fresh air to those who support the Pro Life movement.

Once again, the snowflakes erupted. We witnessed the Woman’s March, which was held in locations across America display all of its hoopla, and the angry frenzy of a media, and Hollywood, that displayed its hatred for the new administration like we’ve never seen before.
They threatened more unrest and even mentioned the thought of blowing up the Whitehouse.

Then there was the eruption on the campus at Berkley over the appearance of Milo Yiannopoulos, to give a speech. 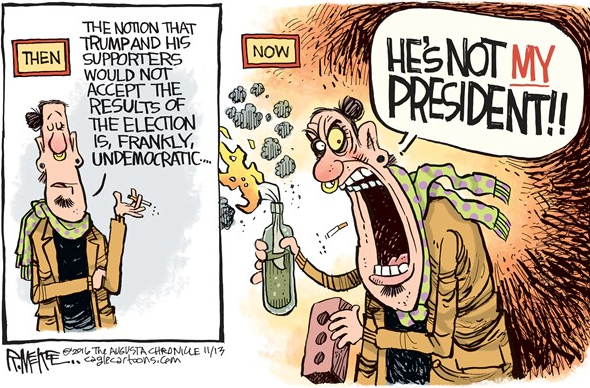 Violence erupted and the speech was cancelled, all under the banner of protecting the right of free speech.

Has America reached its tipping point?  Have we lost our way, and our morals?  Have we lost our culture to those who have educated our children in their misguided socialist doctrines?  Have we allowed our lack of character, and disrespect for God, and the Judeo Christian ethics that our Founders believed would make this nation great, lead us down the pathway to our demise?

These are questions that every American must consider no matter which side you are on.  Our future depends on how we answer each one of them.

Do we continue to prosper as a great nation based upon the principles that were given to us by those who lost their lives and fortunes to form the greatest nation on earth, or do we change our course and listen to those who teach that in order to be great we must rely on the government to provide for us from the cradle to the grave?

Should we allow or nation to increase its population by an immigration process that does not properly address the vetting of those coming here?

Our Founder’s sought to protect us from a tyrannical government system, and gave us a great foundation that leaped America to the forefront of the world in a few short years.  We have prospered because of their inspired insight and guidance.  They wanted us to make it even better.

The choice is now up to us and we still have a republic IF WE CAN KEEP IT.

Which path will you take to advance our future?  The choice is yours.  Freedom is a terrible thing to waste!

“FREEDOM And LIBERTY” / Use Them Or LOSE Them!” {Emery W. McClendon)