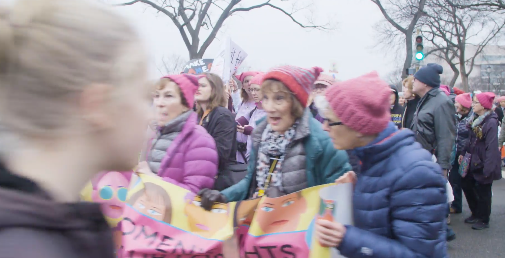 Imagine the leader of a labor union going to corporate management and saying ‘all of us are going on strike tomorrow.’ Assume you are the CEO. If you treat these employees fairly, pay them competitive wages, offer them excellent health coverage, and ensure a safe and friendly working environment you would naturally ask, “Why? How have I failed you?” Now imagine the union leader saying, “You didn’t do anything to us; we aren’t mad at you.  We are doing this to protest President Trump’s policy on immigration. Our stance is that everyone should be allowed to freely enter the United States without scrutiny because our future depends solely on more people coming to live here.”

How does one deal with such a crazy line of thinking? How does one even arrive at such a stance? I would love to know the thought processes that would lead a person to conclude that if they skip work, close their business, refuse to shop, skip classes, etc… that it will somehow deal a blow against President Trump and his perceived authoritarian regime. The whole point of boycotts, strikes, and protests should be to force someone’s hand and/or realistically affect change. If you are going to make personal sacrifices you should expect something out of it.

One goal could be personal financial gain or the infliction of financial harm on another or both. Another goal could be to pressure lawmakers to either pass or revoke a law in order to establish some sort of moral equality. Even a group of peaceful protestors, comprised of people who espouse rational and logical thoughts (not a bunch of people protesting just for the sake of it) could evoke change because they force you to respect them.

When labor unions go on strike, the workers make a sacrifice because their employer isn’t going to pay them while they are on strike. At that point it becomes a battle of wills and resources. Without income, things become harder on the striking workers but it also exacts a price on the employer because without all of their employees, they can’t operate at full capacity. The employees have leverage because they can disrupt profits by reducing their employer’s output and efficiency. As the losses mount, both sides begin to have an incentive to reach an agreement.

I fully comprehend labor unions and strikes. That makes sense to me. The strikes and the picketing have a purpose. People aren’t gathering together just to protest because it is a freedom guaranteed by the first amendment. They are making sacrifices because they believe it will be worth it in the long-run and will hopefully benefit those who follow behind them. I don’t have to pick sides to understand everyone’s line of thinking.

I do know that successful protests almost always involve leverage. Two of Dr. Martin Luther King’s must successful protests involved leverage. In one case, he organized a boycott of the segregated Montgomery, Alabama mass transit system by all African-Americans. It took a year, but ultimately the buses became segregated because most of their revenue came from African Americans. In another case he organized protests and sit-ins aimed at businesses in Birmingham, Alabama with racist policies. Despite being peaceful, protestors were arrested, but King understood that you can’t arrest everyone. The jails aren’t that big. The disruption created by the peaceful protests King organized led many businesses to abandon racist policies. Dr. King left a lasting legacy because his protests were peaceful, well-organized, and most importantly, had specific objectives such as overturning certain laws. He wasn’t always successful in the short-term, but the long-term impact of his vision is now a part of American history and he is widely regarded as an American hero.

We desperately need leaders like Dr. King today. King organized protests aimed at accomplishing something. Today’s protests are aimless and often take advantage of the very people they are ostensibly supposed to benefit. I would never presume to say what it is like to be a member of another race. That would be insulting. However, I seriously doubt Dr. King would approve of organizations such as Black Lives Matter. Every time an African-American is killed by a member of law enforcement (regardless if the police officer is black or white), BLM stages a protest. I fear one day a mass riot of historical proportions could result. I also believe that a powerful few are using their wealth and influence to create tension for their own personal benefit.

What exactly do contemporary American protestors want? What do they hope to achieve? Where is the logic in an immigrant closing their own business to protest Trump’s immigration policies? How does it hurt Trump? He can’t be impeached simply because of protests. Further, from a global stance, Trump is hardly an authoritarian dictator. If that were the case, he would have protestors killed or captured. So what is going on? How does giving up your own wages and earnings force Trump’s hand? It makes as much sense as a labor union going on strike because of the actions of a third party, not the employer. It’s tantamount to a person going into a bank unarmed and demanding all the cash and threatening to kill themselves if the tellers don’t comply. Where is the leverage in that situation?

Trump was elected, in part, because of his tough stance on immigration. He is only doing what he said. The mass media demonizes the man, but the mass media doesn’t reflect the opinions of every American. After months and months of the mass media criticizing Trump and predicting an easy Clinton victory, Trump won the election handily and in the process proved the mass media isn’t above flat out lying about the facts. To me, the mass media has zero credibility.

When did non-Americans become entitled to anything America has to offer? A lot of people are acting as though this were the case. It isn’t. Has the United States benefitted from legal immigration? Absolutely. Is everyone entitled to American citizenship? Absolutely not. I think of every human life as sacred. I believe all humans are equal in the eyes of God. I don’t want anyone to suffer, but American citizens have to regain a little bit of sanity. Unless, protestors are advocating that the United States conquer the planet, everyone can’t be an American citizen.

From an historical perspective and from the standpoint that all humans regardless of color are equal, I think a major point needs to be made. The greatest sin this country ever committed was slavery. It has left feelings of bitterness and resentment that linger to this day. African Americans were forced into labor. As a result, the descendants of African Americans held as slaves have a valid argument that this country was built on the backs of their ancestors as well. The Civil Rights Movement was completely valid because it sought to give African Americans equal treatment under the law. Given their American heritage, African Americans are entitled to the same rights as white Americans. I understand that.

I don’t understand how someone can argue that someone whose ancestry has no relation to the growth and building of the United States is entitled to anything from America. Why would blue collar immigrants even want a mass influx of immigrants? Won’t those individuals compete for their jobs?

Back to the labor unIon analogy. If you went on strike to protest the actions of the President on immigration policy, which has nothing to do with your employer, how dumb would you look if the people who crossed the picket line and effectively busted your strike were the new immigrants themselves?