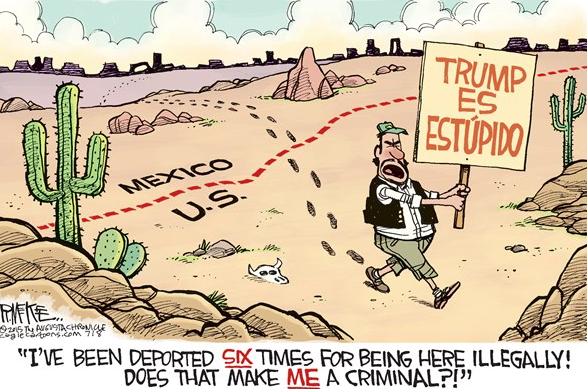 According to the LA Times, some of the folks who’ve had been entering the U.S. illegally are becoming mentally damaged worrying about how difficult it might soon become to illegally enter the U.S…

At a shelter here across the border from Arizona, volunteers are stocking food and other supplies in case of a large influx of deportees from the other side.

“We don’t want any surprises from Mr. Trump,” Juan Francisco Loureiro, director of the Don Bosco migrant center, said of the U.S. president’s plans to step up deportations. “We need to be ready.”

Along the border, dejected recent deportees and new arrivals from the south headed for the U.S. are weighing whether to vault for the north or just go home — essentially, admitting defeat.

“It’s just too hard now with Trump,” said Alejandro Ramos Maceda, 33, recently deported after being picked up on a traffic charge in St. Louis — where he said he has a wife and two daughters, both U.S. citizens.

Discouraged, Maceda said he plans to stay in Mexico for the moment, a choice that many other deportees with families in the United States have reluctantly embraced.

“Maybe my wife will come visit,” he said, his tone not betraying much hope.

Not one post has been driven into the ground for President Trump’s proposed new border wall. There has been no sign of ramped-up Border Patrol forces as part of the administration’s promised enforcement buildup.

But interviews on the Mexican side of the frontier suggest that, in just a few weeks, the new president has had a profound effect on how people in the border region act, plan and, perhaps more importantly, think. Although his strategy has scarcely begun to be enacted, Trump is deep in people’s heads.

“It’s just a lot harder to cross than we thought,” said Vicente Vargas, 15, one of five teenagers from Mexico’s Puebla state who said they were going back home, discouraged at how difficult, and costly, it is to get over the border — especially given the likelihood that they would be apprehended if they made it to the other side.

Is Geert Wilders the "Donald Trump of the Netherlands"?