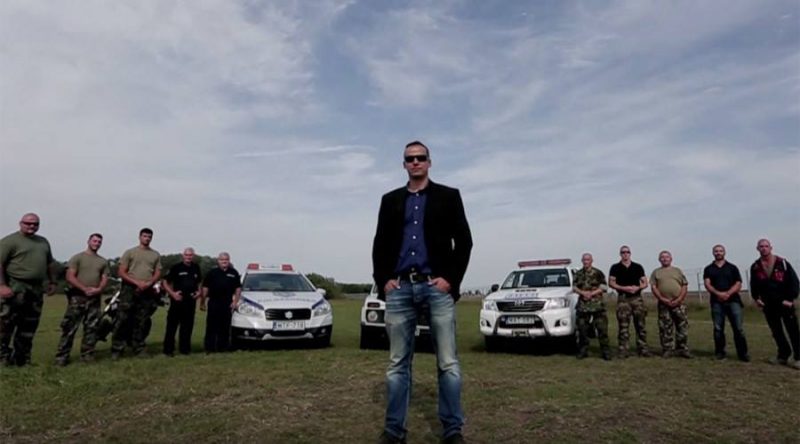 This forty-five-year-old and his team of bounty hunters have caught hundreds of immigrants trying to make it into Hungary, on the way to neighboring Austria and beyond, on the so-called Balkan smuggling route.

Toroczkai is the charismatic mayor of Asotthalom who has made it his life’s work to prevent what he calls the destruction of his country.

“Mayor Toroczkai is in charge of a small Hungarian town called Asotthalom, on the border with Serbia — a nation still outside the EU — which was pitched into the centre of the refugee crisis in 2015, when thousands of immigrants started pouring across the unprotected border each day.
The crisis erupted after Angela Merkel, the German Chancellor, announced to the world that Europe would welcome refugees, prompting more than one million to head to Germany alone, while hundreds of thousands of others made for Britain, France and Italy.

With locals in Asotthalom — a traditional farming town with a population of 5,000 — finding groups of immigrants sleeping in their gardens and outbuildings, and others watching aghast as thousands streamed through the centre of the village on their way through Europe, the mayor decided enough was enough.
He has introduced a zero-tolerance policy against all migrants, saying that the very future of Europe is at stake because of people he calls Muslim ‘invaders’ and ‘future terrorists’, and has vowed to stop this movement of people.

He has announced new rules for the town he runs, and wants the rest of Hungary to follow suit, banning the building of mosques, making the Muslim call to prayer illegal, and banning the burqa and the ‘burkini’ swimsuit. He says the measures are key to preventing Muslims ‘causing fear, alarm and shock among the locals’.
There is no doubt that millions of his fellow countrymen share his distaste for migrants. The most obvious manifestation of this is the forbidding wire fence — dubbed the new ‘Iron Curtain’ by some — that now stretches 110 miles along the border with Serbia.”

‘It is very important for the village to preserve its traditions. We can see large Muslim communities in western Europe that haven’t been able to integrate — and we don’t want to have the same experience here.’

The following video is a Custodela Club interview with Toroczkai explaining the new wire fence and the current situation at the gate of the European Union.

More Sanctuary Cities Caving to Threats of Defunding by Feds

Even After Valentine's Day: Fight For Our Marriage