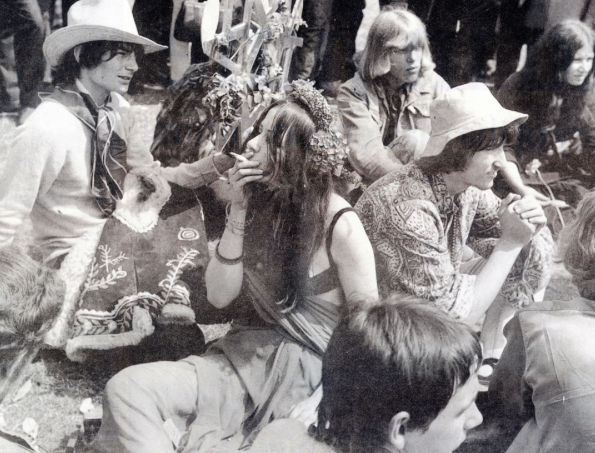 Americans love nostalgia. We love to see things and be reminded of our childhood, our teenage years, and all the really dumb things we did in college in lieu of actual studying. We all have that one song that, when we hear it takes us immediately back to who we were then and who we were with.

Anyone who came of age during the turbulent era of the 1960’s will tell you it was a time like no other in American history. The war in Vietnam, Civil Rights, the Hippie counter culture, and young people questioning authority and long held traditions and beliefs made for at times a volatile mix. Those same young people warned each other “never trust anyone over 30”.

Well hang on to your go-go boots and bell bottoms. For Liberals it is 1968 all over again. It is all brought back courtesy of President Donald Trump and Republicans being in charge of the government. For the next four years, with the willing participation of the mainstream media, it will be time to relive those heady marijuana smoke filled days of resisting “the man” all over again.

Republicans and Conservatives should prepare themselves for the next four or eight years. Prepare for the fact that it will be one long protest. Funny how when Democrats are in charge dissent and protest is somehow un-American, but when the GOP runs the show, protest is the highest form of patriotism.

This time around, the protest began almost immediately as Donald Trump was declared the winner of the election. Liberals rambled on about how Trump was somehow unduly elected and that the election had been hacked by the Russians, although there was no proof whatsoever that any actual voting machines had been tampered with. But try telling the Left that. Like Dan Rather clutching what he thinks is proof of George W. Bush’s dodging of his National Guard duties in his bony fingers, they will always believe it.

Several weeks ago, the “Women’s March” took place in Washington D.C. and in many other cities around the nation and the world. The dirty little secret, this was not the “all inclusive” march that was portrayed in the media. Quite the opposite, it was quite apparent that Conservative women were not welcome. Just the opposite, they would have gotten in the way of Liberal women attempting to create 1969 all over again. They demanded equality, equal pay, abortion on demand, and even trotted out an aging Gloria Steinem to help seal the deal.

More recently, the protesters turned their attention to President Trump’s executive order banning immigration from seven predominantly Muslim countries that are known sponsors of terrorism. The Left immediately labeled it a “Muslim Ban” and took to the nation’s airports to protest. For a group of “spontaneous” protesters, they were awfully well organized and prepared.

Now we have President Trump’s Supreme Court nominee. Even before the announcement was made, again protesters gathered outside the Supreme Court with their pre-made signs. All they had to do was plug in a name, and let the protest begin. They will make the same accusations of Judge Neil Gorsuch as they do every Conservative, racist, sexist, bigoted, homophobe. It is the playbook of the Left and can be counted on to be used every time.

Were the protesters of the 60’s bought and paid for like so many of today? Possibly, the same suspects show up today as did back in the day, The Communist Party of America, the Che Guevara types, the anarchists, the Black Panthers all make their presences known. But today, with help from people like George Soros, today’s protesters have some big money behind them, and they will keep going, opposing anything a Republican administration does, especially one headed up by Donald Trump.

So we may as well get used to the smell of patchouli oil and pot smoke, the sound of drumming circles and people dressed as body parts. If you listen closely you will hear the anti-war, anti-establishment songs that make liberals long for those care free, no job, sleep until noon, and protest everything days of the 60’s. Just like their “buddy” Richard Nixon, they are tanned, rested, and ready.

Refugees and Asylum Seekers Are Walking from the U.S. to Canada in the Freezing Cold