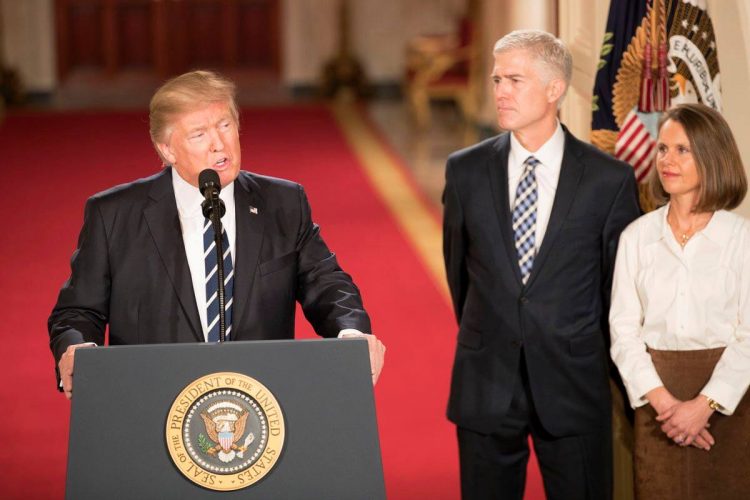 President Trump has been making ‘good’ on most his campaign promises since he’s been in office and his Supreme Court selection, Neil Gorsuch, is another ‘slam dunk’ among Conservatives.

During the election, Trump promised to appoint a Conservative judge to the Supreme Court if he was elected. He also released a list of potential judges eight months before his inauguration, which helped reassure hesitant voters, and deliver a large number of his winning votes on Election Day.

As the Washington Examiner explains:

“It’s hard to overstate the role that this Supreme Court vacancy had in the polling booths last fall. With continuing religious liberty cases and growing momentum to revisit significant questions before a divided court, the replacement to Scalia could not be more significant. Senate Republicans rightly held off on a Supreme Court nomination in the midst of a presidential election, and for many in both parties the election was a referendum on the Supreme Court.”

Now President Trump not only makes good on his campaign promise, but also aptly fulfills his pledge to choose someone “in the mold of Justice Scalia.”

“The comparisons between the two men are numerous. Both are originalists, with proper respect for the Constitution as originally written. As Gorsuch put it (in Cordova v. City of Albuquerque), the Constitution “isn’t some inkblot on which litigants may project their hopes and dreams…, but a carefully drafted text judges are charged with applying according to its original public meaning.”

Gorsuch’s career is full of decisions in accord with Scalia’s opinions on religious liberty, the Second Amendment, criminal laws, and the commerce clause. To the delight of law students everywhere, Gorsuch’s legal writing is even likened to Scalia: His decisions are both clear and powerful.

While his high-profile decisions in favor of Hobby Lobby and the Little Sisters of the Poor should rightfully encourage constitutionalists, Gorsuch’s opinion in the less prominent Gutierrez-Brizuela v. Lynch is equally encouraging for those in favor of limited government. In it, Gorsuch takes on the “Chevron doctrine,” a precedent that defers to federal agencies’ interpretations of their own responsibilities. A true dismantling of the administrative state will require support from all three branches, and Gorsuch’s eloquent attack on bureaucracies provides impressive judicial analysis.”

At the age of 49, Neil Gorsuch is the youngest nominee in 25 years. He is also a spectacular selection for the Supreme Court, and an fine successor to Justice Antonin Scalia.

While several Democrats have already threatened to filibuster any of Trump’s nominee picks, Republicans are very confident that Gorsush will eventually be confirmed.

The War Our Sons (and Daughters) Now Face on College Campuses