Europe has many fine traditions. Its newest tradition is the burning car. Why burn cars? Because, as George Mallory once said of mountains, they’re there. There are lots of cars around and if you’re a member of a perpetually unemployed tribe that wandered up north and forages on social services, you might as well do something to pass the time. 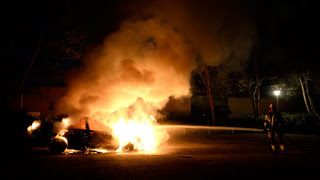 Burning houses is a lot of work and house fires spread. Car fires are simpler. In a welfare state
everyone has houses but not everyone has cars. Burning cars is a way to stick it to those who work for a living. It’s also a way to drive off the members of the sickly Swedish tribe and claim the area for your own. And it’s also fun.

Either you have a plan for buying a car or for burning a car. Considering the Muslim unemployment rates in Sweden, France and everywhere else, it’s safe to say the car burners don’t have future plans that involve saving up for a car or taking out a loan for a car or finding work. Cars are things that they steal, either the usual way or by defrauding social services. They might get a car by dealing drugs, but those cars are disposable. One day they’ll have to burn them anyway.

If you’re the product of an industrialized culture, then you think of a car as a product of work. You realize that it’s the product of countless raw materials, that the metals had to be dug out of the earth, that the machines that make it had to be assembled and that men had to stand around putting that into place. And you might be one of those men. And if you aren’t, then you might know someone who is.

But if you come from a pre-industrial culture which may have factories, PhDs and cars, but no sense of the connection between product, innovation and effort, then why not burn a car or a city? Things fall into the category of that which you and your family own… and that which they do not. Anything in the latter category may be stolen or vandalized because it has no value.

The notion of a painting in a museum or a scientific principle or an eagle soaring over a lake having value is an abstract notion to you. Value to you is your own identity. A painting is valuable if you own it. If it sits in a museum, then you can either steal it or burn down the museum. The principle is worthless unless you can cash in on it. The eagle is worthless unless you can kill it or identify with it.

Some people would call that savagery, but that sort of talk is politically incorrect. And we all know that there are no such things as savages. The true savages are the people who use scientific principles to make cars and then use the money to commission paintings of soaring eagles for museums because they are greedy exploiters of the planet. On the other hand, the noble savages whose herds of sheep and goats turn fertile land into desert, who burned the great libraries of civilization and who believe that the hair of women emits rays that passing airplanes have to be protected from are close to nature.

A car is just a metaphor. You drive it to work because you work somewhere. You drive it on family vacations because you don’t get to spend enough time with your family because you and they are all doing things. You’re not sitting around your house with your two wives and eleven kids plotting new ways to scam social services. You go places because you’re still the product of a culture that likes the idea of new frontiers. Your car isn’t exactly Columbus’ flagship, but it takes you places. It’s a sign of progress. That’s why you own cars, instead of burning them. 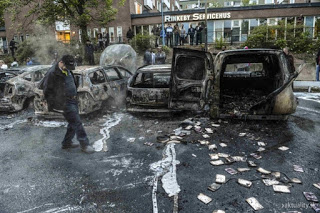 That’s just as true of a lot of the second and third generation immigrants who are no more Swedes than the South Africans became Africans or the English settlers of the American Colonies became Indians. They may own iPhones, dye their hair and listen to the same music that you do, but they often don’t have the same assumptions. They bought the product, but not the process. They can drive cars and when they get bored, they can burn them, because they aren’t their cars. They’re your cars.

And the hair dye and the music and the democratic elections aren’t theirs either. Those are things they took from you and if they get bored with them, they’ll put on Hijabs, ban music and go back to tyranny, because what they have is a product, not a process. They walked into the movie in the middle and they like some of it, but it’s confusing and they don’t understand why the hero doesn’t just shoot the villain in the head, take his woman and then raise a dozen children in his lair.

After the riots die down and the fires are put out, there will be more talk about integrating them, but what are they being integrated into; a culture that doesn’t resist when their cars are torched? Why would they want to join a culture that leaves you unable to protect what is yours? Why would anyone join a culture that makes you so weak and impotent that anyone can come and take what belongs to you?

It’s a movie that makes sense if you were there back in the 19th, but not if you suddenly walked in around 1965 or 1995. It’s the outcome of a historical process that is hard to explain to people who were never part of the process. They know how the story came out, but not why it matters. And even if they could, their priorities are different. They didn’t come here to meld into some gelatinous brotherhood of man but to make life better for their clans.

Most people plan for the future, they just do it in different ways. In Sweden, they plan to buy a car. In Iraq or Somalia, they plan to have eight kids. In Sweden, there isn’t supposed to be a biological tribe anymore. Everyone is meant to belong to the progressive transnational tribe which lets you have the good things in life so long as you make some kind of vague commitment to pay more and share them with others. But the savages of Stockholm already have a tribe. And their tribe isn’t big on sharing and is a lot more useful in a tight spot.

While the Swedes save up for cars, the Iraqis scam social services for their eight kids. And the demographics suggest that eight kids and no cars beats two cars and one child. Keep multiplying those numbers and the future will have fewer Swedes and fewer cars and a lot more bored Iraqi kids running through what used to be genteel suburbs looking for Swedes or cars to burn. 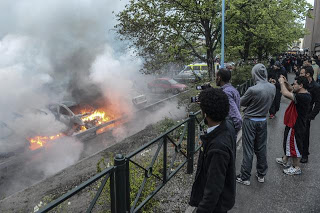 The Western ideal has been reduced to a personal technocratic utopia built on efficiency and it has collided in the night with an Eastern ideal of the clan and a theocratic utopia built on total purity. That is the kind of conflict that the creed of good fences for good neighbors was meant for, but there are no fences tall enough to work it out within a single nation.

Both West and East have their own processes. And both processes are colliding. The Swedes bring their cars and the savages bring their flames. The burning cars are a metaphor for the impact of Muslim immigration on Sweden and the West.