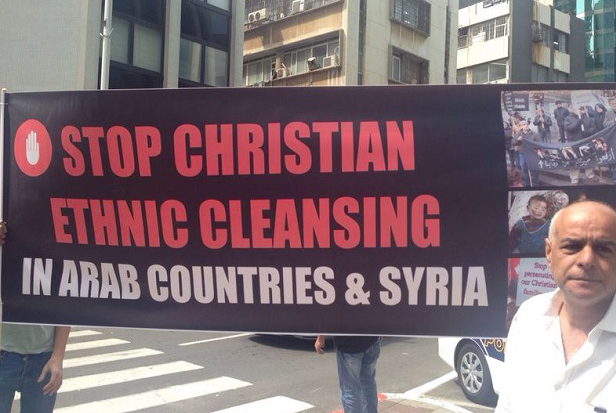 The President of the United States announced that refugees fleeing persecution by a totalitarian regime would be deported. It did not matter that they had risked their lives to come here.

They would be sent back.

No leftist lawyers crammed airports. No protesters chanted at terminals. No celebrities offered sanctimonious lectures about “who we are”. No one dared to call the lying thug behind it un-American.

Because his last name was Obama and the refugees were Cubans fleeing socialism.

Their arrival irritated the leftists gleefully going on tours of Havana while worrying that capitalism would ruin all the poverty, misery and oppression they were showing off on their Instagram pages.

So the left wanted to keep them out of America.

The media outlets selling sniveling sob stories of Muslim families cheered when President Clinton sent in an anti-terrorist unit brandishing submachine guns to abduct a little Cuban boy at gunpoint from his family. “We literally wanted these people frozen with fear,” a BORTAC commander boasted.

That is how the left treats actual refugees.

When they lecture us on “who we are,” remember that this is who they are.

Christians made up 10% of the population of Syria. Two thirds of Syrian Christians were displaced by the ongoing Muslim religious war. But only 1% of the Syrian refugees admitted by Obama were Christian.

Of the hundreds of thousands of displaced Syrian Christians, Obama took in 125 in his final year.

While real refugees were kept out, Obama threw open the doors to Sunni Muslim migrants: many of whom sympathize with their Sunni Islamic terrorist side from Al Qaeda to ISIS. Obama had armed and aided the Sunni Islamic “freedom fighters” in Syria who were oppressing and displacing Christians.

These are the fake refugees on whose behalf the left is protesting at airports.

The left does not support actual refugees because the majority of those are fleeing either leftist or Islamist regimes. And the left is the unofficial lobby for the former and supports the latter.

Joe Biden, Jerry Brown and other leftists fought tooth and nail against bringing Vietnamese and Cambodian refugees to America. George McGovern insisted that they “would be better off going back to their own land.”

Amnesty International, which beats the Muslim refugee drum louder than anyone else, joined in the effort to cover up Communist genocide in Cambodia. “Allegations made by refugees must be examined with care in view of their possible partiality,” the left-wing organization warned. It claimed that it did not want to “embarrass” the Communist mass murderers by exposing their misdeeds in public.

Cambodian genocide denial lived on until the bodies could no longer be covered up.

The left has shamelessly invoked the plight of Jewish refugees from the USSR and Nazi Germany.

It was FDR, the great hero of the left, who sent Jewish refugees to die in Nazi concentration camps. While leftists like to place the blame on Congress, the FDR administration went to great lengths to keep out even those Jewish refugees that could have been legally admitted with security reviews.

The FDR administration even pressured other countries in the region not to accept Jews.

FDR had a long history of anti-Semitic remarks. He had even defended Nazi anti-Semitism in private conversations. The most horrifying of his remarks came when Stalin and FDR were discussing the “Jewish problem”. Stalin had already been engaged in massacring the Jews. FDR quipped to Stalin that he would give the six million Jews of the United States to King Ibn Saud of Saudi Arabia.

Meanwhile the left had spent a long time denying that Jews were even persecuted in the USSR.

Nixon’s Attorney General, John Mitchell, had intervened to offer parole to Soviet Jewish refugees while Carter had sought to suspend Jackson-Vanik which was forcing the USSR to free Soviet Jews.

It is the left that stands on the side of the leftist anti-Semites who oppress and persecute Jews.

When the Marxist Sandinistas persecuted Jews, they were the toast of the left. John Kerry lobbied for them and Bill de Blasio supported them. But President Reagan courageously denounced them.

Who cared about those Jewish exiles? Reagan. Not the left which glorified the Marxists scribbling, ‘Death to the Jewish pigs’ on synagogue walls.

Today the left is doing the same thing to Christian refugees that it did to Jewish refugees.

Obama’s people fought hard to prevent the Boko Haram terrorists who were massacring thousands of Christians and bombing churches in Nigeria from being named as a foreign terrorist organization. He sided with the Muslim Brotherhood church bombers in Egypt and with Palestinian Authority Jihadists killing Jews in Israel.

Everything Obama did is the policy of the left. Not just in America, but also in Europe and in Canada.

The left has formed an alliance with Islamic terrorists. Some of the lawyers who rush to airports to aid Muslims detained on immigration charges also rush to prisons to help Muslim terrorists detained in plots to massacre Americans. They don’t love refugees. They hate America. They hate us.

Cuban and Soviet Jewish refugees voted for Trump because they know what it’s like to live under the left. The Christian refugees fleeing the Middle East are the first to warn about the dangers of Islam.

That’s why the left will do everything it can to keep them out of this country. There is nothing that a totalitarian movement hates and fears more than people who love freedom.

Behind the moral theater of the editorial page and the sanctimonious circus at the airport is a horrific crime. The left has aided and abetted genocide from the USSR to Nazi Germany, from Asia to the Middle East, while providing aid and comfort to the monsters behind these horrors. The greatest intellectuals of the left defended the horrific crimes of Communism as they whitewash Islamist crimes today.

Leftists are really protesting at airports for the continuation of Obama’s Christian refugee ban. They are screaming their lungs out to keep the Christian refugees fleeing Islamic terror out of this country.

The left hasn’t turned out in force to save Muslims. It has marshaled its haters to kill Christian refugees.