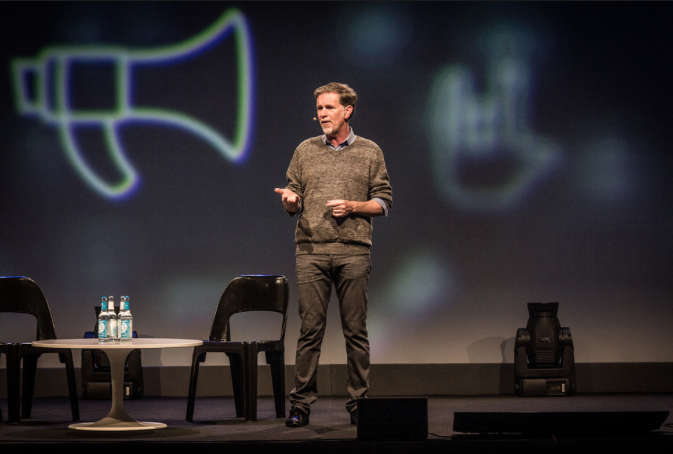 The revolution will not be brought to you by Xerox. It will be brought to you by BMW. The German luxury automaker is a key advertiser at GQ. And GQ is the headquarters of the Resistance. That’s a vlog by Keith Olbermann who returned from his exile at an ESPN Elba to denounce Trump.

“I am Keith Olbermann,” Keith Olbermann barks to the peasants and workers of GQ who are taking a break from reading an article on ‘$100 Cologne that Smells Like Nothing’, “This is the Resistance.”

When the underground isn’t at GQ (The Most Radical Dress Socks to Wear Right Now), it’s at Vanity Fair where Graydon Carter denounces Trump (Donald Trump: A Pillar of Ignorance and Certitude) right above a photo of himself taken by Annie Leibovitz smiling smugly from his skyscraper office.

Maybe the resistance is Reed Hastings, the billionaire CEO of Netflix, who used his wealth catering to the tastes of urban elites, to lobby to raise the taxes of the middle class. Hastings whined that President Trump’s moves to protect Americans were “so un-American it pains us all.”

Who are this ‘us’? It might be Warren Buffett, Google’s Eric Schmidt and Facebook’s Sheryl Sandberg, with whom Hastings had joined to support Hillary Clinton. Or it might be the CEOs of Lyft, Airbnb and Twitter, to name a few, who have jointed the anti-Trump resistance of wealthy elites.

It’s no coincidence that the most vocal outcry against President Trump’s measures have come from urban elites and the corporations that cater to them. It’s easy to spot the class divides in the scoffing at Andrew Puzder, CEO of the company behind Carl’s Jr. and Hardee’s, getting a cabinet position instead of Facebook’s Sheryl Sandberg who had been tipped for Treasury Secretary by Hillary.

Carl’s Jr and its 4 Dollar Real Deal are a world away from Facebook’s Gehry designed Menlo Park headquarters. Or as a WWE tournament is from Conde Nast’s Manhattan skyscraper.

It’s hard to imagine a clearer contrast between coastal elites and the heartland, and between the new economy and the old. On the one side are the glittering cities where workforces of minorities and immigrants do the dirty work behind the slick logos and buzzwords of the new economy. On the other are Rust Belt communities and Southern towns who actually used to make things.

Facebook’s top tier geniuses enjoy the services of an executive chef, treadmill workstations and a bike repair shop walled off from East Palo Alto’s Latino population and the crime and gang violence. And who works in Facebook’s 11 restaurants or actually repairs the bikes in the back room? Or looks through the millions of pictures posted on timelines to screen out spam, pornography and racism?

Behind the illusion of a shiny new future are Mexicans getting paid a few dollars an hour to decide if that Italian Renaissance painting you just shared violates Facebook’s content guidelines.

If you live in the world of Facebook, Lyft, Netflix and Airbnb, crowding into airports shouting, “No Borders, No Nations, Stop The Deportations” makes sense. You don’t live in a country. You live in one of a number of interchangeable megacities or their bedroom communities. Patriotism is a foreign concept. You have no more attachment to America than you do to Friendster or MySpace. The nation state is an outdated system of social organization that is being replaced by more efficient systems of global governance. The only reason anyone would cling to nations or borders is racism.

The demographic most opposed to President Trump is not a racial minority, but a cultural elite.

This isn’t a revolution. The revolutions happened in June in the UK and in November in the US. Brexit and Trump were revolutions. The protests against them are a reaction.

Somewhere along the way the political projects of the left ceased to be revolutionary. The left won. It took control of nations and set about dismantling them. Its social and economic agendas became law. It ruled through a vast interconnected system of the bureaucracy, media, academia, non-profits and corporations. In Europe, democracy nearly vanished. In America, there were still elections, but they didn’t matter very much. A Republican president could tinker a little, but he couldn’t change things. The left would throw its ritualistic tantrums if he limited abortion funding or invaded Iraq. But around the isolated controversies, everything else would go on moving further to the left.

The left had come to envision its victory as inevitable. Its leaders enjoyed the divine right of kings bestowed on them by historical materialism. And so they couldn’t see the revolution coming.

The inevitable elites and their power were overthrown. The little people they had been stepping on stormed the castle. All their pseudoscience had failed to predict it. Suddenly the future no longer belonged to the City or to Palo Alto. And its denizens poured out into the streets to protest.

The protests are taking place in the name of oppressed minorities, but like any dot com logo, that’s branding. They are actually an angry reaction by an overthrown elite to a people’s revolution.

This isn’t really about Muslims. The angry protesters know as little about Islam as they do about rural Iowa. But borders and airports are an important metaphor. President Trump said, “A nation without borders is not a nation.” And that’s exactly what the left wanted. No borders and no nations.

If you make tangible goods or have a mortgage, you are more likely to want borders and a nation. If on the other hand you deal largely in intangibles, in information, in strings of numbers, in data on global servers and financial transactions around the world, in movies and music, in ideas, then borders are an unreal abstraction. If you get your rides from Uber, your house from Airbnb, your entertainment from Netflix and your dates from Tinder, if you don’t actually own anything, and have no plans for a family or anything more permanent than a virtual existence, who needs a nation?

Patriotism is an ideal grounded in real things. Our elites exist in an unreal world filled with unreal things. Their world is based on rapid communications that organizes the world in new ways. They have grown so dazzled by the potential of that organization that they ignore what is underneath.

That metaphor became reality with Brexit and Trump. The country rebelled against the city. People who were in the business of making and doing real things rose up against a virtual economy.

The elites are unable to understand the nationalistic and territorial impulses of either their own citizens or Islamic terrorists. Their strange social-plutocratic fusion of Marxism and technocracy sees it as a problem of sharing the wealth. All the popular uprisings can be put down with a bigger welfare state. Redistribute more of the profits from Facebook to Muslims and Trump voters. Problem solved.

But the problem can’t be solved by enlarging the welfare class. It’s a gaping cultural chasm.

People need meaning. It is meaning that gives them a sense of worth. The angry leftist reactionaries find meaning in their post-everything world. The shattering of this world has driven them into the streets. And yet they can’t grasp that it was the shattering of their world that drove so many working people to vote for Brexit or Trump. They refuse to comprehend that nations have meaning to more people than their post-national world order of interchangeable multicultural megacities does or that most people want something tangible to hold on to even if it requires labor and sacrifice.

It was a war between Davos, Conde Nast, GQ, Soros, MSNBC, Hollywood, Facebook and America. And America won.

The “resistance” is a collection of elites, from actors at award shows to fashion magazines to tech billionaires, decrying a popular revolt against their rule. They are not the resistance. They are dictators in exile. They had their chance to impose their vision on the people. And they lost.