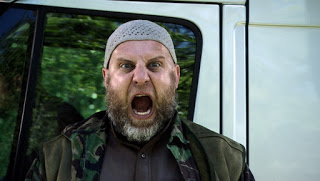 The Connecticut Democrat was joining a chorus of the clueless warning us that if we don’t let
Muslims into America, they’ll join ISIS and kill us.

Singing their brains out in the same stupid chorus were Senator McCain and Senator Graham (“a self-inflicted wound in the fight against terrorism”), Senator Ben Sasse (“the terrorist recruiters win by telling kids that America is banning Muslims”) and Senator Heitkamp (“confirms the lie terrorists tell their recruits: that America is waging a war on Islam.”)

Senator Cardin went one better by whining that keeping potential Islamic terrorists out, “promises to make the U.S. less safe and places our courageous servicemen and women in even greater danger as they fight against terrorism.” Just tell it to the Marines shot and killed by a Muslim immigrant at a Chattanooga recruiting station and Naval reserve center.

There’s only one problem with this hostage crisis theory of immigration. It’s insane.

If they’ll go off and join ISIS if we don’t let them in, what happens when we do let them in?

Why would we want to take in people who express their disagreement with our politics by shooting up a gay nightclub or a social service center that helps the developmentally disabled?

When normal people don’t like a policy, they protest or write a letter to the editor. They don’t plant a pressure cooker bomb next to a little boy or stab college students with a butcher knife.

“Let us in or we’ll kill you” is the least compelling immigration argument ever.

We have our current wave of terror despite legalizing some 100,000 Muslims a year. If we don’t manage 100,000 this year, they are saying that maybe more of the 100,000 from a few years ago will join ISIS and start killing us. And if we don’t legalize 100,000 five years from now, the 100,000 coming into the country this year will become the terrorists of tomorrow.

That’s not an immigration policy. It’s a hostage crisis.

But let’s take one big step back.

ISIS recruitment has nothing to do with our immigration policy. Unless the world’s greatest ISIS recruiter was Obama.

ISIS had zero recruitment problems under Obama. There was no shortage of Muslims lining up to run over, rape, behead, bomb and mutilate non-Muslims even when his refugee policies bent over backward to favor Muslims. Instead that’s when “lone wolf terrorism” by ISIS supporters, some of whom had come here as first or generation refugees, took off.

At the height of Obama’s pro-Islamist policy, ISIS was picking up 2,000 new recruits a month. Even as he rolled out a plan to fight ISIS with aggressive tweeting, the Islamic State gained tens of thousands of recruits. There were investigations of ISIS sympathizers in every state and hundreds of Muslim settlers in America had traveled to join ISIS. Others carried out terror attacks here.

Since none of this could be Obama’s fault, the media took to blaming random people who might make Muslims hate us. A guy who posted a YouTube video was blamed for a Muslim terror assault on our diplomatic compound in Benghazi. Hillary Clinton saw to it that he went to jail. A pastor who planned to burn the Koran got a phone call from the commander of United States Central Command. Supreme Court Justice Stephen Breyer suggested that burning the Koran might not be protected by the Constitution. Assistant Attorney General Thomas Perez refused to rule out blasphemy laws.

None of this shameless unconstitutional pandering to terrorists stopped or even slowed down the tide of Muslim terror attacks. No ISIS recruit lifted a sword and then refused to behead a crying Kurdish teenager because Obama offered Muslims an incredibly generous refugee policy.

Instead Islamic terror got worse.

The same was true in Europe. ISIS had no difficulty finding recruits despite the generous migration policies of the European Union. Germany opened the doors to Muslims and suffered a series of devastating Islamic terrorist attacks. After a million refugees, ISIS still had no trouble finding recruits. Some of these recruits were the very refugees Germany had taken in.

Just as taking in large numbers of Muslims filled our country with potential ISIS recruits.

ISIS recruitment numbers fell for reasons having nothing to do with our immigration policy. Muslims stopped joining the Islamic State because it was losing.

If we really want to cut down on ISIS recruitment, the best way to do that is by beating Islamic terrorists. Leftists argued that our presence in Iraq was feeding Al Qaeda recruitment. So Obama pulled out. And Al Qaeda in Iraq turned into the Islamic State and became its own country. It went from a small group of terrorists to fielding an entire army. Obama’s pullout from Iraq allowed ISIS recruiters to build a country and an army.

Appeasing Islamic terrorists doesn’t work. It has never worked. And it will never work.

If keeping Muslim migrants out of America will make them kill us, why would we let them in?

Flynn, Trump, and Countering The Four Horsemen of the Liberal Apocalypse