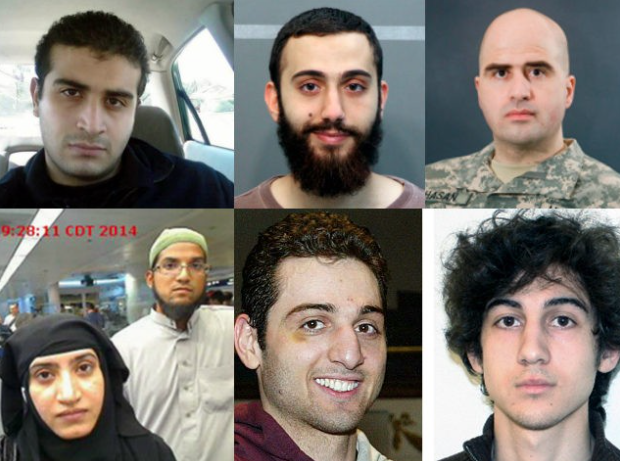 The Nonimmigrant Visa application form filled out by the 9/11 hijackers asked, “Are you a member or representative of a terrorist organization?” They checked the box that said, ‘No’ and they were in.

The current incarnation of the form asks the same perfunctory and generic question. An actual terrorist is as likely to check the box as he is to finger a rosary while eating a ham sandwich and singing Hava Nagila. But since 9/11, the terrorist threat has evolved from foreign cells penetrating this country to domestic Islamist terrorists emerging out of Muslim settlements already occupying this country.

Most Islamic terrorists that the FBI has been dealing with had no specific terror plans at the time that they entered this country. Some Islamic terrorists, like the Tsarnaev perpetrators of the Boston Marathon bombing, came here as children. Others, like Omar Mateen, the Pulse shooter, and Nidal Hasan, the Fort Hood killer, contrived to be born in this country to foreign parents.

Immigration screening has to do more than just ask terrorists to check a box if they plan to fly planes into our skyscrapers. We must identify visitors and immigrants who are at a high risk of becoming terrorists in the first or second generation. The only way to do this is with a holistic strategy that examines the worldview of new immigrants and the Islamic communities they intend to be part of.

Instead of checking a perfunctory box, it is important to interrogate how a Muslim applicant views his religion and its interaction with the rest of the world. And to examine the mosque he plans to attend.

For example, attendees at the infamous Dar Al-Hijrah mosque in Falls Church, Virginia included Nidal Hasan, its former Imam was Al Qaeda leader Anwar Al-Awlaki, and a number of key figures associated with the mosque were linked to Islamic terrorism. Any Muslim immigrants planning to attend the mosque could be considered at high risk for engaging in terrorism regardless of their stated views. Our current screening methods are laughably crude.

The immigrant visa form asks about engaging in and funding terrorism. It does not however specify what a terrorist group is. Muslims define terrorism differently and do not consider many of the Islamic terror groups listed on the State Department’s Foreign Terrorist Organizations list to be terrorists.

It asks about membership in the “Communist or other totalitarian party” and participation in various Columbian terrorist and militant organizations. Despite the thousands of people killed by Islamic terrorists in this country in the last few decades, it fails to ask anything about specific Islamist groups.

Despite all the assurances about vetting, the forms don’t even bother to ask about membership in Al Qaeda, ISIS, Hamas or their parent organization, the Muslim Brotherhood. The Muslim Brotherhood is to Islamic terrorism what the Communist party was to subversive and terrorist groups during the Cold War.

The Muslim Brotherhood is a totalitarian organization. Its motto is, “Allah is our objective; the Prophet is our leader; the Quran is our law; Jihad is our way; dying in the way of Allah is our highest hope.” This credo reflects the objective of a theocratic Islamic State to be achieved through any means: including violence. Its members have perpetrated and aided Islamic terrorism here and around the world. These include Osama bin Laden, Yasser Arafat and the Brotherhood perpetrators of the genocide in Sudan.

Any Muslim immigrant who had ties to the Brotherhood has falsely answered the question and should be deported. If he falsely answered this question on his naturalization application, he should be subject to denaturalization and deported. Any Muslim who has subsequently become involved with Muslim Brotherhood front groups such as CAIR, ISNA, the MSA and countless others, should be investigated for pre-existing links with the terror network and prevented from becoming a citizen of this country.

Communities where Muslim immigrants propose to settle should be tested for their extremism levels as defined by the preponderance of Muslim Brotherhood institutions. Muslim immigrants who seek out communities under the influence of Brotherhood institutions should be considered at a higher risk of engaging in terrorism either in the first or second generation without regard for their current views.

Our counterterrorism is reactive instead of proactive. Reactive counterterrorism is measured by the time we have to react. When a terrorist opens fire in a shopping mall, reaction time is measured in minutes or seconds. His original descent into Islamic terror plots may go on for months or years. But the closer we get to the source of the problem, the more lead time we have until we are no longer reactive, but proactive. Instead of rushing to stop the next attack, we can transform the entire battlefield.

That must be our objective.

Our biggest problem is that we aren’t asking the right questions. Asking a Muslim if he is a terrorist is the wrong question. Islamic terrorists don’t see themselves as terrorists. They view themselves as devout Muslims. That is how we must see them if we are to find them out and stop them before they strike.

The root cause of Islamic terrorism is the idea that Muslims are superior and non-Muslims are inferior. Exposing this conviction won’t be done with a terrorism check box. Many Muslims who go on to commit acts of terror in the name of Islamic Supremacism have no such plans when they enter the country. They do however believe that there is a primal struggle between Muslims and non-Muslims. It is this belief that they eventually put into practice at some later date by actually engaging in Islamist violence.

Instead of asking them whether they are terrorists, we ought to ask them how they view their participation in American life in light of the Koranic verse that commands Muslims, “O you who believe, do not take the Jews and the Christians for friends. ”And whether they are willing to disavow the message of such terrorist verses of the Koran as, “Do not take friends from them unless they migrate in the Way of Allah. But if they turn away (from Islam), seize them and kill them wherever you find them.”

If they are not willing to disavow calls for the murder of non-Muslims, such as, “I will cast terror into the hearts of non-believers. Therefore strike off their heads”, they present a serious terrorism risk.

Can we really afford to allow Muslim immigrants into the United States who believe that they ought to “fight them until there is no more Fitnah (disbelief: i.e. worshiping others besides Allah) and the religion will all be for Allah”? What better predictor of terror risk could there be than those who believe that they must “kill the non-believers wherever you find them, and capture them and besiege them, and lie in wait for them?” This is the origin of Islamic terrorism. It’s the acid test for every Muslim migrant.

It all comes down to three simple questions.

1. Have you ever had any associations with the Muslim Brotherhood or any of its front groups?

2. Will you commit to avoiding associations with Brotherhood mosques and other entities in this country? Are you aware that you may be deported if you do not?

3. Do you disavow the following verses of the Koran calling for violence against non-Muslims?

Such simple questions are far more relevant than a terrorism check box because they address what terrorists actually believe, not what we believe about them. They will not stop an active terrorist, but asking them will help keep out the terrorists of tomorrow.

They are not the final step. But they are a first step that can easily be taken next.

Milo Yiannopoulos on Tucker Carlson Regarding Violence in Berkeley