The intolerant Liberal, or the left side of the Vinculum love little more than to harass the safe and security minded far right conservatives for being concerned about illegal immigration. The recent election of a man who campaigned largely on his promise to build a contiguous wall along the nation’s southern border has given extreme left a new target, but they had plenty to say before President Trump took office, and they aren’t limited to criticizing his specific plans now. When you boil down their arguments, they basically come around to three essential points: first, that illegal immigrants coming to the US to work don’t really take jobs from Americans, because they’re just doing work that Americans won’t do. Second, they say that illegal immigration doesn’t actually cost Americans money, since many of them pay taxes. And finally, of course, nowadays there’s a swipe at Trump, as the liberals will say the wall is pointless since most illegal immigrants enter by air or sea, “really” – not by crossing the southern border on land.

Naturally, all of these arguments fall flat. We’ll start with the first, an idea once put forth by none other than Senator John McCain, a man we can at least respect for his enormous service to our country during World War II – if not his current day political attitudes. Several years ago, Senator McCain was addressing a gathered crowd on illegal immigration, and claimed that Americans simply would not do the jobs that these foreign workers do, no matter the pay. To illustrate his point, he explicitly offered to compensate any American at a wage of $20 per hour to pick lettuce in the hot Arizona sun all day, and rather smugly concluded his remarks with “you can’t do it, my friends. You CAN’T do it.”

I have to say, it was heartbreaking to hear a war hero so drastically underestimating the grit and determination of American citizens. It was also infuriating for many of the people who heard him. During his speech, several of those in attendance could be heard incredulously shouting “I’ll DO it!” Within days, the Senator’s office was inundated with angry letters, many of which included completed job applications seeking the $20/hour position of lettuce picker. Amusingly, some people took to criticizing the comments by drawing Senator McCain’s face – with green features set in a head of lettuce. Jobs Americans won’t do, indeed. 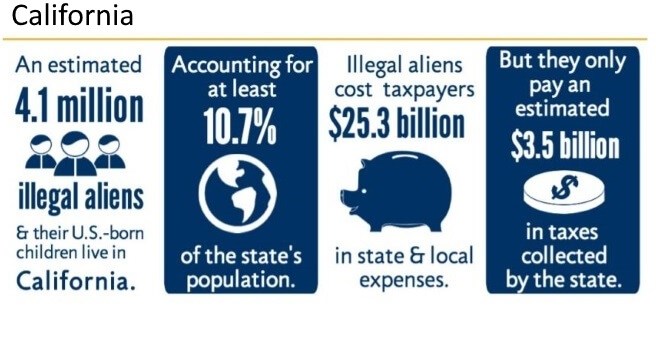 Next we have the “taxpaying illegals” claim. This can be shut down with a few simple facts; we’ll use my home state of California as an example. According to FAIRUS.org, the Golden State tax revenues from illegal immigrants are estimated to clock in at around $3.5 billion annually. Sounds like a lot, but let’s keep going. Because those same immigrants also use an enormously disproportionate amount of social services, including public assistance (and, why do we allow illegal immigrants to receive this, again? But I digress), administration of justice, and general government functions. Crucially, they also consume education resources, which accounts for a whopping 57% of the total taxpayer money spent on this demographic. Altogether, the people of California pay about a $14 billion bill each year for illegal immigrants, with only three and a half billion “returned” in taxes.

Oh, and that $3.5 billion? Let’s remember that illegals are often paid under the table, in cash, and it’s a wonder we get any taxes from them at all. If their jobs were held by legitimate, law-abiding Americans, those revenues would almost certainly be considerably higher.

Here’s a hypothetical scenario: you come home from a long day at work, looking forward to enjoying a nice hot meal, a comfortable place to sit, perhaps a relaxing shower, and many of the other things you’ve earned by virtue of being a responsible, productive member of society. When you walk in, however, you see that a homeless man has broken into your house illegally. He has eaten the food you bought and set aside for dinner. He’s taking a load off in your favorite chair, so you can’t sit there. And he smugly informs you that come tomorrow, he plans to visit your office and have a word with your boss, offering to do your job for a fraction of your current pay. How do you feel?

As shocking and outrageous as this man’s actions are, a compassionate human being feels no hatred for him. It’s important to understand that he’s had a tough time in life, not everyone is as lucky as we are, and ultimately, he’s trying to make it the same as the rest of us are. But he chose the wrong way to go about it. He is an unlawful, illegal immigrant, acting in defiance of the law and of common human respect. You shouldn’t hold animosity for him in your heart – but do you really have an obligation to him?

To many of our far left countrymen, the answer would seem to be “yes”. They have no regard for the notion of securing out national borders, no concept of American sovereignty – and their idea of compassion seems to be utterly destroying oneself in a futile attempt to help the rest of the world. Never mind showing the freeloader the door and changing all the locks so this can’t happen again; these people would have us hand him the deed to the house and become homeless ourselves. Of course, there are far more people like him than there are houses to give, so what we’re supposed to do once we’re ruined and the problem still exists is far from clear.

And that’s the real problem here. It’s not that we don’t want to help poor illegal immigrants from third world countries that come here seeking a better life. It’s that we can’t. We have an immigration system – with caps on how many people we can admit, among other rules – for a reason. America does great work for the poor around the world, both privately and at the government level through charities and foreign aid, but the sad fact is that if we try to help everyone who tries to take from us without even asking, and with no clear plan in mind, we will destroy ourselves – and there will still be people who need help.

Yet those of us on the political right are called heartless villains – and worse – for wanting to secure our borders, for supporting an enforced end to sanctuary cities, and yes, for standing with the President when he puts American Security First and orders a temporary ban on immigrants and refugees from known dangerous countries.

And finally, there’s the predictable attack on Trump himself, impugning the wall because so many immigrants enter the country using other means. Frankly, this argument is just silly; it’s a little like saying that because police officers usually don’t have to shoot anyone while doing their job, they shouldn’t carry guns. No one said that the nation’s southern border is its only source of illegal immigration. It simply is “A” source, and a big one, and so it needs to be addressed. So do many others, and President Trump is hard at work doing everything he can to accomplish that task. He wants to strengthen security across the board, including by temporarily halting immigrants from certain high-risk, terror-prone nations. And there’s a reason that ban is temporary, by the way; his administration plans to use that time to overhaul US immigration law and enforcement completely, making us safer not only by land, but by air and sea as well. No, the border wall won’t solve the entire problem. No one thing will. But a lot of concerted actions, taken together, can.

I can only hope that any left leaning liberals reading this will understand that. I’ve done my best to make it as clear as possible.

Daniel Greenfield: The Left's Persecution of Real Refugees From Islam and Communism