It’s the kind of thing that really should be a no brainer: If you commit a crime, you’re punished; if you later commit another – or, perhaps even worse, the same – crime, you are punished more severely. This is not arbitrary or 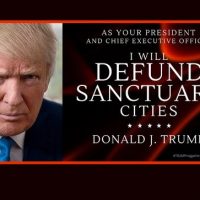 capricious, it’s because you’ve made it clear that you are a hardened criminal who doesn’t care about the law, rather than a misguided person who made a mistake. There is more to fear from a repeat offender than someone having their first run-in with the law. Both may be criminals, but the former case is a graver threat. I think that most ordinary people – the kinds who don’t make their lives about progressive political statements – understand this simple fact.

And yet, when Kate Steinle was murdered in 2015 by an illegal immigrant who had been deported from the country five times and each time returned, there was a shocking lack of support from some political sectors for legislation that would have helped prevent this kind of thing from ever happening again.

Let’s take a moment to understand this scenario. The man who killed Kate Steinle wasn’t supposed to be here. He was in the country illegally, and he had been caught for it in the past. Yet despite multiple deportations, he kept coming back, proving his utter disdain for the rule of law in the nation he so adamantly insisted on living in. Recently, a federal judge stated that San Francisco cannot be held liable for the death of a woman who authorities say was shot and killed by a man who was in the country illegally. Why?

In response, Kate’s Law was proposed, which would have required a mandatory 5 year prison sentence for any person caught in the country unlawfully after having been deported previously. It was roundly opposed by Democrat, and shockingly, many establishment Republicans as well. It seems that some people would do absolutely anything to protect the ability of illegal immigrants to violate our laws and even murder our citizens, rather than risk undermining the frankly treasonous operations of “sanctuary cities” that welcome these criminals.

Fortunately, there is a ray of hope offered by the results of the November elections. Those results suggest what I have always suspected, that most Americans are tired of the wanton disregard and violation of our nation’s immigration law. They’ve had it with sacrificing American sovereignty and American blood on the altar of political correct – not, I hasten to point out, that I have ever understood why harboring criminals in defiance of established law has become the “politically correct” thing to do.

Republicans will soon control the legislative branch of government, and Donald Trump will soon be in the White House. This will give us a President who is notoriously strong on immigration, as well as the Congress he needs to give his policies a shot at being implemented (I say “a shot” because, sadly, I can’t be sure the Republican party will fall in line behind the man who is supposed to be their leader, but I fervently hope they will do the right thing).

Witness the attempts of California Democrats to pass frankly defiant resolutions vowing to oppose any future federal government action on issues President Trump takes seriously, such as illegal immigration. One might hope that Republicans would stand against this resolution out of respect for their President alone. Instead, they’ve remained conspicuously silent on the matter and refused to vote, and sometimes, they have even flagrantly thrown loyalty to the winds and voted in favor of the resolution. Et tu, California GOP?

The political calculus here is obvious, of course. Donald Trump handily won the electoral college nationally, but here in California he lost by over thirty points. State lawmakers are hoping to cling to their legislative power by subtly – and in some cases not so subtly – indicating to voters that they are not on the President’s side, that despite the shared party affiliation they will not be backing his policies. This has been done in a number of ways, and not just with legislation. Recently, the chairman of the California Republican Party chose to appoint a known “Never Trumper” to be Vice Chairman of the CRP – sending a clear message about the organization’s feelings on President elect Trump.

One crucial way to begin in cracking down against illegal immigration and the many dangers it represents is to hold sanctuary cities responsible for the criminal deeds of the immigrants they insist on harboring. This shouldn’t even be a controversy, in my mind, but the court has found that local municipalities who protect illegal immigrants can’t be found liable when those immigrants commit crimes in the district. Why? These cities choose to disregard American immigration law and give safe harbor to criminals; why shouldn’t they take responsibility for the actions of those people who shouldn’t even be here?

We have a real chance to take this country back from people who have no respect for our laws or our sovereignty. Our eyes will be on Donald Trump and the new Republican Congress as they work to make the promises of the campaign trail a reality. I don’t want any more Kate Steinle’s to have their lives taken from them by criminals we have no will to fight. I want America back.