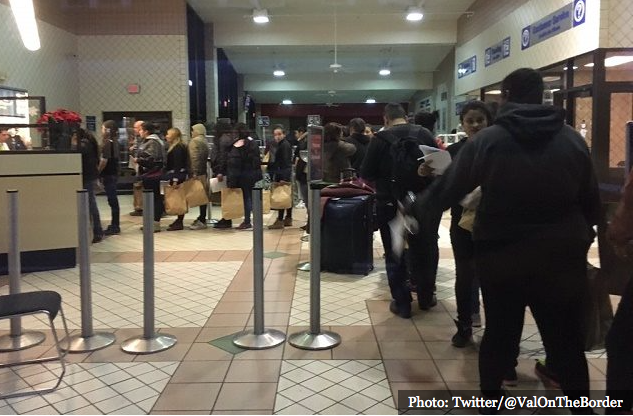 Breitbart Texas is reporting that the Federal Government is dropping off illegal immigrants at bus stops. From Breitbart:

Bus station employees are reporting that illegal immigrants continue pour into the Texas border town of Laredo. They have seen a holding center for Immigration and Customs Enforcement (ICE) carrying between 20 and 40 undocumented women during at least five bus trips.

The local NBC affiliate, 8KGNS-TV first heard that 400 migrants were headed to the border city but it has been difficult to get a concrete number of released individuals from the agency. Officials report that these women meet certain release eligibility requirements set by the federal government.

Local officials say that federal representatives did not notify anyone in the City of Laredo, and that a similar problem was created in 2014 when there was a surge of Central Americans in the Texas border town.

What is adding to the flood of migrants crossing the border from Central America is the fact that some countries are refusing to repatriate their own.

Breitbart Texas reported in late October that illegal immigrants, mostly from Central America, were flooding across the southern border in advance of the 2016 presidential election. The numbers reported by patrol agents were at, or above, historic 2014 levels. On October 18, Breitbart Texas reported that a Department of Homeland Security (DHS) report showed that the number of illegal border crossing apprehensions of Family Unit Aliens (FMUA) from Central America and Mexico hit the highest level on record–an all-time high with 77,674 crossings in FY 2016. Unaccompanied Alien Children (UAC) apprehensions were at 59,692, second to the 2014 historic mark of 69,970.

“Cartel connected human smugglers are telling people they need to get across the border now,” U.S. Border Patrol Agent Chris Cabrera told Breitbart Texas in his capacity as president of National Border Patrol Council Local 3307 in October. “When our agents ask the illegal immigrants who have surrendered at the border, they tell us they have been told they have to be here by a certain deadline to qualify for amnesty from Hillary Clinton, or they must come now because Donald Trump will build a wall and they won’t be able to cross.”

Top 10 Most Ridiculous Crimes and Punishment in Iran for 2016