Congressman John Lewis (D-Ga.) is a black Democrat hack who continues to trade on his participation in a civil rights march with Dr. Martin Luther King, Jr. half a century ago.

Lewis recently told NBC News‘ Chuck Todd that President-elect Donald Trump was “not a legitimate president“.  In that interview, Lewis also said that he would not attend President-elect Trump’s swearing-in on Friday, falsely claiming that “[i]t will be the first one that I miss since I’ve been in Congress.”

Rep. John Lewis’ inauguration boycott is as phony as his past cries of racism. 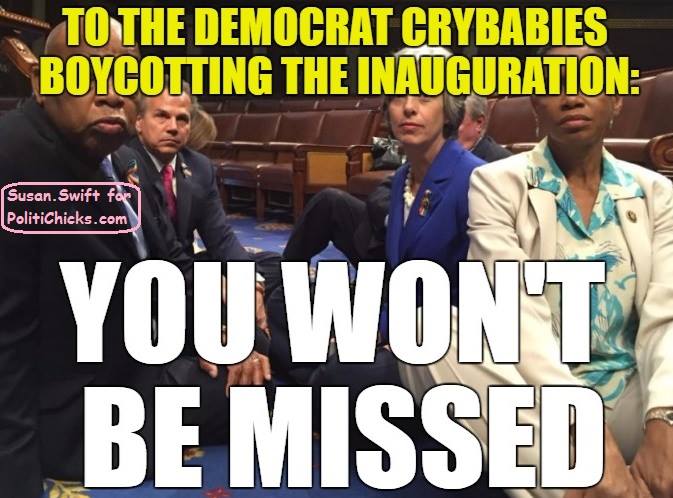 Joel Pollak of Breitbart explains one of Lewis’ schticks is to cry racism against opponents.

Rep. John Lewis (D-GA) is a civil rights hero. He is also one of the most partisan members of the Democratic Party, and frequently accuses his political opponents, falsely, of racism.

Pollak details the top six examples of Lewis’ untrue accusations of racism, including Lewis’ false claim that Tea Party demonstrators said the “N-word” during an anti-Obamacare rally in 2010.

Lewis has coordinated with media to rally a dozen fellow Democrats to nobly “protest” Trump’s inauguration by absenting themselves from the proceedings.  NBC is dutifully helping bring media attention to these spoiled political brats.  This hustle is nothing new.

Citing a Washington Post article, National Review points out that Lewis’ boycott-the-illegitimate-president is a copy-cat phony routine from 2001: “Lewis and other members of the Black Caucus boycotted George W. Bush’s inauguration [then] because they didn’t ‘believe Bush [was] the true elected president.’ “

Just like crying racism falsely to get media attention, Lewis is repeating his Boycott Bush routine in time for the Trump Inauguration.

At least one Nervous Nelly in the Republican party, Senator Ben Sasse, is taking Lewis’ bait by publicly begging these defeated, unprofessional agitators to come to the ceremony.

To John Lewis, one of my heroes:

Please come to the Inauguration. It isn't about a man. It is a celebration of peaceful transfer of power.

Senator Sasse should take a page out of Mason Weaver’s playbook.  Mason Weaver is an author and former member of the Black Panther movement who called Lewis an “illegitimate Congressman.”   Appearing on Tucker Carlson’s show at Fox News, Weaver described Lewis as a “Civil Rights turncoat” who has “collaborated with the Democratic Party to oppress black America.”

Message to Ben Sasse and other Republican ‘Fraidy Cats:  You are being played by Lewis and the media.  There is truly nothing to see here.  Keep calm and move along.  Enjoy your victory and start acting like you are the party in charge.  Push back against these media propaganda ministers and political hacks or they will troll you every day for the next four years.