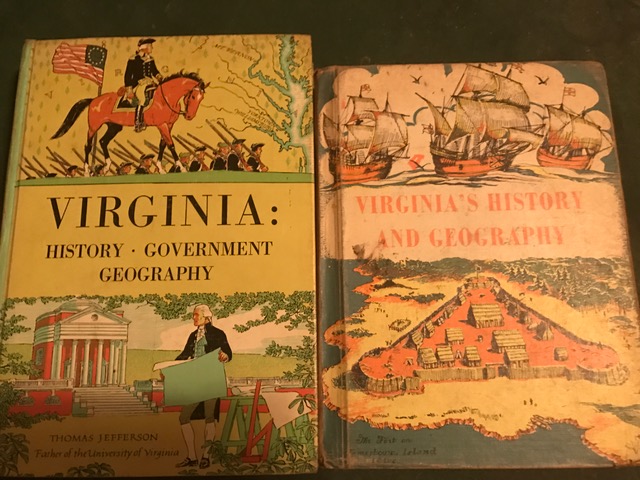 Educators in Virginia back in the 50’s and 60’s should remember well that we had an example of Common Core enforced by the state for fifteen years. It was an example of what happens when government takes over the writing of history and government textbooks. The story is one I was involved in and should be a warning against letting he Federal Government take control of curriculum in local school systems.

To understand Virginia in the 1940’s and 50’s a description by historian V. O. Key, Jr. in his study of Democrat Party politics in the South summed it up very well. We were described as “the state with the most thorough control by an oligarchy.” While most Virginians alternated between the use of the term “organization” or “machine” for those who ran the state it was accepted that the dominant figure was U. S. Senator Harry F. Byrd, Sr. The organization had the ability to keep a tight rein on the government through strong courthouse control and a poll tax.

After World War II those in the organization became concerned about what they considered the erosion of the social order and the control they might lose over the people. Postwar industrialization brought many young business and professional families from the North. Virginia cities were the recipients of expatriate Yankees and a tide of migrants from farms to cities within the state. These newcomers were regarded as outsiders and not connected with established Democratic Party leaders who ran the state and individual counties. The newcomers sought other outlets to gain status. They involved themselves in service organizations, PTAs and political groups that opposed the Byrd Organization, or Machine as it related to them. A Republican Party which had not been relevant since Reconstruction began a new growth.

The Democrat run organization was so concerned that the State Senate offered a resolution in February of 1948 by senate leaders Garland Gray and L. C. Bird. The resolution called for a creation of a commission, to be overseen by the state government, that would write history books to educate young Virginians as to their history and heritage. On the surface this may seem like government trying to improve educational standards, however this would eventually lead to a one sided version of the Virginia story. In the 1950 session of the Virginia General Assembly guidelines were established that t commission would see that “suitable texts” were written. The commission would “employ persons to to prepare the texts” and from time to time “review the manuscripts.”

The most important figure was the commission’s chairman, Cecil W. Taylor, a Democrat leading member of the Virginia House of Delegates and close to the organization’s leadership. During Taylor’s time as chairman he admits he “did most of the writing for the commission” and considered the project of writing textbooks: “my projects.”

The State Board of Education, by law, was responsible for selecting textbooks and allowing local school systems to form committees of teachers and parents to make the final selection from the state’s approved list. This was negated by special legislation that that guaranteed that the board would adopt the product put together by the commission. Local School systems would have no options other thatn the commission’s books.

The commission carefully screened 90 publishers before settling on Charles Scribner’s Sons and Harper and Brothers. Authors used were to be approved by the Commission and accepted in regard to their readiness “to cooperate in such particulars as submission of manuscripts.” The authors had to agree to “revise by inclusion, amplification, or elimination any part of the manuscript if and when requested by the commission.” Up front it was expected that it be shown that slavery was justifiable and in point of fact was a “guaranteed social security” as slaves were provided “free food and housing.” The textbooks were to be for grades 4, 7 and 11. Before publishing the state attorney general, J. Lindsay Almond, a leader in the organization, received the books for “review and recommendations.” Almond went on to be elected governor and was a leader in the program of massive resistance against integration.

All three of the textbooks were designed to stress “gracious living Virginia style.” The fourth grade text dealt mainly with early Virginia and Mount Vernon was used as an example of how all Virginian’s lived. Only two women are mentioned in the book, Queen Elizabeth and Pocahontas. Women in fact are given little priority and recognition in the three books. The seventh grade book covered the Civil War or as it was called The War Between The States and the main women mentioned were two nurses who took care of wounded Confederate soldiers.

I was made familiar with the seventh grade text as it was my first year of teaching and it was the first year the book was adopted. As a history major I found I would need to use other sources as slaves were referred to as servants and depicted for the most part as happy and carefree. It was one of the things that led to my later writing a dissertation on how these books came about for my doctor’s degree. One former commission member admitted to me that the goal of the seventh grade book was to “make every seventh-grader aspire to the colonnaded mansion; and if he can’t get there, make him happy in the cabin.” One of the authors informed me that she was told not to be concerned with exposing myths, that was the job of college teachers.

An author for the high school textbook told me he was forced to put little emphasis on Native Americans and not mention any plights they may have had due to colonial rule. A whole chapter he devoted to them was deleted. He was also forced to “deradicalize Nathaniel Bacon, Thomas Jefferson and Patrick Henry. Any attempt to to humanize Jefferson or relate how he was concerned that slavery would divide the nation would be an attack on the aristocracy. In relation to government there was to be no mention of the Byrd Organization or Machine and no mention of poverty or the poor. The Republican Party was to receive little mention with the exception of Abraham Lincoln who triggered the War Between The States. A Democrat commission member admitted that he personally wrote the government section.

These books were in use for fifteen years and millions of young people were exposed to them. Their only hope of truth we’re those teachers willing to do their own research and to bring their own resource materials into the classroom.

It was not until well into the Civil Rights movement of the 1960’s that the public learned through the news media how the three books were written and how racist, sexist and pro state control they were. It was the growth of the Republican Party that finally forced the Virginia General Assembly to re-examine the work of the textbook commission. The election of the first Republican governor since Reconstruction, Linwood Hilton, that a new state School board took action. January 1972 the textbooks were removed and school systems were free to adopt new ones.

Now there has been a movement for the Federal Government to take over what is taught in our schools and many states adopted Common Core because of the funds offered them. Thankfully the Trump Administration has promised to eradicate this program and the new incoming Secretary of Education is in agreement. When those government written textbooks in Virginia were removed we said hopefully “Never again!” It must be added that Virginia has a beautiful history well worth the study. It does not need a group of bureaucrats with little background to tell us what is true and what is untrue.

I am faced with a real puzzlement because of my research into Virginia’s past. It is something that troubles me about our African American friends who believe they must be loyal to a Democrat party that was responsible for slavery, Jim Crow laws, lynching, segregation and today does not deliver on promises made about benefits and rewards they will get for voting for Democrat politicians. I do think that if our incoming president makes good on his plans we will see more African Americans joining the emerging Black Republican vote we have now.