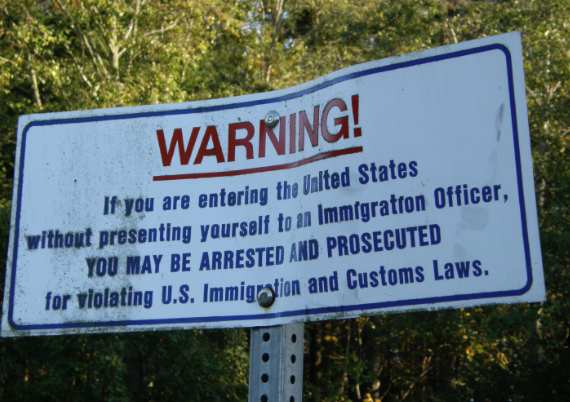 California state and local government officials are literally and figuratively standing in school house doors to block enforcement of Federal law. Interestingly, the last time that happened, the politicians were also Democrats.

Unless you are a liberal, the answer is “Duh.”

Samuel Gompers, founder of the American Federation of Labor [the AFL in AFL-CIO], recognized this:

“Those who favor unrestricted immigration care nothing for the people. They are simply desirous of flooding the country with unskilled as well as skilled labor of other lands for the purpose of breaking down American standards.”

Ronald Reagan said succinctly “a nation without borders is not a nation.”

On September 22, 2016, the National Academies of Sciences, Engineering, and Medicine released a report funded by the pro immigration MacArthur Foundation. Buried in the 495 page report is how much American workers and taxpayers are hurt by legal and illegal immigration.

Not in the report, illegal immigrants cost California taxpayers $25 Billion per year.

The government imports 2 million foreigners every year [not including illegal immigrants] to compete with the 4 million Americans who enter the labor force each year. All net employment gains since 2000 have gone to immigrants. The wages of American workers have flat lined since the 1970s under this immigration deluge. Record numbers of Americans are out of the labor force. The labor force participation rate is lower than any time since the 1970s. 80% of illegal immigrant households receive one more welfare benefits. Every immigrant gets a job and/or welfare benefits.

Interestingly, the same people who want the government to command higher wages for low income workers by raising the minimum wage also want amnesty, open borders and mass immigration to drive down the wages of the same workers.

The politicians who believe otherwise should try to make their case to the American people. The candidate who advocated amnesty for illegal immigrants and told Brazilian bankers in a secret $225,000.00 speech “my dream is a hemispheric common market, with open trade and open borders” lost the election. BTW, that would mean 600 million people could immigrate to America. The party that openly favors amnesty received ~3.5 million fewer votes for Congress than the party that at least claims it wants to secure the border and stop illegal immigration.

Once again the answer is “Duh.”

Justice Louis Brandeis said: “If the government becomes the lawbreaker, it breeds contempt for law; it invites every man to become a law unto himself; it invites anarchy.”

While the Founders are politically out of favor in some quarters, they understood human nature and government and created the longest surviving Constitution and Republic in the world.

“In questions of power, then, let no more be heard of confidence in man, but bind him down from mischief by the chains of the Constitution.” Thomas Jefferson

“There is danger from all men. The only maxim of a free government ought to be to trust no man living with power to endanger the public liberty.” John Adams

When the government is free to break the law, our rights and Republic are not secure. Congresses and Presidents duly elected by the people enacted and signed the current immigration laws. In our constitutional republic, proponents of amnesty have every opportunity to influence members of Congress to enact amnesty and/or to elect new members of Congress who favor amnesty. That they have been unsuccessful, does not justify breaking the law.

Letting government officials pick and chose which laws to follow and which laws to break undermines the rule of law, respect for the law, and quickly leads to anarchy.

The courts have severely limited states enacting laws to aid enforcement of Federal immigration laws, most recently in Arizona v. United States (2012) 132 S.Ct. 2492. The Court struck down most of Arizona’s immigration law designed to help enforce Federal immigration laws. The Court held the Federal government has broad authority to regulate immigration under Congress’ enumerated constitutional power to “establish an uniform Rule of Naturalization.” As to some provisions, the Court found Congress occupied the field meaning “even complementary state regulation is impermissible.” As to other provisions, even designed to enforce Federal immigration laws, the Court found the Arizona law was an “obstacle to the full purposes and objectives of Congress” because removing illegal immigrants is “entrusted to the discretion of the Federal Government.”

The Obama administration only challenged state laws to enforce America’s immigration laws while systematically refusing to enforce those laws. While Dem supporters of illegal immigration celebrated the ruling in Arizona v. United States, what are prospects for California’s laws and policies intended to aid and abet illegal immigrants and hinder enforcing Federal immigration laws when those laws and policies are challenged by new Attorney General Jeff Sessions? As the saying goes, be careful what you wish for because you may get it.

Oh No! The Hollywood Snowflakes Have Melted