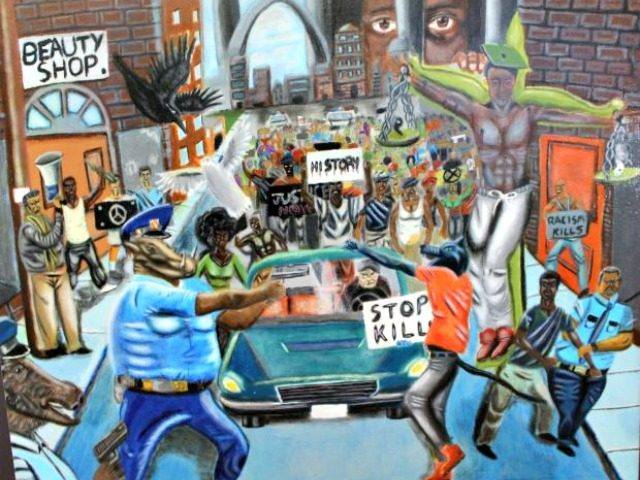 Rep. Duncan Hunter (R-CA) created a firestorm when he removed a student’s controversial painting off the U.S. Capitol walls Friday, which portrays cops as pigs.

Yes, that’s right-a painting that depicts policemen as pigs. And, the Democrats are defending the offensive artwork which degrades our law enforcement officials. How typical.

“He had no right to take that picture down… It’s thievery.”

In a statement, the Congressional Black Caucus also stated:

“The rehanging of this painting for public view represents more than just protecting the rights of a student artist, it is a proud statement in defense of the 1st Amendment to the U.S. Constitution which guarantees freedom of expression to every American.”

A Missouri congressman is even demanding criminal charges against Rep. Duncan Hunter.

“The Capitol Police aren’t going to arrest me for taking down a picture that portrays them as pigs. It just blows my mind that Democrats think it’s OK to portray cops as pigs. It’s a sad commentary on the Democrat Party that the one thing that they’re willing to stand up for in this country is to portray police officers as pigs. Really strange.”

Hunter also said if Democrats put the painting back on the wall, he will reach out to House Speaker Paul Ryan to determine what steps Republicans in Congress can take. “If they put it up, we’re probably going to keep taking it down. I have colleagues on my side now that have been emboldened by my action. And they’re probably going to take steps too.”

Democrats rehung the controversial artwork on Tuesday. So, we’ll see what happens next.

The Democrats are indeed right, that every American is guaranteed the freedom of expression. However, it’s troubling when they don’t at least acknowledge the disturbing message this painting portrays about men and women who put their lives on the line every single day to keep them safe.