The ink was hardly dry on the Secretarial Order from Secretary of the Interior Sally Jewell blaming California’s drought on global warming that rain and snow swept across the state. San Francisco International Airport was forced to cancel flights and there were blizzard warnings for Lake Tahoe. 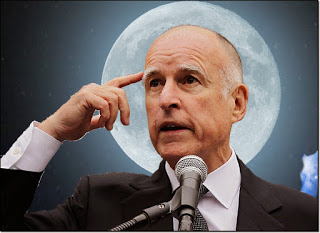 The Los Angeles Times warned breathlessly of a winter war footing. San Francisco, the home of a million companies cashing in on environmental panics, received 130% of average rainfall. Sacramento, where terrible ideas from San Francisco go to become law under a Democratic supermajority, is at 160%.

Governor Jerry Brown had signed an executive order last year making temporary drought restrictions all but permanent. “Drought is becoming a regular occurrence,” Executive Order B-37-16 stated. Then the proposal to “Make Conservation a California Way of Life” had made a big splash among bureaucrats.

“California is currently in the grips of an extreme drought with record low precipitation,” it gloomily began. Then the Sacramento River flooded, the downtown rainfall record was broken and copies of the report came in handy as makeshift umbrellas by scurrying staffers. So there was nothing left to do but blame Global Warming.

After years of predicting that California’s future would be a barren desert, the predictions have been slightly revised. California is now doomed to alternate between droughts and storms. And if it rains cats and dogs over Death Valley, we will be told that Global Warming causes canine and feline precipitation and that unless we agree to give Al Gore more money, we’re doomed to be brained by falling felines. Jerry “Moonbeam” Brown believes in Global Warming the way that the followers of his old pal, Jim Jones, believed in drinking poisoned Kool-Aid. He’s even prepared to put his satellites where his brain is.

“We’ve got the scientists, we’ve got the lawyers and we’re ready to fight,” Brown ranted to the American Geophysical Union. “If Trump turns off the satellites, California will launch its own damn satellite.”

Anyone who doubts that Governor Moonbeam can launch his own satellite ought to take a close look at how well high-speed rail is coming along. After being backed by Obama’s stimulus plan in ’09, the first and easiest leg of it has lately been delayed by four years. The stimulus money has to be spent by next year and there’s no way to pay for any of the rest of it except with more global warming taxes.

At this rate, the magic anti-Trump satellite would cost $100 billion and be ready to go by 2054.

But that’s pocket change considering how much money California has already spent and lost on Governor Moonbeam’s obsession with the Great Green Apocalypse.

Brown demanded that Obama institute a permanent ban on offshore drilling. Offshore drilling might even produce enough money to fund his high-speed rail obsession. But math and Moonbeam have never been on speaking terms. He doesn’t have policies. He has dreams.

“My own belief is that California has a unique place on the planet. It’s been a place of dreams. We can pursue a path of benign energy,” he once said. 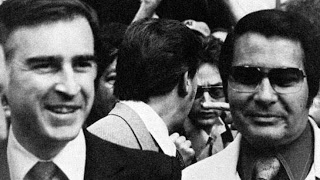 The drought has allowed Brown to pursue his dreams. Global Warming is a crisis in search of a disaster. Warmunists struggle to tether it to any natural or unnatural disaster from random hurricanes to the civil war in Syria.

An op-ed at the Los Angeles Times asked readers to see, “the devastation of climate change in the ruins of Aleppo.” It makes the fashionable claim that the war wasn’t caused by Sunni-Shiite hostilities but by, what else, drought. Syria has apparently been suffering from the “worst drought in nine centuries.”

Who knew that detailed rainfall records had been kept in Syria for nearly a thousand years?

The civil war in Syria might be explained by the 900 year drought, but what about the wars in Yemen, Libya, the Sinai, Mali and countless other places as part of the Arab Spring? Was there a drought in the eighties during the last Sunni-Shiite civil war in Syria between Assad Sr. and the Muslim Brotherhood?

Or during any of the countless wars that have been taking place in the area for thousands of years?

California’s current drought is said to be the worst in 1,200 years. Others insist it’s merely the worst in 500 years.

Who knew that hunter-gatherers without a written language could keep such careful records?

But it’s all about how you define “drought”. The Great Drought of the 1860s was a good deal worse in lack of rain and in the devastating impact on California. There were drier years far more recently than 1,200 years ago. And there wasn’t a whole lot of industry in California in the 1860s to blame it on.

To call this the worst drought in 150 years, never mind 1,200 or 12 billion years, you have to customize the definition of “drought” to make it so. Like so much of Warmunism, you draw the target around the arrow. And once you have your crisis, then you can use alarmism to make a massive power grab.

“I think this almost has to be at the level of a crusade,” Governor Brown declared.

Now Brown’s crusade is all wet. But Warmunist alarmism recovers quickly every time the world
doesn’t end at the stroke of midnight. In the seventies, environmentalists were promoting Paul Ehrlich’s claims that 65 million Americans would starve to death a decade later. At the British Institute for Biology, he predicted that, “England will not exist in the year 2000”. Today Ehrlich, the president of the Center for Conservation Biology at Stanford University, is predicting that we’ll soon have to turn to cannibalism.

If you doubt any of this, you must hate science.

Later the panic switched to predicting an ice age. The various doomsday scenarios under the umbrella of “climate change” have kept rotating in and out like bad actors on a cheap stage.

A 2003 DOD report envisioned flooding could producing an inland sea in California. Recently the National Research Council report, sponsored in part by California, warned that San Francisco International Airport could be flooded in a few decades. The worst drought in 12 billion years made for some better headlines because the drought, unlike most of the other scenarios, actually existed. But before long the Green Apocalypse crowd will be predicting a California buried under mountains of ice.

Natural disasters are the drama that lubricates a corrupt government industry which deprives ordinary people of water, food, heating and life out of a combination of ideological hostility to technology and the flow of money to special interests in the business of saving the planet from a manufactured crisis.

The California state budget approaches $180 billion. That’s a 5% increase in only one year. But being an “international leader” in fighting “climate change” doesn’t come cheap. The new budget grabs even more cap-and-trade power to be spent on Big Green Business and reinforces the illegal tax for auctioning off “pollution” allowances. And then there’s e money for the high-speed rail to nowhere.

None of this will stop droughts or storms. But it will move money to the right people. The ones, like Al Gore, living in luxury condos in San Francisco about to be flooded by the Great Green Apocalypse that never comes. And it’s always been about the money. Everything else is theater. Rain or sun, flood or drought, the scripts get rewritten, the bills get passed and the Global Warming show goes on.

Robert Spencer: "The Hill" Bows to the Islamic War on Free Speech