Citizens in Southern California are angry and fighting back against politicians who want to create or keep sanctuary cities.

A group of concerned citizens showed up to city hall in Rialto on Friday, Dec. 29 after they learned about a meeting being held between newly elected Councilman, Rafael Trujillo and immigration activists. The meeting according to an email was to be focused on turning Rialto into a sanctuary city.

“If you want to come by and listen……….. You are invited to the first meeting of the Rialto Sanctuary City Committee Meeting Friday, December 30, 10:00am at City Hall, 150 S. Palm Ave in Downtown Rialto. This is a small group meeting focused on Rialto residents who want to help lead us into the work that needs to be done. There will already be organizational leaders in attendance like Maribel Nunez, TODEC, and LULAC. Refreshments will be served. Rialto wants to be a sanctuary city.”

A group called, “We the People Rising” who are dedicated conservatives from around Southern California and at least one member of the Remembrance Project, a group that advocates for families whose loved ones were killed by illegal aliens wanted to learn more about this meeting so they stopped by the Rialto City Hall.

Arthur C. Schaper from “We the People Rising” asked Trujillo if he was meeting with people to discuss sanctuary cities. 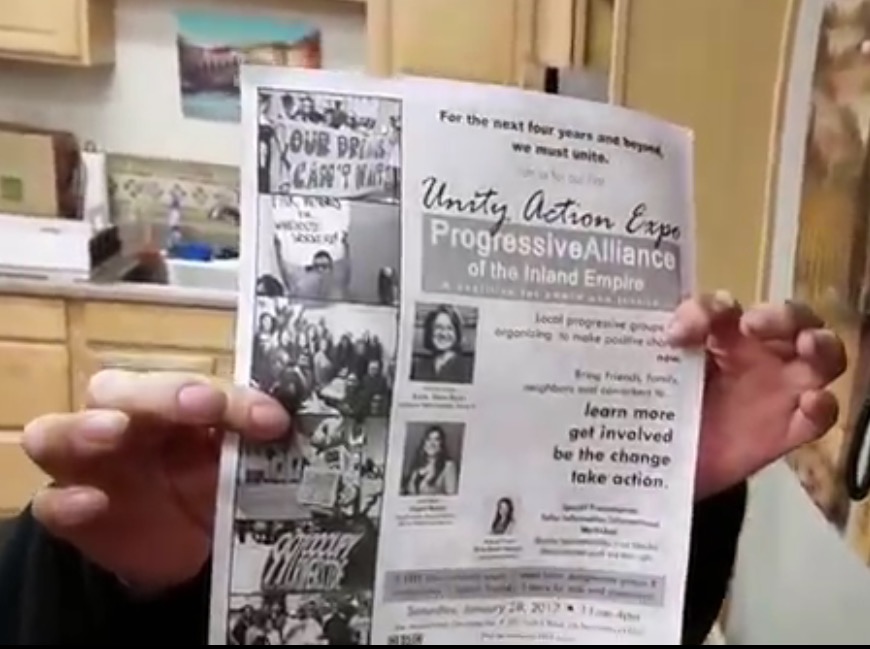 “I am just listening to them,” said Trujillo. The people Trujillo was meeting with gave Schaper a flyer to show they were represented the group, “Progressive Alliance of the Inland Empire” (PIAP) based out of San Bernardino, California.

Schaper kept repeating to Trujillo and the progressive group that sanctuary cities were against federal law.

Agnes Gibboney with the Remembrance Project asked Trujillo, “An illegal killed my only son and you want to make this city a sanctuary city on my tax dollars?”

Gibboney said to Trujillo, “I legally immigrated to this country and did everything the correct way. My son paid with his life. Until you have lost a child to an illegal alien a senseless murder you don’t smirk, you don’t know the pain that it caused. You have to man-up and say no to sanctuary cities.”

Schaper said Cano’s presence at the meeting showed how corrupt the local media have become. “They are helping push the whole “poor undocumented immigrant” mantra though this country,” said Schaper.

Further deepening the appearance of collusion among elected officials to thwart federal laws on immigration occurred when Councilwoman Blanca Gomez from Victorville showed up in the middle of the standoff for a meeting that Trujillo originally said was just for his constituents.

The group from “We the People Rising” are furious with Trujillo using his newly elected position to support the promotion of sanctuary cities, to using the media to lobby for amnesty, portraying the illegal aliens as victims, while law-abiding citizens are shown to be heartless for opposing illegal immigration.

“It’s time for the stories of American families to be heard, the families who have lost loved ones to illegal aliens,” said Schaper. “The rule of law matters and the need for proper reporting from a faithful, robust, independent press is essential.”

Here is a video of Councilman Trujillo canceling his meeting, calling for a police escort and evading questions: