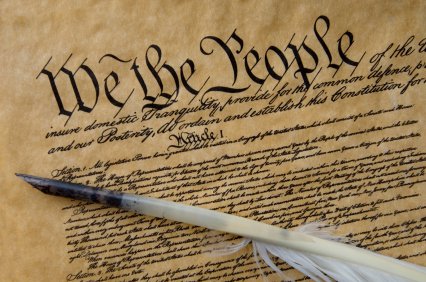 Free speech is typically championed on college campuses…unless you’re a Conservative student who wants to share Liberty with your fellow classmates, apparently.

Heaven for forbid young adults actually open up a pocket Constitution and discover the individual power our Founding Fathers had actually intended for them.

In the latest college campus ‘snowflake’ insanity, students at Kellogg Community College, a small public college located in Battle Creek, Michigan, were arrested and forced to spend a night in county jail for refusing to stop handing out pocket Constitutions on school grounds last September.

“According to the complaint, filed on the students’ behalf by the Alliance Defending Freedom, Michelle Gregoire, Brandon Withers, and three other students “tried to distribute pocket-size copies of the United States Constitution in an open, generally accessible area of the campus outside the Binda Performing Arts Center,” but they were told to stop their efforts because “they had not first obtained a permit and because expression was only permitted in one location.”

Gregoire and Withers, both members of Young Americans for Liberty, a national student organization promoting constitutional conservatism, then made the mistake of engaging “interested students in conversation about liberty on campus,” which led to KCC officials demanding they stop because they were “impeding students’ access to education.” Gregoire and Withers “politely informed KCC officials that they planned to continue to exercise their First Amendment rights.” Withers and two others were subsequently placed in handcuffs, forced to spend the night in county jail, and charged with trespassing.”

The charges were soon dropped, but KCC’s message was clear: Free speech is not welcome on campus, especially if you’re conservative.

Cliff Maloney Jr., president of Young Americans for Liberty, stated:
“Campus security literally showed up to the YAL chapter’s national Fight for Free Speech campaign event and arrested students for peaceably handing out pocket Constitutions. Remember, this is a public, American tax-payer funded community college. A place that is supposed to not only uphold the Bill of Rights, but set an example for its students. Yet, the administration’s actions are a direct violation of the First Amendment. Who knew the Constitution was so controversial? Time in the slammer for handing out pocket constitutions? This is insane.”

Mike Pence: 20% of Taxpayer Funding for Trump Transition Will Go Back to US Treasury